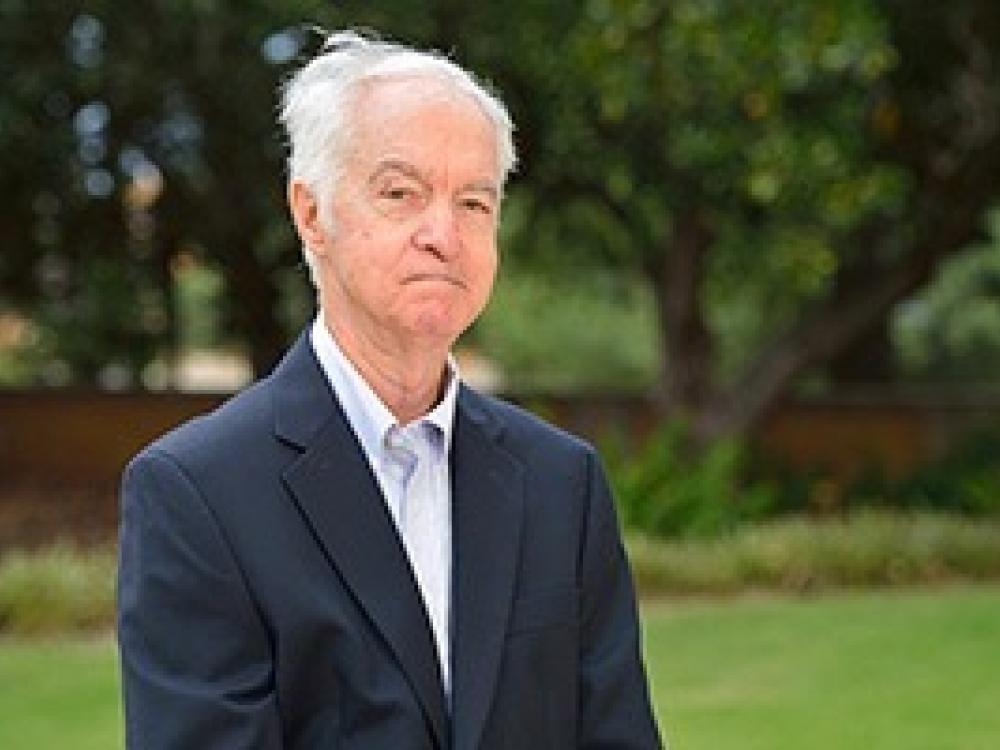 Dr. Stan Ingram has brought back the environmentally-themed journal that he originally founded more than 20 years ago. Photo courtesy of Michael Clements/the North Texan.

After a seven-year hiatus, a North Texas-based journal focused on a hopeful future has returned to publication.

Founded by professor Stan Ingman in 1997 as part of the university’s public outreach efforts, the Sustainable Communities Review is a semiannual journal that reports the progress of people around the globe who are working on solving a wide range of social and environmental problems that threaten the well-being of small communities and even the world population.

“The simple definition of sustainability is that we have an economy that nourishes us but does not contaminate the planet to an extreme nature,” Ingman says. “We know that there’s always going to be a kind of loss. You can’t produce something without having some sort of side effect, but maybe there are ways of recovering what we’ve lost, like planting three trees whenever we cut down one.”

Ingman says the journal will draw on contributions from more than 70 affiliates working in academics, non-profits and government who are making progress in what he calls the four-Es of sustainability: the environment, enterprise, education and empowerment.

Emphasizing environmental issues, the journal takes an expanded view of sustainability by addressing not only obvious subjects such as renewable energy and eco-friendly building practices but also poverty, the dropout rate and even drug addiction -- anything that keeps societies from enjoying a fulfilled existence.

The heart of the peer-reviewed journal will be the contributions of professionals involved directly with sustainability issues; however, it will also give a voice to school-aged children in order to help the next generation feel more invested in the problems they’ll inherit. The Fall/Winter 2017 issue, the first in nearly a decade, published in September. It includes an essay in Spanish from a Costa Rican middle-school student.

The heart of the peer-reviewed journal will be the contributions of professionals involved directly with sustainability issues; however, it will also give a voice to school-aged children in order to help the next generation feel more invested in the problems they’ll inherit.

Two other articles in the current issue are an update on urban farming in Berlin and an exploration of the challenges of managing invasive lionfish in Costa Rica.

The reader-friendly journal is a free, online-only publication targeted at anyone who’s interested in building better communities. Ingman says he expects another issue to come out in March 2018 and the journal to continue its semiannual schedule indefinitely as he hands its operation over to his younger colleagues. Now 78, Ingman says he has no plans to retire but that it’s time for new blood to take the reins of the journal.

Ingman’s academic background is in applied gerontology. At UNT, he’s developed the Texas Institute for Research and Education on Aging where he helped create the Fellowship Program in Geriatric Medicine and Dentistry; the Texas Center for Geriatric Education; Seniors and Volunteers for Childhood Immunization; and the National Academy for Teaching and Learning about Aging.

Although there is some overlap between his academic accomplishments and sustainability, his interest in the natural world and seeing people take care of the planet comes from his earliest memories and have led him to take up issues all over the the world, from helping refugees of civil war in Algeria to more recently promoting affordable housing for low-income seniors in Denton.

“I’m from West Virginia; I roamed the hills as a scout. I was a Junior Scout Master planting trees, so I have a background in nature.” Ingman says of the origins of his interest. “I used to be a nature counselor at camps, a canoe guide, a squirrel hunter and rattlesnake skinner – stuff like that.”

Handing the journal over to his former students is part of a much larger legacy he’s worked to give to the next generation. Through the journal, he hopes readers will be inspired to set their minds on “figuring out how we can best exist on this planet without harming it so much, in what we can call the physical way,” Ingman says. “And then there’s a second message in that – that we exist here socially with as little conflict as possible, building communities where we develop the individuals to have as good of a life as they can have.”

About: Founded in 1997 and revived in 2017 after a seven-year hiatus. The journal is produced by the University of North Texas that “merges traditional concerns for the environment with the social and cultural aspects of community life. The Review features cutting-edge thinking in a reader-friendly style.”