Twisted Root Saves the Day, at Least for One Lion 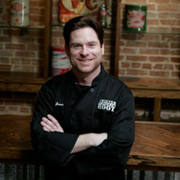 Boso was recently contacted in an email by In-Sync Exotics Wildlife Rescue and Education Center in Wylie, TX. The Rescue and Education Center had a sick, eight-year-old male lion named Aramis who “will only eat elk and we are out," the email read.  Boso thought it was a joke, but when he called the wildlife rescue he found out the story was true.  As luck would have it, Twisted Root’s elk shipment had just come in from Comanche Ranch. (photo: tisted root)

So taking the entire 53 pounds, Boso delivered it to In-Sync Exotics immediately.  "When I hand-delivered the meat, it was awe-inspiring,” says Boso. “In-Sync Exotics Wildlife Rescue & Educational Center has such an incredible group of people who devote themselves to providing care to all exotic felines and they are truly working to help better our world." 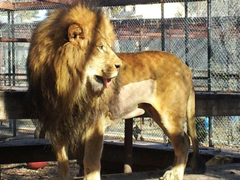 According to Vicky Keahey, President of In-Sync Exotics the meat Boso brought should last Aramis two weeks and they are hoping that will be enough time for Aramis to be healthy again.  “We only know that his liver enzymes were very high and he wouldn't eat and was vomiting every day,” Keahey says. “But Aramis is on the road to recovery now.  We just have to keep him eating. Of the number of things we think may have been wrong, the vet has said that keeping him eating and well-hydrated will be his best shot of complete recovery.”  (photo: In-Sync)

In-Sync Exotics Wildlife Rescue and Education Center rescued Aramis in July of 2011 from, what they describe as, “same of the most horrible conditions I have ever seen,” Keahey explains.  Apparently there were 20 cats living in a horse barn surrounded by their own feces with no food or water. From the 20 cats that they rescued from the location six of them have passed away and Aramis is the only male lion left from that rescue.

"Never in a 100 years did I think I would be able to help a sick lion," Boso says, adding “Heck, yeah,” when asked if he would do it again.
“I like saving animals, it makes my day," he concludes and, while elk was not on the menu that day at Twisted Root, they were able to replenish and serve elk burgers again to customers just two days later.

For more information on In-Sync Exotics, dedicated to the rescue of neglected, abused and unwanted exotic felines, visit http://www.insyncexotics.com.

Rita Cook is an award winning journalist who writes or has written for the Dallas Morning News, Focus Daily News, Waxahachie Daily Light, Dreamscapes Travel Magazine, Porthole, Core Media, Fort Worth Star Telegram and many other publications in Los Angeles, Dallas and Chicago.  With five books published, her latest release is “A Brief History of Fort Worth” published by History Press.  You can contact her at rcook13@earthlink.net