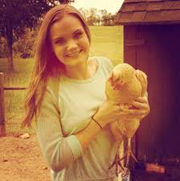 Alexandria Beck founded this student animal advocacy group at the University of North Texas in 2013. Its mission is to promote awareness through education and outreach regarding how we interact with animals, and how that impacts their lives, our lives, and the environment. Last year, the group launched a campaign to get all dining halls on campus to serve cage-free eggs by the end of the school year in 2014. As a result of a successful campaign led by Alexandria, in January, UNT Dining announced it is committed to using only cage free eggs on campus by fall of 2014. With the support of the Humane League of Dallas, Alexandria then spearheaded a protest urging Southwest Airlines to end its partnership with SeaWorld. The demonstration received national press coverage.

The Meyers were there at the very beginning of the Dallas gas drilling fight in 2009 and are the beating heart of DRR. Claudia attended every single Task Force meeting, City Plan Commission meeting and hearing on the Trinity East permits and every Plan Commission and Council meeting on the new ordinance. She made appointments, wrote e-mails and lobbied. In addition, she ran for Dallas City Council, with drilling an issue in her campaign. Even though she lost, she won great respect among other council members and candidates and added members and momentum to the cause.

Jan has dedicated herself to preserving wildlife, their habitats and open spaces. During 30-plus years in a demanding corporate job, Jan supported numerous environmental causes by attending hundreds of meetings, serving on boards, organizing and participating in educational events, testifying at hearings and pitching in on volunteer workdays. The Fort Worth Audubon Society, Sierra Club, Arlington Conservation Council, Fort Worth Nature Center, Tarrant County Master Naturalists and Molly Hollar Wildscape can always count on Jan. She recently took leadership positions at Friends of the Blackland Prairie and Friends of the Southwest Nature Preserve.

Show your support for the inspiring work being done by the DFW green community. Register to attend the Green Source DFW Sustainable Leadership Awards ceremony.