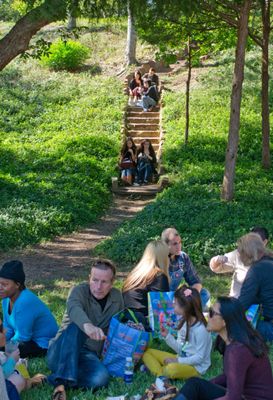 By Julie Thibodeaux. Photos by
Karl Thibodeaux and Phillip Shinoda.

Reverchon Park in Dallas provided a lush setting to get your greens on at The Texas Veggie Fair on Sunday. The wooded park was bustling with vegans, vegetarians, the curious and the not-yet-converted for the fourth annual gathering.

Vegan comfort food was plentiful with long lines to buy vegan versions of everything from po’boys and pizza to cheesecake.

Here's a gallery of the plant-eating folks we met: 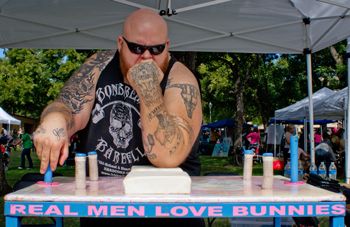 Big Bald Mike, an Austin-based arm wrestler, showed his softer side at his bunny-friendly booth. He’s on a mission help save animals, the environment and people who suffer from drug, alcohol and junk food addiction.

“People need role models to see you don’t have to eat meat to be strong,” he said. 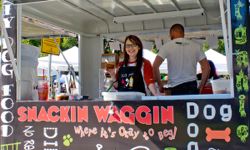 As fitting for an animal-friendly festival, dogs were out in full force, many standing in line at the Snackin Waggin. 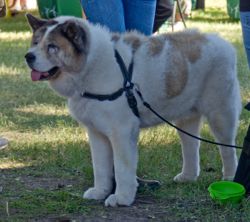 Proprietor Melanie Fox said the vegan dog treats made of oat flour, peanut butter and carob chips could be shared by humans and canines alike.

“But they don’t have sugar, so they’re kinda bland,” said Fox, who admits they look tempting. All proceeds go to Hound Haven Dog Rescue. 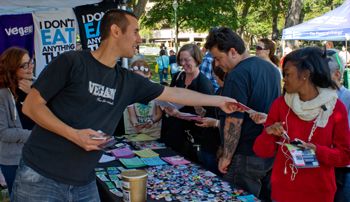 Buttons, stickers and T-shirts bearing animal welfare slogans were plentiful, including at this Action for Animals booth.

Below, Savanna and Cynthia from Animal Connection of Texas promote direct action against abuse of animals. 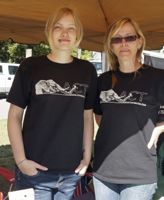 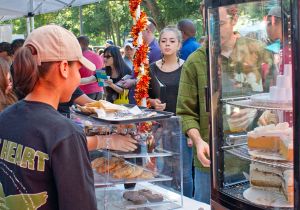 Above, customers in line at Reverie Bakeshop’s booth were anxious to get a peek at the vegan cheesecake and cupcakes. 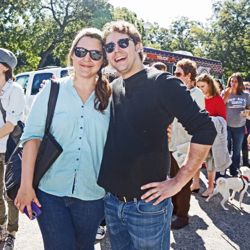 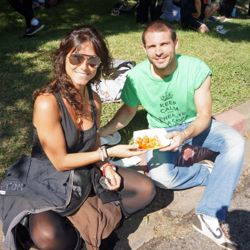 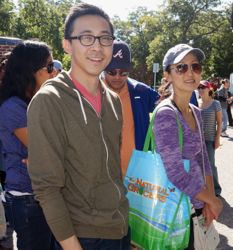 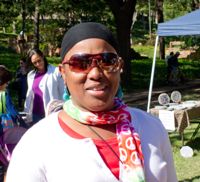 Right, Chef Tonne Khabir, who works as a healthy eating consultant for the U.S. military, said she was vegetarian for 15 years until she married a meat-eater. Now that they’re no longer together, she said she’s planning to return to the veg lifestyle. 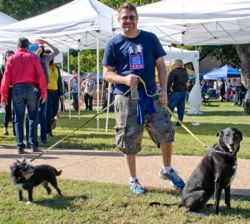 Doug Silver, with Puffin and Cricket, admitted he is not vegetarian but his vegetarian girlfriend has influenced his eating habits. He reported that the veggie corn dogs were better than traditional ones at the State Fair. 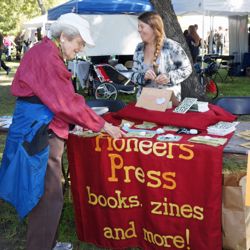 Below, the veg-friendly folks from the Promise of Peace Garden. 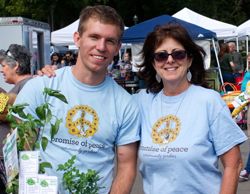 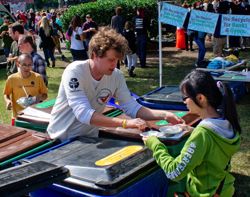 (Page one: Marissa, Richard and Sarah partake of vegan quesadilla samples given out by Whole Foods.)