Who knew Dallas is home to the nation’s largest urban forest? The Texas Trees Foundation does – and last week it announced its State of the Dallas Urban Forest report. This summarizes the latest of three research projects, starting in 2010 – and sets a springboard for a massive tree planting effort.

Dallas has about 14.7 million trees now.

About 37 percent of the canopy is located south of Interstate 30. 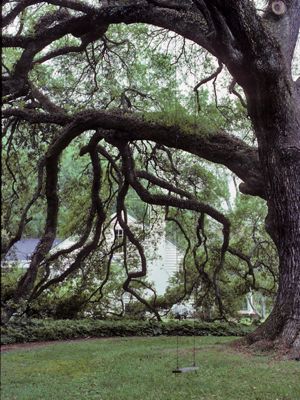 The Texas Trees Foundation’s goal is to expand the tree cover over more of the city and beyond, citing the USDA Forest Service's recommendation for 40 percent coverage.

This won't be a Johnny Appleseed-style sow-as-you-go effort. In 2010, TTF identified 1.8 million target tree-planting sites, based on environmental criteria.

For starters, TTF is planning and building partnerships for four projects, detailed by president and CEO Janette Monear.

Right, According to the Texas Trees Foundation, only 2 percent of the Dallas tree canopy is comprised of  live oaks, but they account for 10 percent of all tree benefits. Photo courtesy of Andy and Sally Wasowski/Lady Bird Johnson Wildlife Center.

"’Greening Medical Mile’ in the Medical District along Harry Hines Boulevard at Mockingbird and Inwood will bring the healing effects that research shows benefit patients.”

“For ’Cool Schools,' we’re exploring collaboration with DISD to bring environmental learning areas and trees to school yards. We want ‘no child left inside,’ “ Monear quipped.

"'Neighborwoods Groves’ will work with 14 City Council districts to transform trails and rights-of-way. Development without ecological health is not sustainable,” concluded Monear.

TXU Energy has been a 15-year partner of Texas Trees Foundation. Wells Fargo just signed on to the Tree North Texas initiative, granting $160,000. This is part of Wells Fargo's Sustainable Communities campaign to provide cities $100 million for green infrastructure by 2020. TTF is one of the first three recipients. 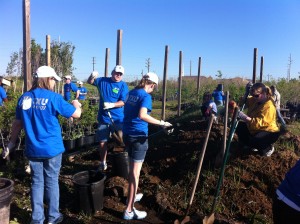 The Texas Trees Foundation also garners support from more than 30 companies and organizations, a long list of prominent private donors, and scads of volunteers.

“We average 3,000 volunteers and 100 projects from plantings to programs, each year,” said Monear.

In siting trees, the Foundation's 2010 study viewed “hot spots” around the city, where pavement and structures magnify heat, creating what’s called the "urban heat island” effect. Urban summer temperatures in Dallas range 2 to 4 F degrees higher than outlying rural areas, according to the U.S. Environmental Protection Agency. This raises energy costs, increases ozone and volatile air pollutants, and threatens public health. Tree planting can reduce urban temperatures by 5 to 22 F degrees, depending on the region of the country, according to the Trust for Public Land.

Bobby B. Lyle, Dallas developer and  chair of TTF’s Board, cited gains from trees to "cool more rapidly than other methods… absorb water to abate floods, absorb carbon and purify the air.”

It’s unclear if the total tree population of Dallas has grown in that time. TTF has not reviewed aerial photographs of 30 years ago.

“My guess is, we would see loss in some areas, and lots of gain in many,” said Grubisich. ”North Dallas was largely prairie, and 90 percent of trees north of downtown were planted.”

This summer, the foundation will be reviewing the tree count by comparing new aerial photographs to ones taken in 2009.

And seeing who else will sign on, to help make their 3 million tree dream a reality.