This Summer... Beating the Heat With Clean Cars

By Anonymous (not verified) 0 Comments 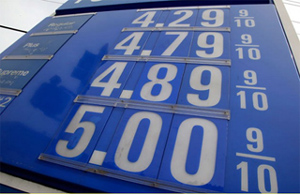 Rapidly rising gas prices across the country are shining a spotlight on the dire consequences of America’s dependence on oil. The transportation sector accounts for nearly two-thirds of the more than 19 million barrels of oil consumed each day in the United States.

The largest percentage is consumed by passenger cars and light duty trucks, such as SUVs, vans, and pickup trucks.

And Americans are expected to spend more than $130 billion at the gas pump this summer as prices across the country exceed $4 per gallon.

However, it is possible to reduce consumption by requiring automobile manufacturers to meet strong global warming pollution and fuel efficiency standards.

An analysis by the Environment America Research and Policy Center found that if cars and trucks today met a 60 mpg standard, Americans would save $67 billion at the gas pump and cut gasoline consumption by 17 billion gallons this summer. The average American family would save $513 in just three months. Not only could you afford to drive out to the beach, but now you could book a hotel there and stick around for a week. While families in all 50 states would experience similar savings, those in California, Texas, Pennsylvania, Florida and New York would see the largest overall consumer savings and the largest reductions in gasoline consumption.

Automakers have developed plug-in hybrid cars that can travel 100 miles on a gallon of gas and U.S. auto dealers are just beginning to sell electric cars that can go more than 200 miles on one charge. Additionally, several techniques are already being used to make conventional internal combustion engine vehicles more efficient.

Recognizing this, the Obama administration is currently developing new fleet-wide fuel efficiency and global warming pollution standards for cars and light trucks through 2025.

In October, the administration released an analysis that automakers can cost-effectively turn a 60 mile per gallon standard into a reality.

By requiring average cars and light trucks to achieve a standard of at least 60 miles per gallon by 2025, the administration would save Americans $101 billion at the gas pump each year and cut our oil consumption by nearly 3 million barrels of oil per day by 2030—nearly three times the amount of oil we currently import from Saudi Arabia.

This is a very abbreviated revision of Environment Texas' new release:  Summer Gas Prices: Beating The Heat With Clean Cars.