Electric vehicles are coming to North Texas. If Dallas is to successfully leverage this technology into a system for sustainable transportation, collaboration will be critical.

If they build it, will we come?  Utilities, auto industry execs, retailers, and planners are hopeful as they engage in a massive electric-vehicle readiness initiative to bring cleaner transportation to the Dallas/Fort Worth Metroplex.  Theirs isn’t another pie-in-the-sky vision for the 21st century; it’s a reality unfolding this year.  In 2011, NRG Energy will install upward of 70 car-charging stations in across Dallas and Forth Worth.  As the Nissan Leaf and the Chevy Volt begin penetrating the D/FW market, NRG aims to capture the revenue stream from charging car batteries here just it is doing in Houston.  NRG’s news comes on the heels of TXU’s announcement of its own installation of twelve public charging stations being allocated across Dallas and Fort Worth. 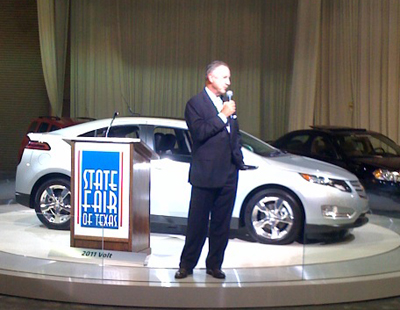 I’ve been watching the wave for several years.  As part of my work with emerging companies in this space, I’ve attended numerous local and national conferences on electric vehicles.  Observing stakeholders - many of them competitors - come together month after month to swap ideas, network, and hammer out standards has been an education in the necessity of collaboration in fostering sustainable development. Such cooperation hasn’t been guided by idealism so much as survival in a market that, until recently, was practically non-existent.  As a speaker at one conference joked, “We’ve got to build up the market before we tear each other down.” Because the early players are pioneering the standards for this new industry, having a seat at the table is also a competitive advantage. (In a few short years I’ve also seen start-ups that have failed to collaborated fail fall by the wayside.) 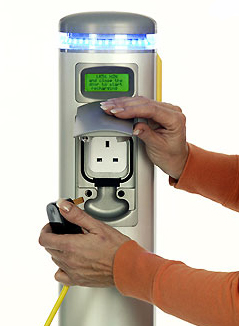 Profit-making may be the impetus behind this collaboration of electric-vehicle manufacturers and suppliers with city governments and utilities, but others at the table have their own agendas for getting involved in EVs readiness.  Dallas, for example, is in Serious Nonattainment status for ozone pollution, so our region risks losing funding if we don’t clean up our air.  “Seventy percent of air pollution in Dallas comes from on-road/off-road vehicles, so EVs can play a substantial role in resolving this,” said Jennifer Cohen, executive director for the North Texas Clean Air Coalition.  Cohen was one of the main organizers of the Electric Vehicle North Texas (EVNT) Electric Vehicle Showcase last September at the State Fair of Texas.

Representatives from manufacturers, utilities, and city officials shared their perspectives on the importance of collaboration during a panel at the Electric Vehicle Showcase.  Betsy del Monte, Director of Sustainability for Dallas-based construction giant BECK, explained, “Mass transit alone cannot solve our problem.  We also need to look at the broader picture in terms of development. Of the palette of materials that we have available, EVs are one of the tools we must come to rely on.”

Tom Reddoch, Director of Energy Efficiency for Electric Power Research Institute, agreed. “I’m especially encouraged with the mobilization effort in North Texas,” he told us. “This is a success story.  EPRI is connecting two giants, the electric industry with the auto industry.” To assist stakeholders with the information they need to build communities that can sustain a transition to electric vehicles, EPRI is focusing on 3 key areas: 1) understanding consumer attitudes, which are regionally driven; 2) installing charging infrastructure in order to ensure a positive response for the drivers’ first experiences; and 3) utility readiness.   “We have plenty of capacity to go around, especially if people charge at night,” said Reddoch, “but there could be localized effects where cars cluster.  The construction community, developers, and architects need to address this together.”

At a technical level, tools are emerging that can help various stakeholder groups manage the moving parts required to integrate electric vehicles in the transportation landscape.   “We’ve arrived at an interesting nexus between the power industry and the auto industry,” said Brad Gammons, Vice President Sales and Solutions, Global Energy and Utilities Industry, for IBM. “This unique collaboration requires sharing of information and systems.  The biggest issue is standards.  There is not going to be a dominant leader so we need standards across the value chain.”

“China is heading for another 400 million people moving into its cities,” explained Gammons.  IBM is helping set up the capacity to network and the infrastructure to do integrated planning. The same is the case in the EV sector.  You have to start thinking in terms of systems.  This is not a natural occurrence.  Collaboration ensures that things happen efficiently.”

Not all collaboration requires complex software.  Most of it is happening on the ground, person to person and city leader to city leader. The installation of electric vehicle charging infrastructure in D/FW is giving two cities with a long (if friendly) rivalry a chance to mutually benefit by working together. “To get the mayor of Fort Worth to travel to Dallas to talk about EVs is huge,” said Jim Greer of Oncor during a reception for the Electric Vehicle Showcase.

Collaboration helps speed up consumer education, which is vital given that the general public’s understanding of electric vehicles is minimal.  Range anxiety continues to be a barrier to adoption, even though three-fourths of Americans commute less than 40 miles per day.  “To handle range anxiety, we need to provide home-based charging capability,” said del Monte from BECK.  “The way to form a reliable charging network is public-private partnerships.” 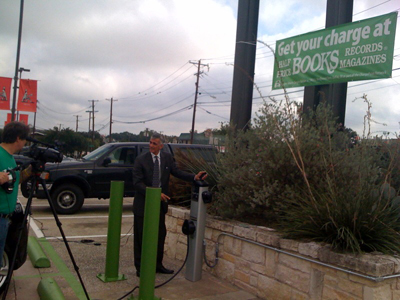 Clever retailers can also play a role and the benefits as well.  For example, a retailer can spend $3,000 for one month of public relations services or several months worth of advertisements – or take that same money and install an EV charging station to earn media coverage, new customers, and loyalty from green enthusiasts.  Undertaking this strategy, Half Price Books unveiled Dallas’ first public charging station, beating other retailers to the punch to offer this perk to drivers.  Granted, there’s not a line for the EV charger around the block yet.  But just having it there at one of Dallas’ most popular bookstores sends a tangible signal to drivers that the future is here and now.

The infrastructure is getting into place, but drivers will be the key to making this thing go.  The question remains: will we buy the cars?  We’ll find out very soon. The Chevy Volt is scheduled to arrive on car dealers’ lots in Dallas-Fort Worth in March.

Anna Clark is the author of Green, American Style  and the president of EarthPeople. She lives in one of Dallas’ first residences to earn a Platinum-LEED certification from the U.S. Green Building Council. You can contact her at anna@earthpeopleco.com.

Anna Clark is a Dallas-based journalist and author of "Green, American Style." She lives in one of the first residences in Dallas to earn a Platinum-LEED certification from the U.S. Green Building Council. She is the president of EarthPeople Media. Contact her at Anna@EarthPeopleMedia.com.