Second March Against Monsanto to be held in Dallas Oct. 12 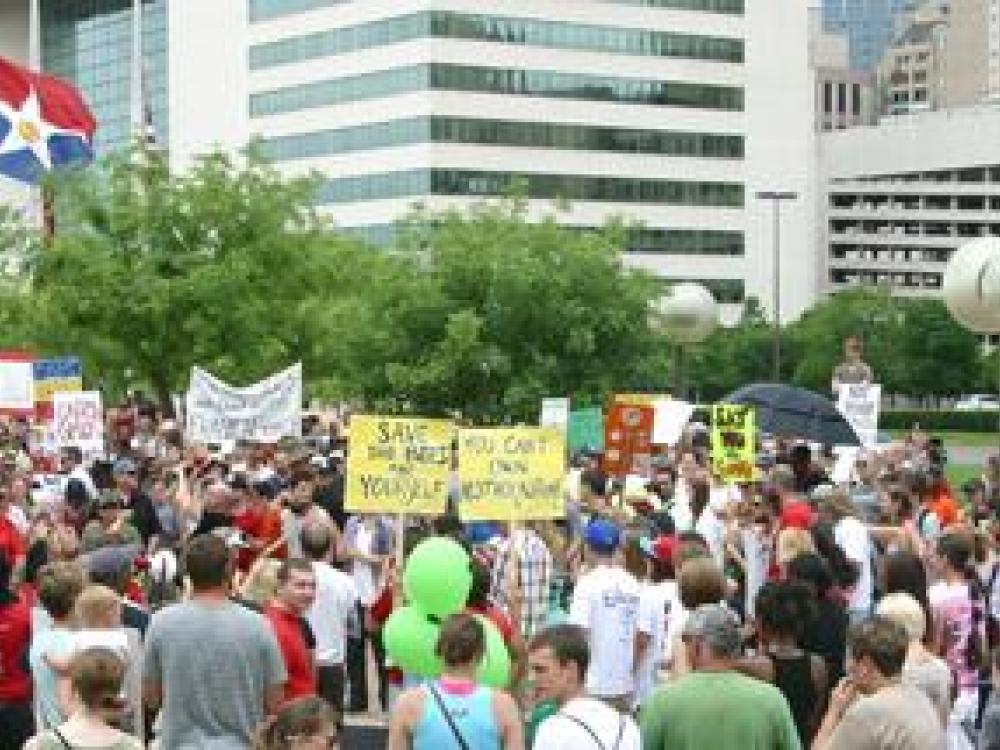 March Against Monsanto May 25, 2013 in Dallas. Photo: Phillip Shinoda.

In May, hundreds of North Texans took to the streets in Dallas and Fort Worth to join a world wide protest of the agricultural-industry giant Monsanto. Now another global March Against Monsanto is planned to coincide with World Food Day, and Dallas is among more than 200 U.S. cities planning protests, along with 52 countries, on Oct. 12. The Dallas March will start at 1 p.m. at Dallas City Hall.

Dallas resident Cindy Freeling said she and three others have taken over the march from Jessica Winters, who organized the spring protest in Dallas. Freeling has had a longtime interest in food issues, having worked in health food stores in Los Angeles. She also hosted an alternative health radio show. 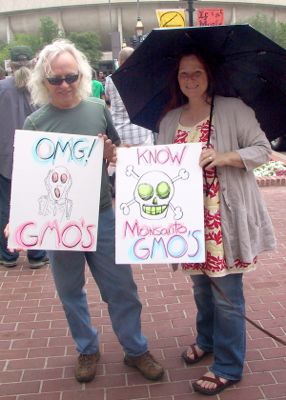 Freeling said she became concerned about genetically modified organisms or GMOs, when she developed an adverse reaction to food products with corn. When she didn’t react to non-GMO popcorn, she suspected GMO corn could be the culprit.

While the Union of Concerned Scientists says the risks of genetic engineering in agriculture has sometimes been exaggerated, the watchdog group affirms it has the potential to cause health problems and environmental harm.

According to its website: “GE crops may produce new allergens and toxins, spread harmful traits to weeds and non-GE crops, or harm animals that consume them.”

Don and Debora Young at Fort Worth protest in May. Below, Fort Worth bee hugger. Photos: Julie Thibodeaux 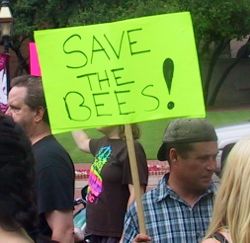 As concerns about GMOs have grown, fingers have pointed to the world’s biggest producer of genetically engineered seed, Monsanto, which has been criticized for its bullying business practices.

The Center for Food Safety found the world’s leading agricultural biotechnology company has used “heavy-handed investigations and ruthless prosecutions” in its effort to control patents on genetic engineering technology, seed germplasm and a farmer’s use of its engineered seed.

According to CFS's 2005 report, Monsanto, with an annual budget of $10 million dollars and a staff of 75 devoted solely to investigating and prosecuting farmers, had filed lawsuits against 200 farmers and small businesses.

“They have no ethics,” said Freeling. “They need to be stopped.” 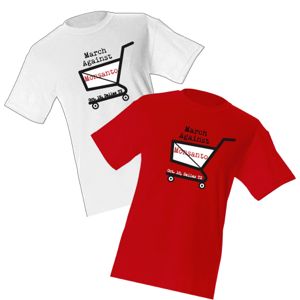 Freeling said she and Janis Levy, Kristie Hester and Angela Scott have been planning the October march since June. In addition to recruiting participants, they’ve produced special T-shirts for the event, made with organic cotton and sustainable ink.

They also redesigned the 2-mile route. The protest will again start at 1500 Marilla, however, this time it will proceed down Young Street, past the OmniHotel, the Dallas Morning News and the WFAA administration office, before circling back to City Hall.

They’re hoping this march will garner more media attention despite competing with Texas-OU weekend, the famous college football match that brings hundreds of people to the city.

“The last march brought so much awareness globally,” said Freeling. “More companies are saying they’re looking for non-GMO sources. Consumers are going to be the ones that change the policies.”