David Hickman is not only an artist, but also the ultra recycler. As he walks around his backyard he points out a number of his creations. However, it is the bold, blue greenhouse put together with a little of this and a little of that, which is his ultimate recycle project. 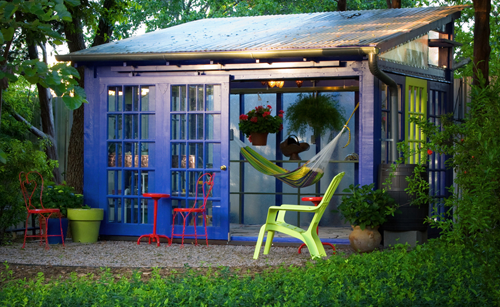 It sit behinds his home built in Dallas in 1941 and Hickman says the 12-foot-by- 8-foot building finished about three years ago was his wife’s idea from something she saw and cut out of a magazine.

“I could tell it [greenhouse] was made out of old doors and I thought that was a great idea,” Hickman begins as he explains how he put all the greenhouse pieces together.

“I started collecting doors and I had a few contractors who would call me if they were remodeling and had to take out a door. I did that for several years and most of the doors were in pretty decent shape so finally I was able to get all the doors I needed then I replicated the shape of the greenhouse in the photograph,” he says.

Hickman says his greenhouse actually turned out to be a bit larger than the one his wife had seen in the magazine, with a shed roof and basically made from a pole barn with four corner poles.

“The doors are used for infill so they are not really structural,” he explains. “Two of the doors we grafted them together and I had another item that I had always wanted to use – the sliding roller barn doors and so I had the roller and the hangers and we just turned those two doors into one big sliding door.”

Other recycled elements of the greenhouse include a chandelier that was pieced together and now is the perfect light fixture.

“We found two different sources, we found all these glass grapes that were wired together and made in England and we bought a box full in different sizes of clusters and colors and at some point I was going to make a light fixture with them and then after we built the greenhouse we decided maybe those grape clusters would work,” Hickman says.

He then found a metal frame, shortened it, wired it and put sockets on it along with adding three things in the middle for a total of six light bulbs. The racks in the greenhouse were recycled from a metal scrap yard, and Hickman says those had been in his storage for a few years until he figured out what to do with them. 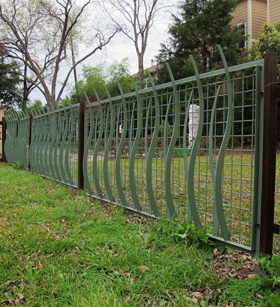 The greenhouse stays warm in the winter with a small heater, but Hickman says at some point he has a gas heater he wants to use instead, when he has the time.The little windows in the corners of the greenhouse are low-tech ventilation and, in keeping with a theme used in his garden on a fence he made that looks like grass blades, there are more of the metal grass blades used in the greenhouse along with a stone top from a table that Hickman got at the Terrell State Mental Hospital.

“I bought some salvage material there 25 years ago and one had a sink hole and a hole for a faucet so that became a sink and faucet here in the greenhouse.”

His wife also entertains in good weather having little lunches in the greenhouse too.

“We love just looking out and looking at the greenhouse since we built it for the love of own place, it was not easy,” Hickman concludes.

A former mechanical designer, Hickman has been creating art, mainly for municipalities and businesses for a number of years.

Wondering how to use some of the same material Hickman used in his greenhouse or that he uses for his other recycled artwork sculptures, he advises:

• Keep your eye out for items that you might find another use for (like in the greenhouse those doors could have been used for a sunroom versus a greenhouse). Be observant as to what is laying around and trying to think of ways to turn it around and make it something else.

• Don’t be afraid to try something different and be sure if you are going to use an item and you are asking it to support a lot of weight make sure it is strong enough to do that. If not, put something around it that will carry that load of the weight.

• Don’t be afraid if you have retrieved an item and you have held it for awhile and it starts crowding your space to see if someone else wants to take a crack at it.

• You have to look at things creatively. I will look at something and think I am going to do one thing with it and someone else looks at it and does something else - it all works.

Sign up for the weekly Green Source DFW Newsletter to stay up to date on everything green in North Texas, the latest news and events..

Rita Cook is an award winning journalist who writes or has written for the Dallas Morning News, Focus Daily News, Waxahachie Daily Light, Dreamscapes Travel Magazine, Porthole, Core Media, Fort Worth Star Telegram and many other publications in Los Angeles, Dallas and Chicago. With five books published, her latest release is “A Brief History of Fort Worth” published by History Press. You can contact her at rcook13@earthlink.net