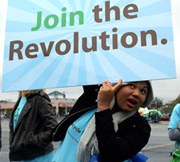 There’s nothing better than a locally owned business that’s not only thinking green, but also helping residents do the same.  In the case of a company called Recycle Revolution, a recycling collection service for businesses, apartments and condominiums, Director Eddie Lott says “We offer comprehensive, “one-stop shop” recycling to everyone in Dallas not currently serviced by the City  and that’s a lot of people.”

The company also operates a Community Drop-Off Center in East Dallas, where residents can bring their electronics and other hard-to-recycle materials too (see http://www.recyclerevolutiondallas.com/what-we-do-and-dont-accept/ for an extensive list of items the company can and can’t accept). 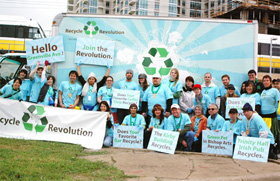 Lott and his mother started the company in early 2008 because, he says, “we believed in the cause, and we believed that others did, too.”
Lott does say that even now three years later the challenge still remains to create recycling programs that are both affordable and profitable.

As a collection service, Recycle Revolution the company started out working with the actual establishment meaning that all of his company’s existing recycling programs for apartments are run through property managers as opposed to individual tenants.

“We’ve just launched a new Voluntary Recycling Program for apartment tenants that allow us to service individual tenants. As a long-time apartment resident myself, I think this is the best possible scenario for tenants” he adds.

Lott says he definitely believes there is a need in this area for the type of services his company provides, but he says “First and foremost, Recycle Revolution is helping to change the way our city both views and manages its waste.   The company is also the most comprehensive recycling collection service in North Texas.”

As for what happens to all those recycled goods once the items are dropped off, Recycle Revolution works with one of various company partners across the Metroplex to recycle items like delivering glass to a processor in Midlothian, electronics to a company in Fort Worth, paper and plastic products to Garland. Each of the specific items then undergoes a different process to create a new and recycled product.  (Photo and Chart Credit Recycle Revolution) 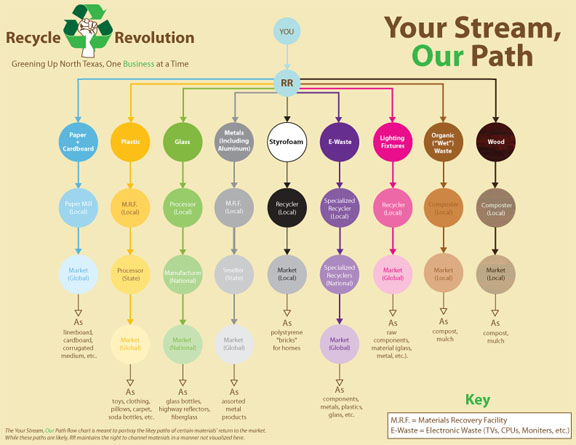 First having the idea to open Recycle Revolution in 2006 Lott says “it was after I came back to Texas from Brazil to finish school.  Throughout Brazil recycling is simply a part of life. I was working in bars on Greenville Avenue and in Exposition Park and realized that literally about 95 percent of what I threw away every day on the job was recyclable from the aluminum cans and glass bottles and mugs people drank out of, to the paperboard boxes that the juice cans came in, to the soft plastic wrapping that covered them.  It just seemed so wrong that we, as an establishment, weren’t recycling those items.”

Fast forward to 2007 when Lott had the chance to develop his recycling idea further as Assistant Campaign Director of Texas Campaign for the Environment, a local non-profit dedicated to educating Texans about the recycling process, specifically, electronic waste.  Then after graduating from UTD, his wife and parents encouraged him to take a chance on Recycle Revolution and he did.

As for the company’s future goals, Lott says moving full steam ahead “we’d like to continue to partner with more small, mid-sized, and large businesses across the Metroplex to make Dallas a more environmentally-friendly city. We believe we can do it, but we have to be creative and we have to be resilient.?"

For questions  and rates, or for further information about RR:contact us at 214.566-3025.   Office and Drop-Off Center at 1703 Chestnut St in Dallas  www.RecycleRevolutionDallas.com

Rita Cook is an award winning journalist who writes or has written for the Dallas Morning News, Focus Daily News, Waxahachie Daily Light, Dreamscapes Travel Magazine, Porthole, Core Media, Fort Worth Star Telegram and many other publications in Los Angeles, Dallas and Chicago.  With five books published, her latest release is “A Brief History of Fort Worth” published by History Press.  You can contact her at rcook13@earthlink.net