Q & A with Fort Worth artist Billy Hassell: Birds, bees and his BRIT exhibit 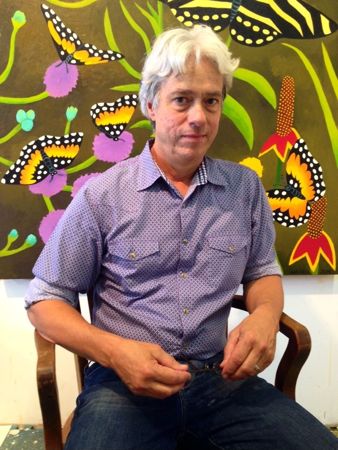 Fort Worth artist and Dallas native Billy Hassell is showing his work in an exhibit title 'Ephemera: Winged Creatures of Texas' at the Botanical Research Institute of Texas through Nov. 13.

Known for his colorful depictions of native flora and fauna, Fort Worth artist Billy Hassell's work fits right in at the Botanical Research Institute of Texas. His show, Ephemera: Winged Creatures of Texas, opened on Friday and features 20 works, including oil paintings, watercolors and color lithographs.

Hassell, who grew up around White Rock Lake, has an affinity for the Texas native birds and insects he paints. We asked the Dallas native a few questions about his current show and his intestest in environmental subjects. 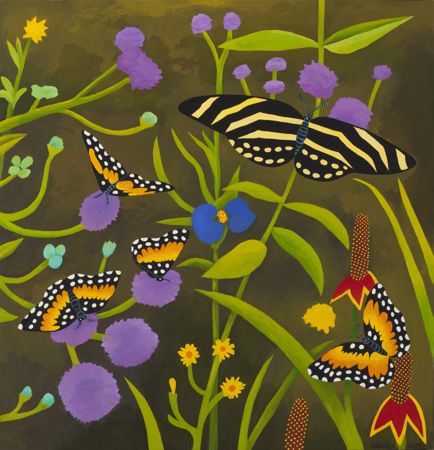 GS: HOW DID YOU COME UP WITH THE TITLE FOR THE SHOW? WHAT DOES ‘EPHEMERA’ REFER TO?

BH: The word ‘ephemera’ means “to last a very short time.” It’s the nature of all living things and their time on earth. My choice to title the show 'Ephemera' was intended to suggest or remind ourselves that the world around us is both precious and momentary. We live in a fleeting moment (in the greater scheme of things) and the things we take for granted – the living things that share our world – are just as fleeting. The second part of the title of the show  “Winged Creatures of Texas” is intended to specify a little further.

GS: WHAT KINDS OF BIRDS WILL BE FEATURED IN THE ARTWORK?

BH: The common kind local to our area – mockingbirds, cardinals – the kind that show up in anyone’s yard and in backyard bird feeders. Even though we think of these birds as common, recent studies have shown that even many songbirds and birds we have always considered more common varieties are showing sharp declines in their population. Besides birds there are other kinds of winged creatures – bees and butterflies – featured in this group of works. Bees and butterflies are important plant pollinators and are vital to the environment. Like many species of birds, many previously common species of butterflies – monarchs for example – are disappearing. And honeybees are in alarming decline in certain areas. What would life be like without honey?

GS: WHAT ARE YOUR FAVORITE PIECES IN THE SHOW? 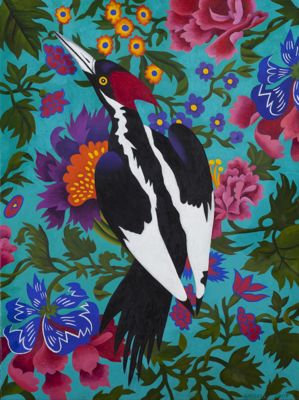 BH:  I have several favorites and feel connected to them for different reasons. One of my favorites, the image that is being used to promote the show and in part inspired the title of the show, is an oil painting titled INTO THE BLUE. The painting features an ivory-billed woodpecker, a bird thought to be extinct but still believed by some to exist in some remote corner of a some southern swamp – a fascinating thing to ponder.

The ivory-billed woodpecker has captured the imagination of many, especially for those with an interest in birds. My image of the woodpecker in this particular painting was appropriated from a sketch by John James Audubon, an early hero of mine – part frontiersman, part naturalist and part artist. The background of the painting is an appropriated floral pattern. I have always been interested in floral patterns as decorative and stylized representations of nature. The painting is a kind of a dichotomy of the artificial and the real – a purposefully, beautifully painted depiction of an amazing bird that has vanished from our world… into the blue. In a way the painting, for me, is a kind of devotional object, a memento mori.

GS: WHERE DID YOU GET YOUR INSPIRATION?

BH: From traveling around Texas and seeing all kinds of different flowering plants in different parts of the state and observing first-hand the birds and butterflies and other insects that are attracted to them. I had a show about a year ago at the Ladybird Johnson Wildflower Center in Austin – an amazing research and educational facility – that brought me more in touch with these connections and relationships. 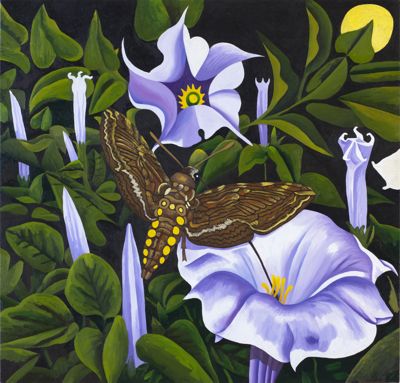 GS: WHAT ARE THESE PAINTINGS ABOUT, BY YOUR ESTIMATION?

BH: These paintings are, at the core, all based on observations of nature but each painting is also a carefully composed tableaux. Some like INTO THE BLUE are more symbolic and others like SPHYNX MOTH AND MOONFLOWERS are more literal but collectively I see them as a celebration of nature and a subtle reminder of how delicate and fragile the balance is.

GS: WHAT HAVE YOU LEARNED ABOUT BIRDS THROUGH YOUR EXPERIENCE OF OBSERVING AND PAINTING THEM?

BH: I think I have come to understand birds better in the context of their natural environments – something no field guide can provide. A lot can be learned about bird behavior through direct observation.

GS: WHAT HAVE YOU LEARNED ABOUT YOURSELF AND YOUR RELATION TO THE NATURAL WORLD?

BH: I see myself more and more as part of a larger community that desperately depends on nature and a healthy environment. Water, of course, comes to mind as we face increasing critical shortages but even the quality of the air we breathe depends on the well being of a balanced plant world. I have learned that each one of us can make a positive impact on the environment in a myriad of small and personal ways.

GS: DO YOU CONSIDER YOURSELF TO BE AN ENVIRONMENTAL ARTIST?

BH: Yes, but as an artist I do not consider that to be my primary mission. My own awareness of environmental issues informs much of the work I produce. Working with and supporting a number of environmental organizations and conservation groups over the years has put me much more in touch with the issues that face us all. I think my work has the potential of making others aware of the environment and may stimulate curiosity and encourage involvement. 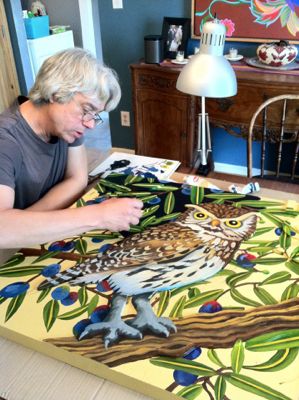 GS: HAVE YOU CHANGED YOUR OPINION ON THAT OVER THE YEARS?

BH: I used to think my work was not pro-active or “political” enough to really consider myself an environmentalist or an “environmental artist” but I have come to believe that anyone can be environmentally involved even on a very personal level. Something as simple as making one’s own backyard “bird friendly” by putting up a bird feeder and a bird bath can have a great positive environmental impact.

GS: HOW HAS YOUR WORK BEEN USED TO PROMOTE THE ENVIRONMENT?

BH: I have produced two versions of a color lithograph of a brown pelican to help raise money for the restoration of the Gulf Coast after the BP oil spill. Percentages of the proceeds from each sale were donated to Audubon Texas for their restoration efforts. I also produced an edition of color lithographs based on the flora and fauna of the Trinity River for Earth Day Dallas (a version of that lithograph will be featured in the show at the BRIT). More recently I produced three small editions (15 in each edition) of giclee prints of three images to financially help support and raise public awareness for the Dorothy Marcille Wood Foundation – a Fort Worth-based conservation foundation devoted to preserving habitat for imperiled species in Texas and in the High Plains. Two of these prints from these editions will be included in the show at the BRIT.