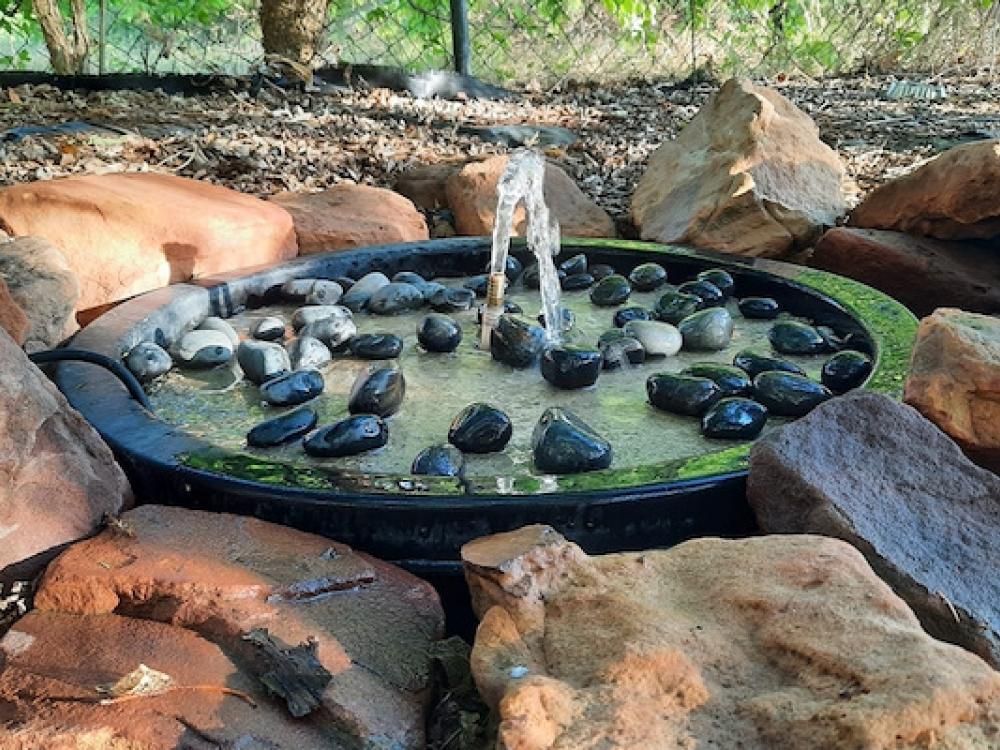 A homemade watering station with fountain is built for critters big and small. Water feature and photo by Marshall Hinsley.

After a month when most days reached 100 degrees or higher and two months with no measurable rainfall in DFW, the summer of 2022 is proving to be dangerously dry, even for our hardy Texas wildlife.

Local wildlife experts say that we’ve reached a point where setting out water for the armadillos, squirrels, skunks, possums, raccoons, rabbits, birds and other wild animals we share our neighborhoods with may be the difference between life and death for the heat-weary creatures.

“This is horrible. It's hot every summer, but it's not this hot for this long,” says Kathy Rogers, founder of Rogers Wildlife Rehabilitation Center in Hutchin, south of Dallas. “Our busiest time is May and June, and then it kind of tails off, but because of this heatwave, it's actually ramped up.”

A possum enjoys a drink in a Fort Worth alley.

A possum enjoys a long drink on a Fort Worth porch on a recent July evening. Courtesy of Julie Thibodeaux.

Rogers says the intense heat wave and drought have kept her busy with an influx of up to 100 dehydrated and malnourished birds being brought in every day all through July and now into August. Once taken in, the birds must be evaluated, rehydrated and given a brief respite from the heat before being made ready for release.

Mela Singleton, president of the North Texas Wildlife Center, which rehabilitates a variety of small wild animals, concurs, saying that lack of water and a dearth of edible vegetation because of the drought have affected wildlife throughout the region.

“What we're seeing is more adults than we would normally see [being brought in for help]. So it's not unusual for us to be getting orphaned babies … [but] we have many more injured and in-poor-health adults coming in than we would usually have,” she says. “Right now, we see a lot of birds – it’s a lot of birds, and then we also have opossums and squirrels — skunks.”

Animals suffering from the heat and drought show many of the same symptoms of a person suffering from heat exhaustion or even heat stroke, such as listlessness, lack of coordination, unslakable thirst and even unconsciousness, all of which can indicate that the animal is in need of urgent care.

“We had a call last week about a nest of baby cottontails that were out of their nest and just stretched out on the ground,” says Desiree Schorn, a licensed wildlife rehabber with Texas Metro Wildlife Rehabilitators in Dallas. “It was just too hot for them in their nest.”

Singleton says that wildlife suffering even mild effects from the heat can become more prone to accident or injury. In turn, mild injuries can quickly become life-threatening as the heat-exhausted animal is less capable of finding food and water. 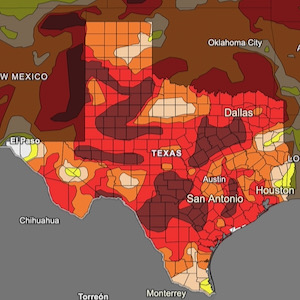 Conditions are unlikely to improve for wildlife anytime soon. Only low chances of scant precipitation are predicted for North Texas by the National Weather Service for the rest of the summer throughout Central and North Texas.

Ellis and Johnson Counties are designated as experiencing exceptional drought – the highest level of drought assessed by the National Integrated Drought Information System. Dallas, Tarrant, Collin and Denton Counties are only faring slightly better with most areas with the designation of extreme drought.

Singleton says that because of the lack of rainfall, many areas that her organization once considered to be suitable for releasing rehabilitated wild animals have now been deemed unsuitable. 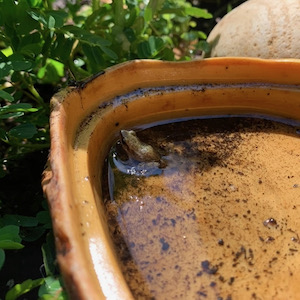 A frog soaks at a makeshift watering hole. Photo by Rebecca Cedillo.

To help wild animals endure the remainder of the summer until rain returns to the region, perhaps in the fall, Singleton, Rogers and Schorn all agree that local residents can place water in shallow dishes out in their yards, apartment terraces, places of business or any other outdoor location under their authority.

“You can either just keep your birdbath full. Or, if you have a patio table or chair, just put a baking dish or something out there – anything at this point,” Rogers says.

Bird baths will suffice for birds and the occasional animal who manages to climb up to the basin. Dishes or water features set on the ground can accommodate all animals whether or not they can climb or fly.

Singleton cautions that water set out for wildlife must be shallow, with the sides of the dish no more than three inches high or else small rabbits, mice and even birds can become trapped in the water and drown. Sticks placed over the edge of the container and into the water, or rocks placed in the dish around the edges give animals something to grab ahold of to work their way out of the water if they do fall in.

Although toads seem to enjoy waiting out the day wading in water, they too can drown in a few hours if they’re unable to escape from a dish with steep sides. 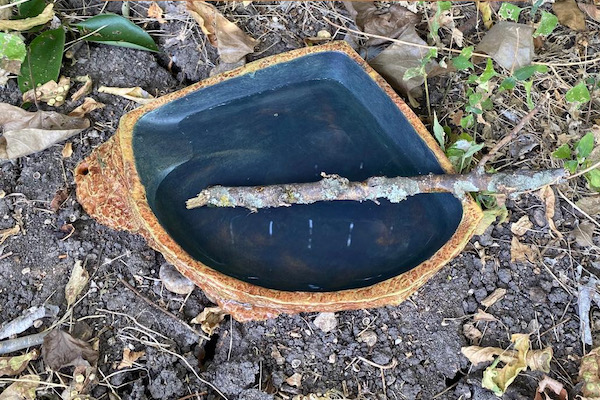 A stick helps keep smaller critters from getting trapped in the bowl. Courtesy of North Texas Wildlife Center.

To prevent drowning, Schorn recommends using the saucers or trays that are used for catching water under a potted plant as a suitable water dish for wildlife. She also says not to forget the very small animals and even insects who could use a drink to sustain themselves.

“If you fill the tray with rocks and fill the water up just to the top of the rocks, butterflies and small animals can drink without the risk of falling into the water,” she says.

Although placing water out for wildlife poses little risk for people, Singleton says some wildlife experts are concerned that attracting wildlife to a small spot can increase the risk of animals communicating diseases to each other. She says, however, that the drought has dried up so many North Texas water sources this year that wild animals are already relying on fewer and smaller water sources. Also, multiplying access to water can actually help mitigate risks to wildlife. 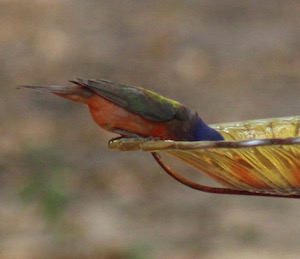 “Whenever you have animals gathering in one location, the risk of communicable diseases goes up,” she says. “However, the more water sources we can get out there, we're actually kind of giving them options. And I also think that it becomes, which risk is greater? And at this point, the risk of these animals dying of dehydration is actually greater than, in my opinion, the risk of disease.”

Rebecca Cedillo, also with North Texas Wildlife Center, adds that changing the water out often will reduce such risks and will prevent mosquitoes from breeding in the water. She also says that if possible, people can place out several sources of water around a yard or large area to create a sort of social distancing for animals.

“Offer multiple sources of water at different levels, so you have low, high and then in the top of a tree, in the middle of whatever. And also change that water out often; so change it in the middle of the day, and then change it for the nocturnal animals too so owls can have fresh water,” she says.

As the social media manager for North Texas Wildlife Center, Cedillo says that she’s seen that many North Texans are concerned about the wildlife they’ve seen suffering in the heat and ask for recommendations on how they can help ease the misery that the animals endure. 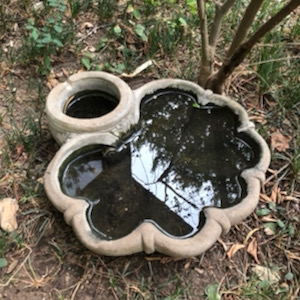 Consider putting water at various levels in your yard to accommodate a variety of wildlife. Photo by Karl Thibodeaux.

After posting a suggestion on how to set out water for wildlife this summer on her organization’s social media, many people responded with eagerness to get started and some have posted their own photos of animals indeed accepting their rehydrating act of kindness

“Everybody wants to help. We've had people comment on our Facebook page, ‘I put a bowl of water out for the rabbits even though they ate my lettuce last year,'” she says. “We've got some awesome pictures that people from around Texas have sent us. We had someone send in a toad, baby frogs, owls, opossums, skunks, armadillos – I mean everything and anything and everything will pop up. It's really amazing to see.”

For anyone who finds an animal that appears to need care, volunteers with the following nonprofits can help evaluate the situation and determine a course of action. The volunteers can also offer advice on how to rescue affected animals and can connect the rescuer with a state-licensed wildlife rehabilitator who can care for the animal.