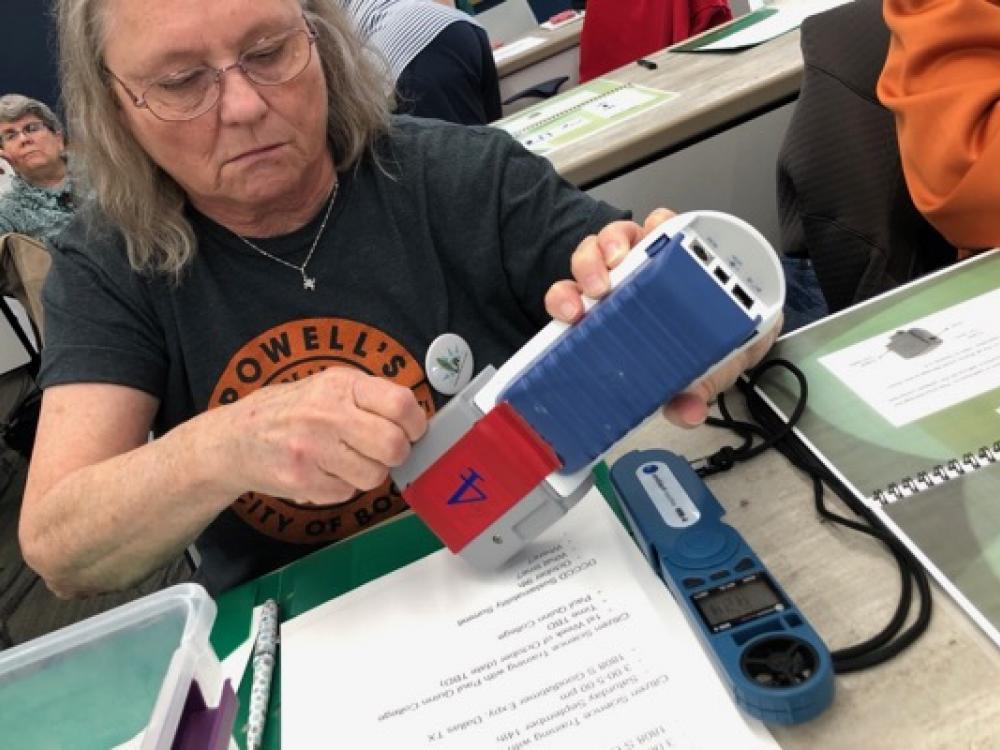 Katheryn Rogers of Liveable Arlington checks out a portable air monitor at a workshop hosted by the group in January. Photos by Julie Thibodeaux.

A 25-year-old clean air advocacy group in North Texas is showing residents how to use portable air monitors. We spoke to Evy Mayo of Downwinders at Risk and Ranjana Bhandari of Liveable Arlington, as well as workshop attendees, about the value of citizens having easy access to air quality data. Report by Julie Thibodeaux.

JULIE THIBODEAUX: What’s in your air? How one North Texas watchdog is training citizens to use technology that can sniff out pollutants in their own back yards in this episode of the Texas Green Report, a production of Green Source DFW and the Memnosyne Institute. I’m Julie Thibodeaux.

Downwinders at Risk is a 25-year-old clean air advocacy group based in Dallas. They have a dream of providing a clearer picture of the state of our air quality.

Like Houston, the Dallas-Fort Worth metropolitan area has been unable to meet federal air quality standards for decades.

According to the American Lung Association, Dallas ranks 18 on the list of America’s most polluted cities for ground level ozone. Houston ranks number 9

Meanwhile, there are only about 20 air monitors across Dallas and Tarrant Counties, which span more than 1,800 square miles and is home to more than 4 million people. The monitors are overseen by the Texas Commission on Environmental Quality, the state agency which coordinates the state’s plan for compliance with federal air quality standards. TCEQ has yet to respond to our request for comment.

Clean air advocates say there’s just not enough monitors. Air quality can differ from block to block depending on wind direction, pollution sources as well as mitigating factors like trees. Critics say the current monitoring system only provides a broad overview of air quality and does little to pinpoint polluting sources and pollution hot spots. For many residents, the nearest air monitor is located miles away.

That’s why Downwinders is training an army of citizen scientists how to use portable air monitors. They believe that showing decision-makers the results could spur them to do more about air pollution.

Evy Mayo is the chair of Downwinders at Risk.

She said they started hosting free air monitoring workshops in 2018 and host them monthly across DFW. 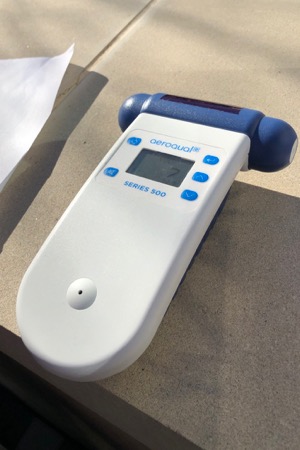 During the workshop, a monitor showed a lower VOC reading outside than inside the new building, perhaps due to off-gassing.

EVY MAYO: “They're designed for citizens who are concerned about the air that they're breathing and want to bring some data to their fight whatever that might be. It might be in front of council or in their neighborhood. It’s to provide technical assistance to any citizen that's concerned.”

JULIE THIBODEAUX: She said participants must take two classes before they can check out the monitors, which cost the nonprofit around $1,500 each.

EVY MAYO: “In the first one, they learn the basics of what particulate matter pollution is. So what are some of the sources. You know, what are some of the health impacts that the pollution can have. And then a kind of practical piece with the monitor where they got to understand how to work it, basically, and how to take notes in the field and, you know, fully be independent in the field collecting research data.

“The second class is basically we go out into the field with the group and they kind of do what they would do if we weren't there, except that we are there. Just to help troubleshoot any questions they have.”

JULIE THIBODEAUX: The monitors can be customized to detect a variety of substances. Downwinders has focused primarily on detecting particulate matter, also known as PM, which is related to many serious health problems, including aggrevated asthma, heart attacks and premature death from heart and lung disease. It blows in road dust, off construction sites, out of smokestacks and tailpipes.

So what can people do with the information they collect on the air monitors?

EVY MAYO: “I think it depends. Some just want to have it for their own knowledge. So they'll just, you know, take it and be, you know, have some more context to what they think they're experiencing. Others are using it in their own campaigns like Midlothian Breath is an initiative down in Midlothian. And we just did a training over there and they're going to try to use the information I think for their campaign work. So it really depends.”

JULIE THIBODEAUX: The group is currently developing a database that residents, activists and city planners can access to see air quality readings they’ve collected from citizen scientists as well as 30 stationary monitors they plan to install around Dallas in high industrial areas.

Ranjana Bhandari is the founder of Liveable Arlington, a grassroots, anti-fracking group that co-hosted one of Downwinders’ air monitoring workshops recently in Arlington, a suburb between Dallas and Fort Worth. Her group has been lobbying for stricter regulations for the 350 active gas wells in Arlington. She said during the workshop, she found the monitors user-friendly and believes they could help her group make their case. 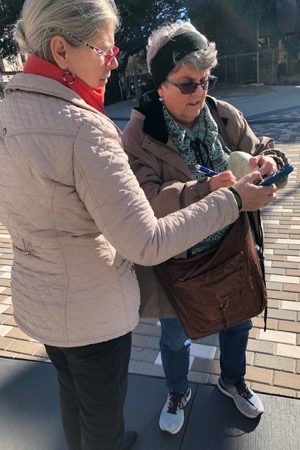 Workshop attendees take a reading outside the downtown Arlington library.

RANJANA BHANDARI: “Sometimes we get reports of emissions or smells. And it's typical in such a case for us to say call the TCEQ. And by the time the TCEQ comes, things disperse, or more things happen. So having access to a monitor like this would, hopefully, you know, give us an opportunity to go take a basic reading of something like volatile organics. Because they use two types of monitors in this workshop, one measured particulate matter. The other one measured volatile organic compounds. So I can see the second one particularly being helpful to us here.”

“Right after the workshop, one of the participants went shopping. And at a drugstore, which is very close to a drill site - actually is next to a drill site. She called me and she said that she had this overwhelming smell of benzene when she was there. So I think in a situation like this, it would be good to have some monitoring capacity that we could, you know, let the community have access to, which is how I think this air monitoring program works.” 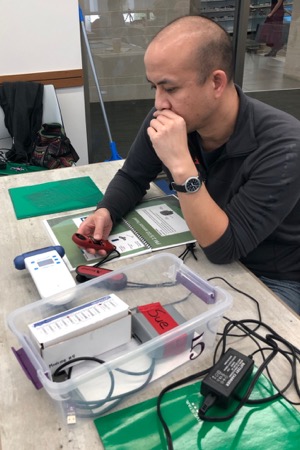 Kris Yowtak of Irving learns how to determine weather conditions at a workshop hosted by Liveable Arlington in January.

JULIE THIBODEAUX: One of the participants of the Arlington workshop was Kris Yowtak, an Irving-based graduate engineering student.

KRIS YOWTAK: ”So I'm currently working on my master's degree in energy systems engineering. And so one of the prime motivators for me to pursue that was to get into a field where I could do something about global warming and climate change or however you want to call it.”

JULIE THIBODEAUX: He said he came to the workshop to better inform himself and sees the air monitors as potentially powerful tool.

KRIS YOWTAK: “So I think it's a great initiative that will hopefully better inform our governments our local governments, our citizens who choose to get involved. I just think having more data is better than having no data at all.”

JULIE THIBODEAUX: Another participant was Katheryn Rogers, an Arlington-based grandmother and activist with Liveable Arlington.

KATHERYN ROGERS: “I feel like the more that we can learn, and the more things we have in our toolbox, the better that we can argue our points or get people to listen basically.”