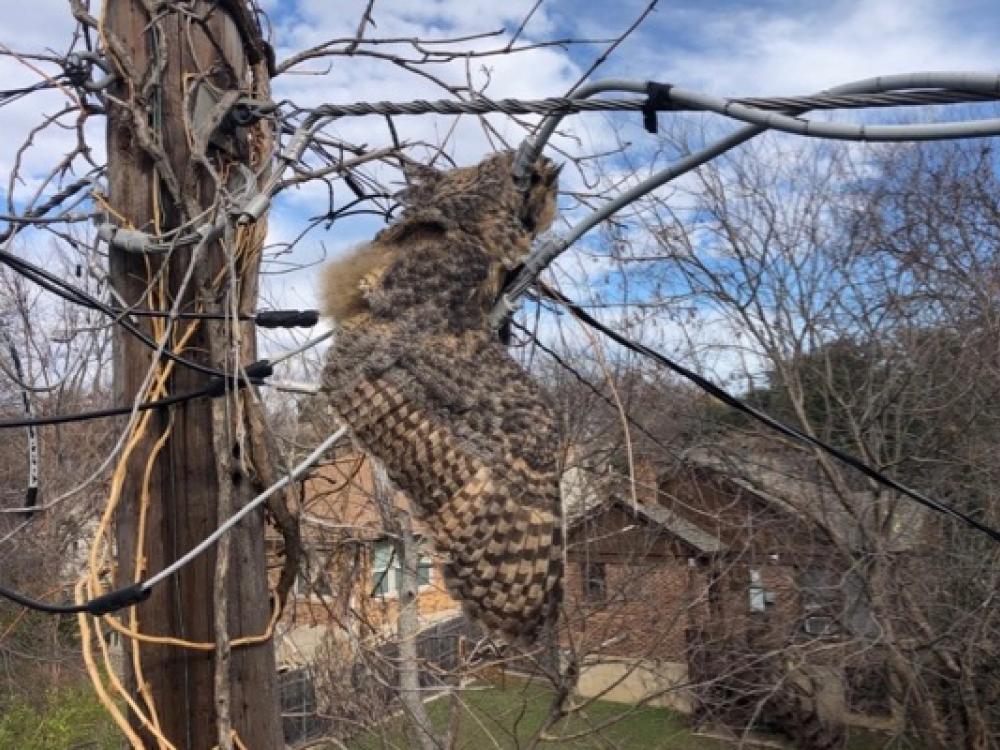 A great horned owl met an untimely end in our Fort Worth neighborhood last month.

My husband and I discovered him one Sunday morning. We kept hearing crows yelling in a nearby tree. Like bluejays, crows will join forces to scare predators away. 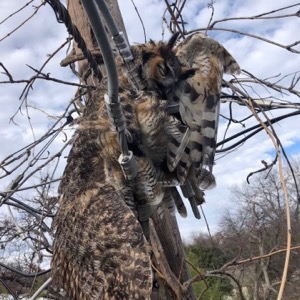 The owl appeared to be entangled in wire. Photo courtesy of Oncor.

I looked out from our deck. More crows kept flying in to join the protest. Finally we decided to see for ourselves what the squawking was about. We left our yard for the alley that runs behind our house. Rarely used by people, the alley has been reclaimed by nature. Once the domain of city garbage trucks, now it provides a wildlife corridor for raccoons, possums, squirrels and other critters.

In addition, our historic neighborhood - just blocks from busy streets and cultural attractions in Fort Worth - is home to more than a dozen species of songbirds and hawks. We’ve even seen three types of owls, including a pair of great horned owls.

The first time we discovered the great horned owl was in winter. One night, we heard two owls calling to each other. 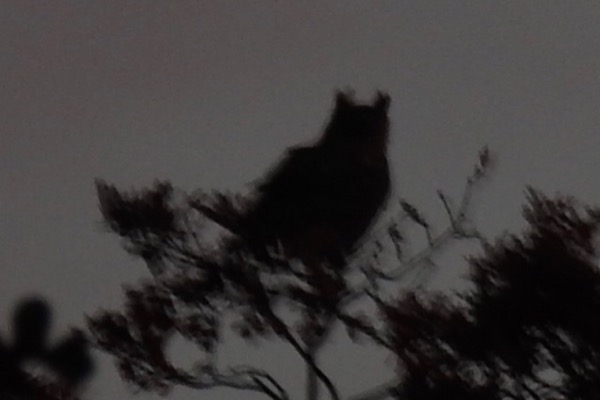 The silhouette of a great horned owl, also known as the tiger owl and the hoot owl, spotted in Fort Worth, November 2018. Photo by Sam Kieschnick.

We rushed out with binoculars and tracked them to a couple of houses away. We trained our lenses high in the branches of a dead tree in a neighbor’s back yard. Standing in the street in the dark, we hoped no one would catch us staring into backyards with binoculars.

With the branches bare, we could see the silhouettes of two great horned owls with their tufted ears, singing a duet.

Sam Kieschnick, DFW-based wildlife biologist for Texas Parks and Wildlife, said people may be more likely to notice owls in winter due to loss of leaves on the trees. Plus the owls may be hunting a little earlier at dusk.

"I’d call great horned owls somewhat common in North Texas, although not always seen," said Kieschnick. "It's not super rare, but nonetheless, a great experience to see one."

Over the next several years, every winter, we have heard a great horned owl in that same spot.

I didn’t hear the owl this year.

I heard the crows.

When we followed their cries down the alley to where we used to see the owl, we saw them circling above the power line.

And there, hanging like a scarecrow, was our friend the owl.

The sight was shocking.

He hung on the power lines as if crucified, with wings spread out as if in mid-flight. He was still lifelike enough to draw flak from the circling crows. 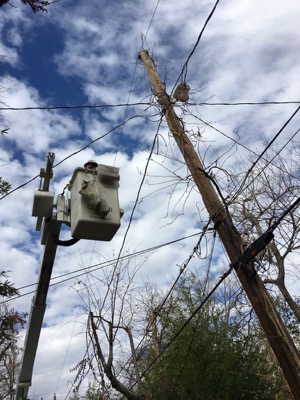 Oncor technician approaches the top of a pole where a great horned owl was entangled. Photo by Julie Thibodeaux.

At daybreak, we contacted U.S. Fish and Wildlife Service. Great horned owls are protected by the Migratory Bird Treaty Act. USFWS contacted Oncor to retrieve the owl's body. The next day, one of Oncor’s wildlife specialists, Josh Vaughn, came out to survey the scene.

Vaughn and I walked the alley to where the owl hung caught in the power line’s web.

Vaughn observed what was once the owl’s domain and remarked that the perch provided a clear view of the corridor below, where critters like rodents likely scurried. He also surmized that the owl we heard every winter was likely the same owl, given their uncommon sightings in the suburbs. 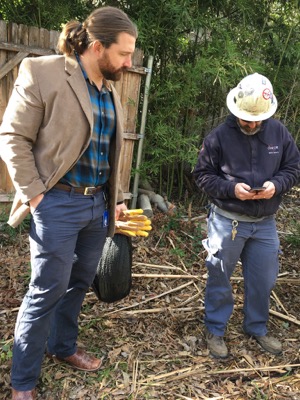 Oncor wildlife specialist Josh Vaughn and an Oncor technician examine photos of the owl taken from atop the pole. Photo by Julie Thibodeaux.

An Oncor technician met us at the pole with a truck and ladder. The Oncor lineman rode the cherry picker up to the top of pole.

Wearing protective gloves, he carefully untangled and lifted the owl from the lines. He brought it down in a bag.

I asked to see the body.

The technician opened the bag and pointed out black burn marks on the owl’s feet - a telltale sign of electrocution.

It was a sad sight.

Yet it was amazing to see up close for the first time the face and the feathers of this majestic and mysterious creature we’d only glimpsed in the dark.

The next day, Ray Averitt, Environmental Manager at Oncor, came out and inspected the lines himself.

His department fields calls related to the environment. He oversees everything from ecological impact studies to Oncor’s extensive equipment recycling program.

Averitt said they rarely get calls regarding wildlife electrocutions.

“It’s possible it occurs - but we’re not aware of it.”

According to the U.S. Fish and Wildlife Service, it’s very difficult to determine how many birds die by electrocution. The agency estimates that between 8 million and 57 million birds are killed in the United States annually from collisions with electric utility lines.

Species such as herons, egrets, raptors, and storks have a higher risk from collisions with power lines than other ground roosting and nesting birds because of their size and penchant for roosting in elevated areas such as trees and poles.

“Electric lines are obstructions typically placed within the range of average bird flight level and are difficult for birds to see,” says the USFW online. “Birds can be injured or killed with they collide with electric lines in mid-flight. Electric lines are a particular risk in locations frequently traveled by birds and in areas where poor weather or darkness could further decrease visibility”

Averitt said when they do learn of a wildlife power line incident, they do their best to mitigate the dangers.

“We try to do what we can [to prevent any harm to wildlife],” said Averitt. “I couldn’t sleep at night, if we didn’t.”

Watch a video about the eagle's nest relocation to John Bunker Sands Wetland Center with help from Oncor and U.S. Fish and Wildlife.

Eagles reuse the same nests year after year, with the largest nest on record over 9 feet in diameter.

In 2014, after an eagle's nest was discovered on a transmission tower near John Bunker Sand’s Wetland Center in Seagoville, the Center's director wanting to head off any "fowl" consequences, partnered with Oncor and USFWS to relocate the nest to the nearby refuge. In preparation, Oncor contractors moved an identical tower to the Wetland Center set aside just for the eagles that was not tied into the power grid. After the nest was empty for the season, the crew carefully lifted the eagle’s as well as a part of the tower it was attached to and relocated it to the Wetland Center's decoy tower.

The team was thrilled when the eagles returned the next spring.

“At first the male went to the old site and kept looking around,” said Averitt, with a chuckle. “But they eventually figured it out.”

Back in our alley, Averitt scrutinized the poles but could not see anything out of the ordinary to have caused our owl to be electrocuted. I pointed to the thick vines growing up the pole but he said plant matter is typically a poor conductor. 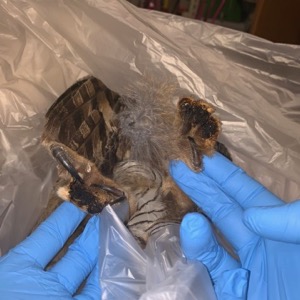 The owl's feet had burned marks and talons missing, an indicator of electrocution. Courtesy of U.S. Fish and Wildlife.

Meanwhile, Vaughn had delivered the owl’s carcass to U.S. Fish and Wildlife officers. They confirmed that electrocution was the likely cause of the bird’s death. Both feet were charred black and several talons were missing.

A week later, Vaughn returned to the alley with technicians who cleared the heavy vine growing around the pole where the owl died. They installed some additional insulation on the wires surrounding three poles as well on the transformers. 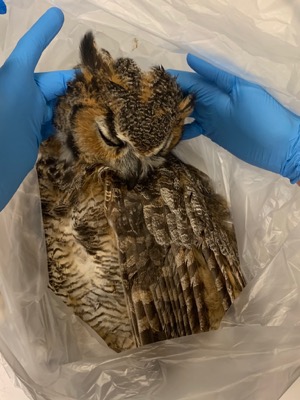 A rare upclose glimpse of the elusive owl. Courtesy of U.S. Fish and Wildlife.

As for the owl, its feathers will be harvested by the National Eagle Repository and used by various tribes for Native American cultural and religious ceremonies, according to Erik Orsak of U.S. Fish and Wildlife.

That made me feel better knowing our owl’s life was being honored.

“We appreciate you and other members of the public keeping an eye on things out there,” said Orsak, in an email. “We count on people like you to help keep us informed.”

It was reassuring to know that a system was in place to look into human-caused bird deaths.

Still we mourn the loss of our feathered friend. Will we ever hear such a fine nightime soloist in our alley again?