The John Bunker Sands Wetland Center sits like a jewel on the East Fork of the Trinity. Abundant with fish and wildlife, it’s fine hunting ground for large birds of prey, including a pair of bald eagles, who built a nest in one of the gigantic electric towers that march across the preserve.

On a sunny and warm late winter day, I met Chris Jackson, whose photos of the breeding pair have gone viral. 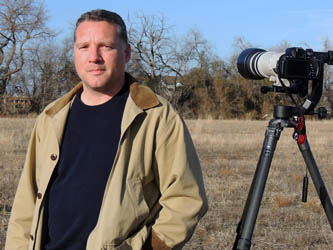 The 46-year-old Carrollton resident is coauthor of In Your Backyard: Discovering Urban Wildlife and operates DFWUrbanWildlife.com. He agreed to guide me through the maze of shallow ponds to the optimum spot for viewing the eagles.

From 400 yards away, it’s hard to comprehend the large size of the nest, which when completed is typically six feet in diameter and three feet tall.

Above, Chris Jackson operates DFWUrbanWildlife.com. Below, a bald eagle builds a nest in an electric tower at John Bunker Sands Wetland Area. All photos courtesy of Chris Jackson. 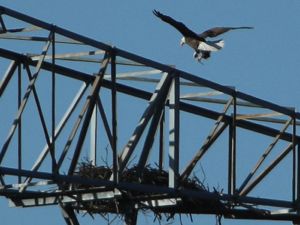 Jackson chronicled through the winter as the pair mated and built on to the nest. When the eagles are incubating eggs, you may see a white head and hooked beak poking out. Once the eggs hatch, sometime in the next few weeks, the eagles will become more visible as they make multiple hunting trips to feed the fast-growing chicks.

Jackson called DFWUrbanWildlife.com “a work in progress.” It started in 2005 as a website field guide coded by Jackson, a software engineer. When Jackson switched to a Wordpress platform in the summer of 2011, he said, things just took off. 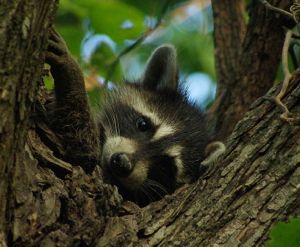 Right, a raccoon poses for a portrait.

“Now instead of only being able to update the site once every couple of months, I could make posts multiple times a day if I wanted to.”

And did. The new system also made it easier for other photographers to participate.

Jackson has enjoyed a lifelong fascination with wildlife and the natural world. 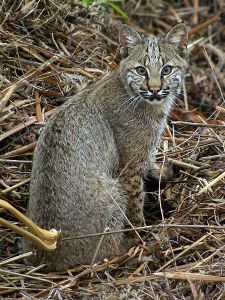 “I’ve long been interested in pursuing wildlife photography as a hobby myself, but never followed through because I figured chances for photographing wildlife were limited here in the city,” said Jackson. “Yet despite the suburban sprawl, I found that many wild animals not only manage to survive in the presence of people, but actually thrive. “

Now that his two children are becoming young adults — with daughter Nisha already a young naturalist — Jackson’s able to spend more time in the parks and preserves in North Texas whose ecosystems are able to sustain wildlife.

It’s not just the capturing of beautiful images that motivates Jackson to put in about 15 hours a week photographing wildlife, answering emails and uploading images, the reward is learning more about denizens of the nature through observation.

“Getting to see wildlife engaging in candid behavior is a real privilege,” said Jackson. “And patience is the price of admittance.”

Above, a bobcat zooms in on photographer. Below, an armadillo rustles around Lewisville Lake.

For example, while at the Lewisville Lake Environmental Learning Area, he encountered a dozen or so turkey vultures on the dam preening their feathers, plus an armadillo rooting around in the short grass. The armadillo would get too close and the vultures would chase it off, and vice versa.

“I watched these antics for about a half hour,” said Jackson. “The last thing I saw was the armadillo getting so frustrated at being harassed that he just rushed headlong through the entire group of vultures. He was so aggressive that all of the birds took to the air. Yet when I returned later I found the same group of vultures keeping company with the same armadillo in a different location on the dam. Very weird.” 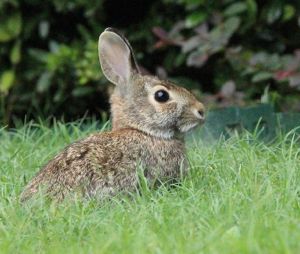 Jackson and other naturalists contribute plentiful pictures of mammals such as bobcats, coyotes, deer, wild hogs and even feral donkeys to DFWUrbanWildlife.com. But even field creatures like rabbits and woodland denizens such as raccoons get their turn.

Left, an eastern cottontail foraging in a front yard in Carrollton.

There are also photographs of more than 150 types of birds, including North Texas rarities like crested caracara, osprey and wild turkey. He plans to expand his focus to reptiles, amphibians, fish and even insects, spiders and other invertebrates. 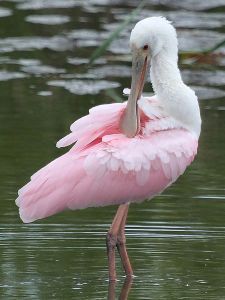 Jackson’s patience and observant eye has rewarded him with some unusual sightings, including a few wood storks and roseate spoonbills.

"Last summer, the Dallas area was visited by seven whooping cranes, which are very rare birds with just over 400 individuals left in the wild. Also last summer, I had my first look at a swallow-tailed kite, which is only an occasional visitor this far north. And, of course, the nesting bald eagles in Seagoville. That is a sight I never thought I would ever see when I started my website!”

Judging by his website’s bird wishlist, there are a few more he’d like to see.

As for mammals, Jackson said, the river otter is the most exotic animal he’s seen but added it may be more common than he first surmised. 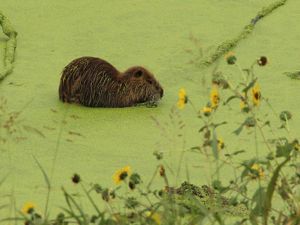 Other river critters he’s taken pictures of include nutria and beaver. He’s got a wish list for mammals, too.

“The ringtail, mountain lion, and American alligator top my list,” said Jackson. “I am always interested in hearing from folks who might have a useful tip about where to see these kinds of animals!”

North Texas Wild is an ongoing series by Amy Martin. Look for wildlife photography tips in next month's column.