When a meandering prairie river runs through your city, should you straighten its curves into a glorified drainage ditch, force a for-profit whitewater park in one of its few natural places (and fail at it), allow businesses to decimate its forests, and have your park department generally ignore it?

Or, should you foster wetlands and prairies, line its banks with parks replete with multi-use trails, set up free paddling trails and treasure its green treasures so much that your park department slogan is “Naturally fun.”

Such is the difference between how Dallas treats the Trinity River and what Arlington has done with River Legacy Parks, a 1,300-acre public complex located in the tony Green Oaks area of northwest Arlington. The parks have something for everyone, from people in business clothes seeking a lunchtime stroll, to nature nerds who thrill to native plants and birdwatching.

River Legacy's four-phase master plan calls for much of the park to be preserved for passive activities "fostering an appreciation of the area's plant and animal life." It envisions River Legacy Parks as “Arlington's segment of a visionary 75-mile greenbelt parkland from west Fort Worth through east Dallas.”

My husband Scooter and I started our exploration of River Legacy Parks on a bright and beautiful early fall day at the complex’s heart, the River Legacy Living Science Center, 703 NW Green Oaks Boulevard, located at the intersection of North Cooper Street. Built with sustainability and energy conservation in mind, the modern 12,000-square-foot building melds with the woods. 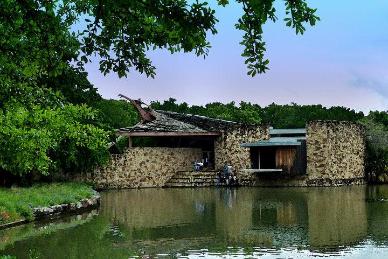 The center is filled with interactive exhibits, aquariums and terrariums for inspiring children to learn about nature. It focuses on the riparian habitat along rivers like the Trinity. We especially enjoyed the light-up map outlining the rivers of Texas. The center even has an edu-tainment area for toddlers and nature classes for preschoolers, demographics few nature centers reach out to.

Nestled next to Snider Creek, a feeder of the Trinity, the shaded grounds and pond are artfully landscaped with native plants such as Turk's cap, coralberry, inland seaoats and beautyberry shrubs. We enjoyed a short creekside amble. The purple beautyberries and golden-headed seaoats and wild rye were outstanding. An extensive composting demonstration area showcased many styles of composting in various stages of decay. 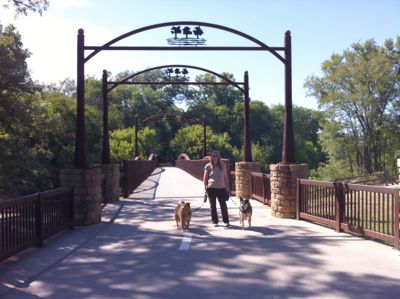 Amy, Mabel and Dotty are ready to hike. Photo by Scooter Smith.

Our two dogs, Dotty and Mabel, were eager to explore the eight miles of trails (on leash, of course) that follow the Trinity’s winding curves through bottomland forest, wetlands and prairie. We drove a block over to the western end of the trails at River Legacy Parks’s main entrance at 701 NW Green Oaks Boulevard. Its mixed use with a nature emphasis evokes Austin’s famed Zilker Park.

In the west section, athletic types will enjoy the exercise stations and turf field for casual team sports like pick-up soccer or touch football. For mountain bike enthusiasts, there are more than 10 miles of cross-country trails that get raves on the Dallas Off-Road Bicycling Association (DORBA) website.

The park’s Elm Grove Pavilion hosts events and rents out for gatherings. Covered and open picnic tables are plentiful. An extensive forest-inspired playground unveiled in 2012 was created especially for River Legacy and melds with the natural landscape. It’s divided into two areas: ages 2 to 5 — which features a large Tyrannosaurus rex dinosaur skeleton sculpture to climb on — and ages 5 to 12 with more challenging attractions. 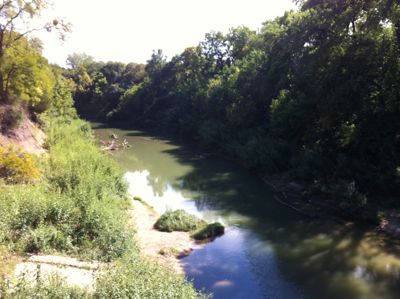 A view of the Trinity River. Photo by Scooter Smith.

We headed down the main trail that follows the Trinity River through a forest of bur oak and cedar elms. Glimpses of the river were seen through walls of eight-foot-tall invasive privet and ligustrum shrubs. River overlooks were seldom, but got more frequent toward the western end. It’s a great trail for brisk walking and running, but do be aware of the zippy bicyclists, even though pedestrians have the priority. The trails can get very busy on weekends and after work on weekdays. Here’s the park trails map.

The river trail is not a naturalists’ experience. The amount of non-natives in the park is striking, especially compared to the science center area. But it’s very enjoyable for getting fresh air and enjoying green space without getting nature on you. The concrete trails are wide and even, with the greenery trimmed well back. We saw several folks taking lunch breaks from work in dress shoes. Even so the emphasis is on nature. Trail signs urge visitors to respect the park’s wildlife and give them plenty of space. 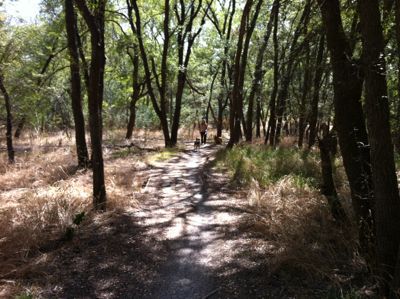 For a closer to nature experience, explore the park’s DORBA off-road bike trails. Unlike the paved trails, here the bicyclists have the right of way, so be very aware. More than 10 miles of trails trace an intricate miasma through the woods. Check out this crazy map.

DORBA trails are so winding and circuitous, it's easy to get lost and so much fun. But it’s a small area and you can quickly find your way out.

The challenging terrain of small steep hills, ravines and narrow ridges so beloved by off-roaders makes for vigorous hiking. Some wooded areas where DORBA controlled the invasives are positively beautiful. The open prairie DORBA loop is a gorgeous change of scenery.

A recommended one to two hour excursion would be to take the river trail all the way to the final overlook and then return via the DORBA trails. Use the furthest parking lots down the west park road for best access to the trailheads. Or park at the River Legacy Living Science Center and take the trails over. Take a picture of the excellent trail map displays on your phone and head out. 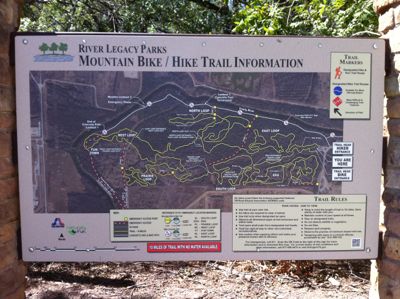 The paved hike/bike river trail crosses to the north side of the river over a spectacular steel bridge to River Legacy East on the other side of Collins Street. It then goes east for miles through a greenbelt along the Trinity that’s less wooded and affords more river views. One heckuva hike. See the trail map.

River Legacy East is best known for the Elzie Odom Recreation Center, 1651 NE Green Oaks Boulevard, with three multi-purpose rooms, two gymnasiums, a fitness room, rock climbing wall and sports arena. The paved hiking trail in the surrounding park is only a half-mile, but the picnic areas come with grills and the sand volleyball courts look to be very fun.

We drove over to the River Legacy section at 3020 North Collins St., much quieter than River Legacy’s western section or River Legacy East. We took the short park drive to the end and walked a paved trail to the wetland overlook area. It features an impressive semi-circular stone display that explains how wetlands filter pollutants from water and describes the plants and creatures living there.

Very visible from this open area is a capped landfill that towers like a rounded mountain over the river bottom. Most of the time, trees screen the parks from the refuse and water purification operations they are adjacent to.

Though the wetland is currently looking dry, it would still make a lovely area for morning and evening bird watching. Dirt trails lead off the main paved one for up close exploration. A wetlands garden near the parking lot remains watered and lush. 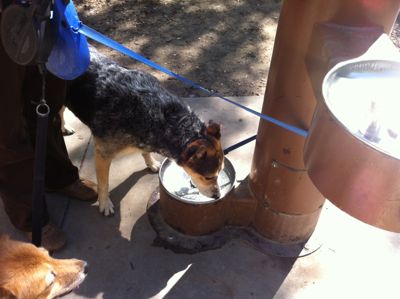 The girls take a water break. Photo by Scooter Smith.​

We drove halfway back up the park road and took a paved trail that leads to the riverside trail. One direction goes beneath Collins and on to Lake Viridian, a fancy manicured body of water flanked by mini mansions. Sadly sterile, but it might have a little waterfowl in the winter.

The other direction was more promising. A dog watering station was a big hit and a trio of historical markers imparted a deeper understanding of the area. We continued on to the steel bridge where a small side dirt trail leads down to the riverbank to a canoe launch area. The dogs launched themselves as well.

Similar to Connemara Conservancy, River Legacy is framed by development on all sides, but an admirable job of maintaining its wildness and keeping irresponsible park users in line. Much of that is due to the River Legacy Foundation, a non-profit 501(c)(3) public/private partnership with the city of Arlington. River Legacy opened as a public park in 1990 with just 376 acres, but the foundation helped the park grow into a 1,300-acre oasis.

Besides, what’s not to like about a park enterprise that hosts events like the super popular Cardboard Boat Regatta in the spring? Coming up is one of their biggest events, After Dark in the Park, on Oct. 10 to 12, and the naturalists’ party A Night with Nature on Nov. 14.