A protester carries an environmental message at the Women's March Jan. 21 in Colorado Springs, CO.

Thousands of North Texans marched Jan. 21 a day after the Inaugeration in solidarity with the Women’s March on Washington. The worldwide event drew nearly 700 sister marches and more than 4 million participants, according to high estimates. 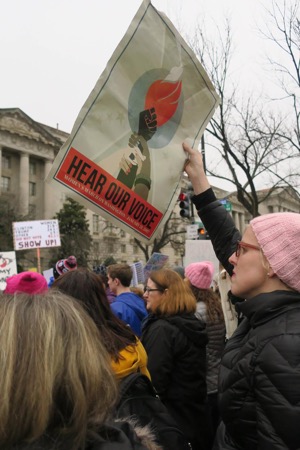 As many as 5,000-8000 marched in Dallas. The same number came out in Fort Worth while a smaller march was held in Denton. In addition, many traveled to Austin, where 50,000 gathered, and some North Texans traveled all the way to D.C.

Among the issues of concern listed on the Women’s March website was environmental justice. The North Texas greenies that we contacted cited a clear connection between the march and environmental causes they supported.

Dallas ecopreneur Amy King at the Women's March in Washington D.C. on Jan. 21.

Among them was Jillian Jordan, founder of the Great Seed Bomb, who participated in the Denton demonstration. We also heard from Becky Bornhorst, Downwinders at Risk board member for more than 20 years, and Andrea Ridout, former Mother Earth Radio News host and founder of Gecko Hardware, who were at the Dallas march. Don and Debora Young, founders of Friends of Tandy Hills Natural Area, marched in Fort Worth. Meanwhile, Amy King, Dallas-based CEO of Nested Strategies and co-founder of GoodWork, a green coworking community set to open this year, traveled to D.C.

We asked them how the march fit into their environmental activism.

WAS YOUR REASON FOR MARCHING TIED TO YOUR  CONCERNS ABOUT THE PLANET?

Jillian Jordan: Yes, very much so. I saw a lot of signs asking for us to protect the work that's already been done on the climate front. Delaying the inevitable changes needed (renewable energy, conservation) would be disastrous.

Andrea Ridout: Yes, I have grave fears that the next 4 years will do tremendous damage to the environmental progress that we have made over the last few decades. We have already been walking on shaky ground and Trump's initiatives will potentially throw us into major environmental peril.

Amy King: Yes the environment is one of my top issues. I am concerned by the anti-regulation agenda of the new administration and feel that I must carry the torch of Rachel Carson to avoid a reversal of 50 years of progress in the right direction. I wish that we could leave environmental regulation to the discretion of states, but history shows that doesn’t go very well. Unfortunately people and corporations don’t always do the right thing unless the EPA makes them do it.

Becky Bornhorst: Yes. I have been a board member of Downwinders at Risk for 20 years and we have worked diligently to improve air quality. President Trump could roll back all the work we've done within a matter of weeks. 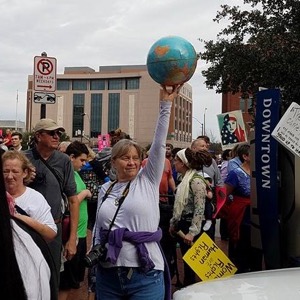 Don Young: Absolutely. It was gratifying to be part of one of the largest protest marches ever held in our ultra-conservative city.

A demonstrater holds up a globe at the Women's March in Fort Worth. Courtesy of Cori Hackworth.

DO YOU SEE THE WOMEN'S MARCH CONNECTED TO THE ENVIRONMENTAL JUSTICE MOVEMENT? IF SO, IN WHAT WAY?

JJ: Yes, I saw the Women's March mainly as a march of "empowered women empowering women" and the marginalized. That also means protecting our children and human health when it comes to environmental degradation. The connection to protect life and future generations isn't solely female, but I do think it's the duty of women to speak up for others and the voiceless.

AR: As evidenced by the signage carried by many at the rallies, a tremendous amount of people, women and men, are concerned that the new administration will not honor the commitment that the U.S. has made to environmental issues. We are seeing evidence of that already as Trump has frozen all EPA grants and contracts and it is feared that much more negative impact is to come. Trump does not even believe in climate change so how can we expect him to respect this planet?

AK: Absolutely - Earth is our home and a large percentage of women see how we need to sustain our environment to ensure that future generations can survive and thrive! And environmental deregulation is one big area where the new Presidential administration will hurt women and children in a tangible way.

BB: Yes. The environment is already under attack from the new administration. Women will unite to defend our right to breathe clean air and drink clean water. 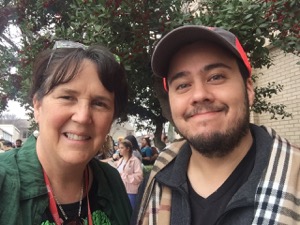 DY: Not enough but, in spirit. Women’s rights and the environment are intimately connected, as are all living beings.

Andrea Ridout and son Sully at the Women's March in Dallas.

IN LIGHT OF THE HISTORIC TURNOUT OF THE MARCH, DO YOU FORESEE THE ENVIRONMENTAL MOVEMENT ALSO GAINING MOMENTUM OVER THE NEXT FOUR YEARS?

JJ: Yes. I encourage people to divest in fossil fuels and advocate for clean energy, for starters. My personal nest egg saw a 14 percent return this year since divesting from fossil fuels a few years ago. If we want our economy to be strong, we have to dedicate resources to advancing cleantech. I even dedicate a percentage of my investments to startups with female founders and companies with female CEOs as they've shown to perform better and I get the feeling they're frequently environmentalists with the urge to play the long game to protect future generations. We need a more compassionate business world and profit above all else will sink the U.S.

AR: It is my hope that Trump's attitudes and behavior will awaken a sleeping giant in the environmental movement. The massive turnout at the women's marches all around the country is evidence of that movement. As we raise our voices in unison, perhaps we can pressure the administration to hold the line on certain key issues so that the damage is kept to a minimum. 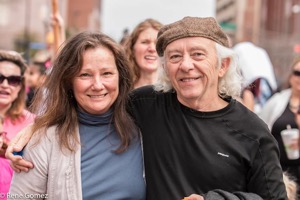 AK: I believe that many of the women who marched around the world are concerned about climate change and human health, and how they affect our future as humans. I could feel in my gut as I marched in DC that a fire was lit in many women who had never marched or spoken up in the past. So I’m sure that many women will focus on environmental activism as part of their new commitment to use their voice.

Debora and Don Young, founders of Friends of Tandy Hills Natural Area, at the Women's March in Fort Worth. Photo by Rene Gomez.

BB: Yes. As the climate continues to change in devastating ways, more families will be impacted. It will become harder and harder for politicians to support industry at the expense of the citizens. Downwinders is ready for the challenge. Let's keep the momentum going.

DY: Yes. I expect there will be momentum unlike never before.