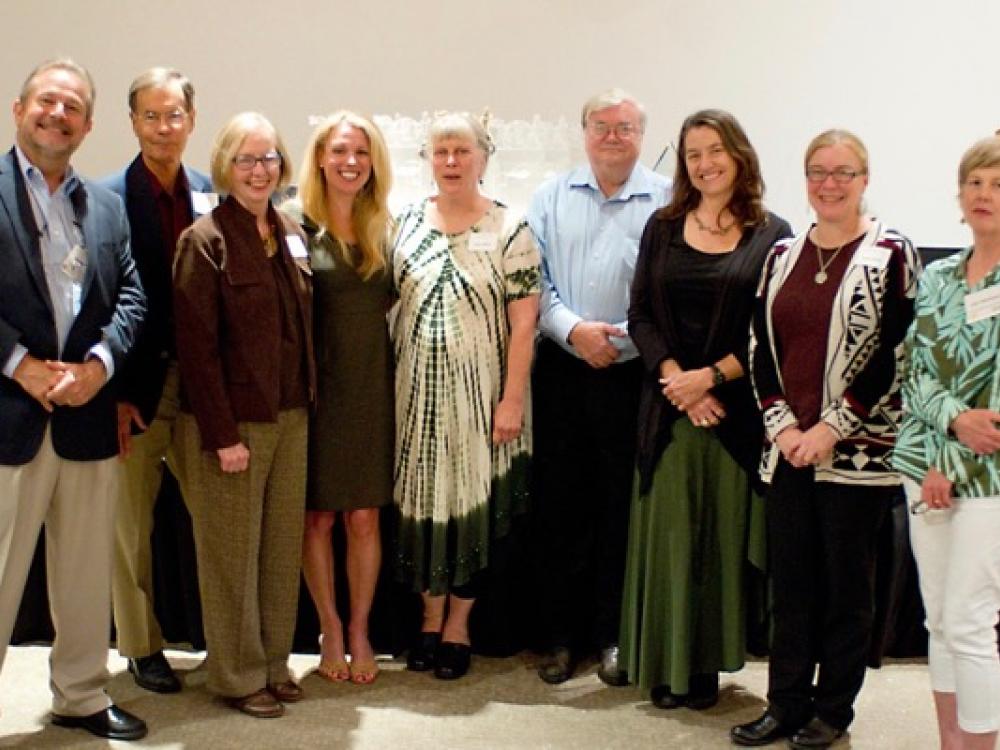 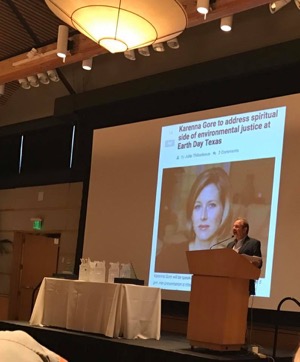 Green Source DFW was created by the Memnosyne Institute in 2011 with the mission of advancing the environmental movement and green living in North Texas.

The main focus of Green Source DFW is GreenSourceDFW.org, a online publication that features original reporting on environmental issues and green trends in North Texas. In addition, it’s a resource where users can find green businesses, organizations, job listings, events and farmers markets in North Texas. Green Source DFW hosts two major annual events – the Run for the Environment 5K in May, and the Sustainable Leadership Awards in November.

Green Source DFW director Wendel Withrow served as emcee for the evening, which he dubbed  a “celebration” more than a fundraiser.

Before announcing the winners in six categories, he addressed the eclectic crowd of 150 attendees, which included eco-friendly business leaders, civil servants, grassroots activists and volunteers. 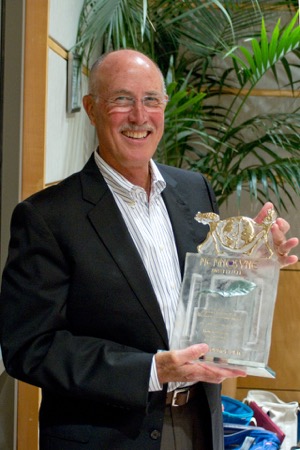 “I agree with Trammell,” referring to the conservative founder of Earth Day Texas, Trammell S Crow. “[Saving the environment] should not be a political issue. We need everybody to be involved.”

He lavished praise on the 18 finalists for their high quality efforts. He admitted that a few of the races required “gut wrenching” decisions to break ties.

“We had a secret panel of judges. In cases of ties, we had to go to the double secret panel,” he joked.

Half Price Books CEO and president Sharon Anderson Wright accepted the award for Large Business. The Dallas-based company pioneered the practice of recycling books throughout its stores following the company’s founding in 1972 by her mother Pat Anderson and Pat’s partner Ken Gjemre. While accepting the award, Wright plugged her new eco-friendly venture Rooster Home & Hardware, formerly Gecko Hardware, which she acquired in September.

Dan Lepinski of the North Texas Renewable Energy Group received the award for Nonprofit Professional for powering local events with his self-designed solar shuttle and educating people around the state about the benefits of solar power. He also helped overturn a strict solar ordinance in North Richland Hills last year.

Susan Pollard accepted the Small Nonprofit award on behalf of Texas Honeybee Guild for its longtime and often creative advocacy for bees and pollinators, such as its notorious public 'swarms' in bee costumes.

Heather Rinaldi, head wrangler at Texas Worm Ranch, received the Small Business award for her innovative eco-friendly gardening practices. She's also convinced many a gardener to test these methods through her workshops, outreach and social media.

Anna Clark was honored as this year’s For Profit professional. Clark, the founder of EarthPeople consulting firm and author of Green, American Style, has contributed articles on sustainability to numerous local and national publications. However, she gained notoriety in recent years for launching a state-wide effort to ban the shark fin trade in Texas. As a result, a coalition involving the Humane Society of the United States and Shark Stewards, a San Francisco-based non-profit ultimately succeeded in making Texas the first red state to restrict shark fin consumption and commerce. Governor Abbot signed the bill into a law in May 2015.

Dallas activists Chris and Dick Guldi, received the Volunteer award for their tireless work in the trenches of local environmental activism. The couple has a reputation for doggedly attending hearings, disseminating information and lobbying politicians on behalf of the most pressing environmental issues in North Texas, in conjunction with the Dallas Sierra Club, Citizens Change Lobby, Public Citizen, North Texas Renewable Energy Group, Downwinders At Risk and Environmental Defense Fund. 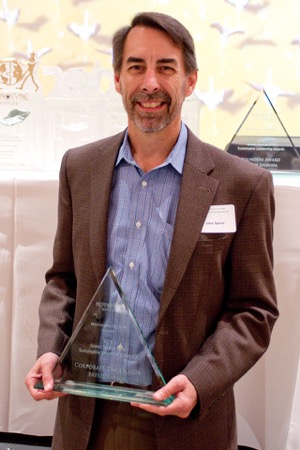 Several specialty prizes were also given.

John Spicer accepted the Corporate Trailblazer award on behalf Breeze Energy, a Dallas-based company founded in 2012 by Spicer and fellow Texan Walter Hornaday. The two engineering school graduates formed the first and only electric provider in Texas to provide 100 percent wind energy to all of its customers. 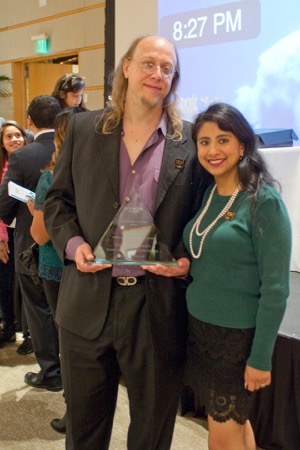 In addition, Withrow honored Green Source DFW creator Phillip Shinoda, who was unable to attend, and Memnosyne Institute cofounders Mary Ann Thompson-Frenk and Joshua Frenk. They each received the Founders Awarder for their innovative vision to bring the North Texas green community together via Green Source DFW.

At the podium, Garrett chronicled his transformation from traditional landscape architect with a degree from Texas Tech to the nationally-known syndicated radio host, author and staunch organic gardening evangelist he is today. Over the years, he’s documented  the success of organics in both small and large scale applications.

He summed it up with one slide “The natural-organic program works better in every way.”