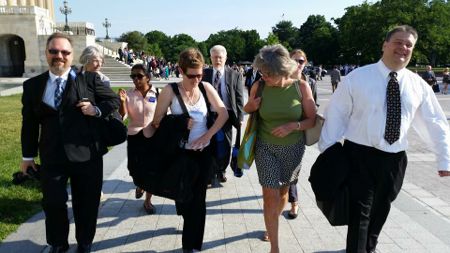 Above, Members of the DFW Citizens' Climate Lobby coaltion Shawn Reeder,  left, and Swetha Kannen and Jim Moffitt (behind to his right), head to meetings with members of Congress and their aides in Washington, DC, at last year's lobbying day. Photos courtesy of CCL.

On the heels of the release of the Pope’s encyclical on the environment, 10 North Texans will be part of a Citizens’ Climate Lobby blitz in Washington, DC this week to urge Congress to adopt a carbon tax. That's double the number that went from DFW last year for the annual lobbying day.

The international nonpartisan organization, formed in 2007, trains people to promote political action on climate change. The grassroots nonprofit aims to convince Congress to pass a tax on oil, gas and coal companies, based on the carbon dioxide generated by the burning of these fossil fuels, considered to be the main cause of global warming. The revenue would be distributed to the public.

“People immediately fall on one side of the issue [of climate change] but we believe it can transcend political partisanship,” said Brett Cease, co-organizer for the Denton-Lewisville Citizens' Climate Lobby chapter. “What we’re proposing is the most conservative friendly solution to the problem.”

Today with more than 200 chapters nationwide, CCL launched its first DFW chapter in Dallas in 2012. Earlier this year, a chapter in Denton formed and a Fort Worth group is expected to launch by the end of the year.

As chapters spread across the U.S., attendance at CCL’s annual conference in DC has grown since the first conference in 2010. According to Ricky Bradley, Dallas-based director of CCL’s Third Coast Region, more than 800 CCL members will lobby on Capitol Hill on Tuesday. They plan to speak to the offices of every member of Congress – a milestone this year.

Bradley says the media buzz from the Pope’s message is timely for the group’s visit, however he admits it may not have a huge impact on North Texas politicians.

“This is a tricky one,” he said. “Religion is not a hammer you want to wield.”

Cease said five members from his group will be part of the 36-member coalition from Texas. 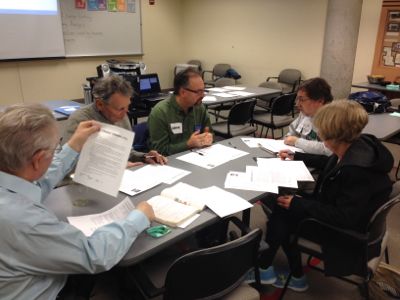 He said they have been preparing for the trip by researching how their representatives have voted and gathering data from the Yale Climate Opinion Map, which shows North Texans are concerned about climate change.

“An overwhelming number of voters really care about climate change and want government  to do something about it,” he said.

He compared the current era to the late 1960s and 70s when the Republican Nixon administration adopted left-leaning environmental policies to appease public sentiment.

Cease, who is working on his doctorate in public policy at the University of Texas at Dallas, has dreams of crafting environmental policy for the government someday. 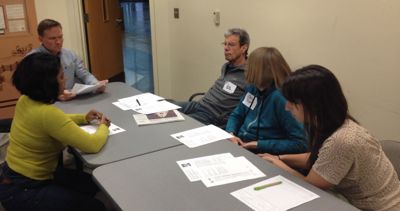 However, he says you don’t have to be a political wonk to participate as a citizen activist.

“Anyone can do this,” he said. “If you care about passing on a livable future to your grandkids, you can come to our meetings and we’ll train you to learn how to have your voice be heard.”

He also urged fellow North Texans to phone their representatives in Congress  while CCL is in DC to demand action on climate change.

Bradley said he believes the annual trip to Washington is having a cumulative effect, even among some of the biggest climate deniers. After months wooing the offices of Ted Cruz, local CCL members heard from the Texas senator’s aide, who called to set up a meeting after snubbing them last year.

“There are conservatives who understand that climate change is happening and know something needs to be done, but can’t come out and say that,” said Bradley.

However, he said it’s widely speculated that some who have been silent on climate change will get on board when their peers do.

That is why they are trying to enlist the support of local businesses, young conservatives and retired military officers to promote carbon tax legislation.

“[Lawmakers] need to hear it from someone they trust,” Bradley said.

“It’s easy for people to think their voice doesn’t matter. But [Congress] will do something, if you create enough political will.”