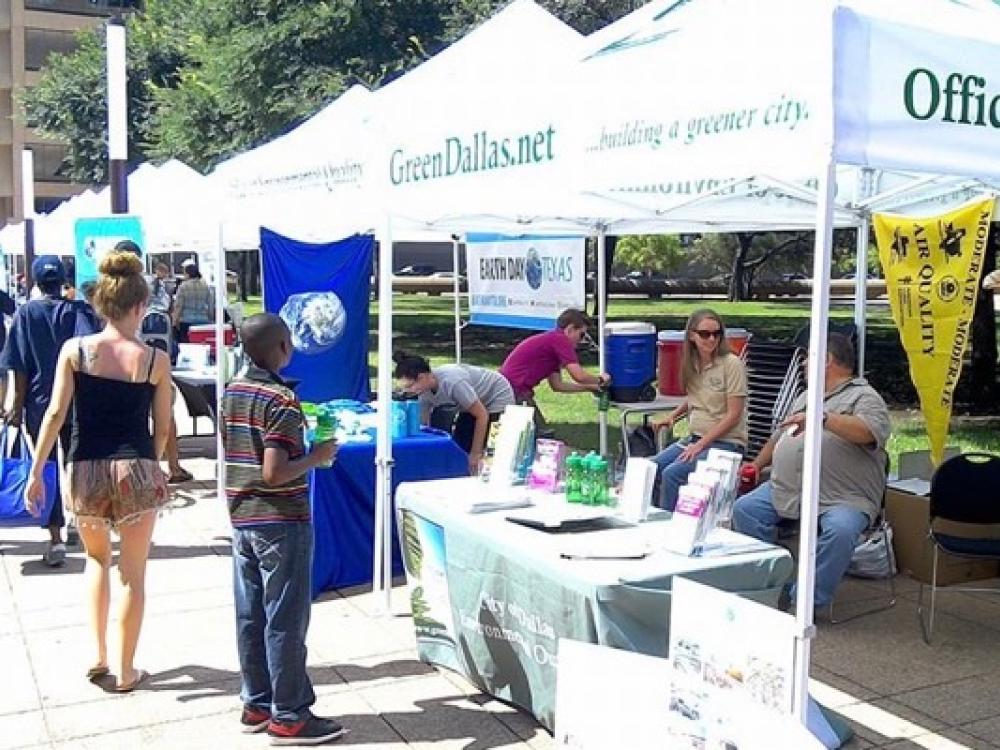 Dallas and Fort Worth are among 12 Texas cities that have signed the Mayor's Climate Protection Agreement. Above, City of Dallas Environmental Quality Department at a recent Clean Air Action Day. Courtesy of Green Dallas Facebook page.

When President Trump stood in the White House Rose Garden in June and announced that he’d withdraw the nation from the 2015 Paris Climate Agreement, the U.S. stood alone with Syria, two holdouts from the treaty signed by the other 195 nations of the world. Until Syria switched sides in November.

Meanwhile, U.S. mayors were also siding with the international community, making their own pledge to reduce carbon emissions and combat climate disruption. After the Rose Garden speech, 350 more U.S. mayors signed on. By December, 1,060 cities were part of the Mayors’ Climate Protection Agreement. Started among member cities of the U.S. Conference of Mayors in 2005 by Seattle Mayor Greg Nickels, the original vow was to reduce the carbon emissions in their cities to below 1990 levels, in keeping with the international agreement at the time, the Kyoto Protocol.

Dallas and Fort Worth were early signees, in 2006-07. Seven more North Texas suburbs participate, among a total of 12 Texas cities as of 2014, the Conference’s last count – Arlington, Denton, Frisco, Garland, Irving, Mesquite and Plano. Dallas Mayor Mike Rawlings re-upped in 2015.

Dallas doubling down on emissions

“We’ve been tracking greenhouse gas emissions since the mid-2000’s,” said James McGuire, managing director of Dallas’ Office of Environmental Quality for a year.

The city cut emissions by its operations from 1990 to 2010 by 33 percent. A new, independent inventory is due for release in 2018. As for supporting emission cuts by the community to fully deliver on the pledge, the city’s role is education and example.

“Utilizing wind power prevents over 550,000 tons of carbon dioxide from being emitted into the air,” says the city’s Green Dallas website.

That puts Dallas above cities like Portland and Seattle as far as renewables, said McGuire.

“Also, it is market-driven. You’re not paying a premium to use renewables, there’s also a fiscal benefit.”

Green Dallas.net posts other CO2-reduction stats for programs that include use of efficient/alternative-fuel vehicles, improving efficiency of city buildings and public lighting and requiring conservation-certified standards for new city buildings.

A city contractor extracts greenhouse gases from the McCommas Bluff Landfill and processes and refines them for sale on the open market.

“It’s refined the same as natural gas,” said McGuire, “and the product you end up with is the same.”

Dallas also turns sewer sludge into a power source. Solids in wastewater –yes, the stinky stuff–flow down sewer lines to Dallas’ Southside and Central Waste Management Plants, where it is turned into gold.

“We have a cogeneration plant at our Southside plant in far South Dallas. It takes all the solids from the Central Waste management plant by the Trinity River and from Southside and ships it to a central location. It’s processed to generate methane gas and burned to create 40 -50 percent of the power that runs the Southside treatment plant,” he said.

Why does greenhouse-gas reduction matter to cities? Without a cut in emissions, EPA’s climate models cited on greendallas.net predict an unfriendly and costly future:

–Hotter, longer, more frequent heat waves with about 20 more days a year over 100F degrees by mid-century. This threatens health and air quality, taxes the energy supply and deteriorates roads and other hard surfaces.

–Decline in precipitation and increase in severe droughts, straining water supply, degrading water quality in rivers and lakes and increasing risk of wildfire.

Which has the most effect on CO2 levels?

“Improving energy efficiency in our facilities is huge, especially at ones related to wastewater treatment,” said Kelp.

Waste diversion from landfills via recycling is an important goal, she noted. Fort Worth had curbside residential recycling before Dallas.

In a country where 6.8 million metric tons of greenhouse gases were emitted into the air in 2014, according to the EPA’S 2015 inventory, how can a city’s effort contribute?

“As state and federal regulators pull back, local residents express a need for local governments to fill that regulatory gap and do more to meet that challenge,” said McGuire. “They’re concerned with what’s going on and are comforted that their local governments can help.”

Denton going all in with renewables

Another local milestone for renewable energy came this week when Denton City Council voted to adopt a plan to become 100 percent renewable by the end of 2020. Denton is the second Texas city to do so, following Georgetown. According to KERAnews.org, Denton currently purchases about 44 percent of its electricity from renewable sources.

“The city of Dallas has a contract with TXU to provide municipal builidngs with 100 percent wind power but individuals within Dallas pick their energy provider," he said via email. "Denton residents and businesses get all their power from DME which under the plan will contract with renewable providers directly."