North Texas prairies have new advocate fighting for them 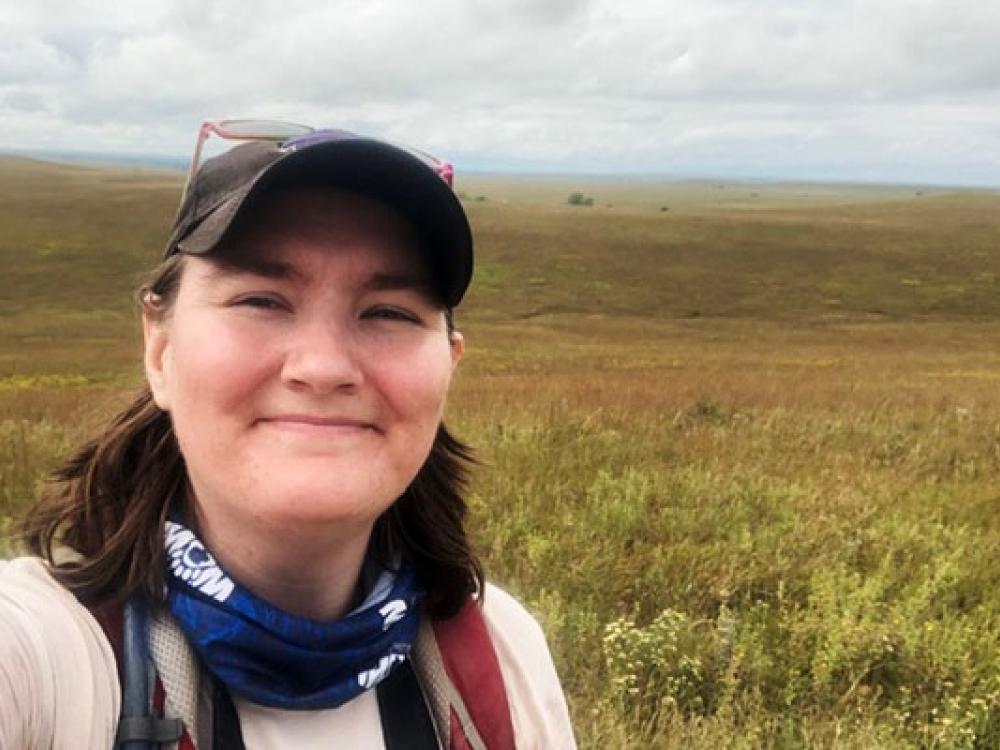 Carly Aulicky is the new North Texas outreach and stewardship director​ for the Native Prairies Association of Texas. Photo courtesy of Carly Aulicky.

Following her scholarly path, Dr. Carly Aulicky has hopscotched from New Jersey to Scotland to Ecuador to Kansas. Lucky for us, she’s recently landed in North Texas. Now based in Denton County, she was hired in April by Native Prairies Association of Texas to serve as the North Texas Outreach and Stewardship Director, a position created this year.

Along her journey, birds have remained a constant, from the songbirds of her New Jersey childhood, to the blue-crowned manakins (Lepidothrix coronata) of her master's degree, to the lesser prairie-chicken (Tympanuchus pallidicinctus) of her Ph.D.

It was in the vast expanses of Kansas — whose Flint Hills are home to the largest expanse of tallgrass prairie left in the world — where a passion for the prairie arose in Aulick, dovetailing with her avian avocations. The National Audubon Society states that "Prairie birds have shown the most sustained population declines of any bird group in North America." 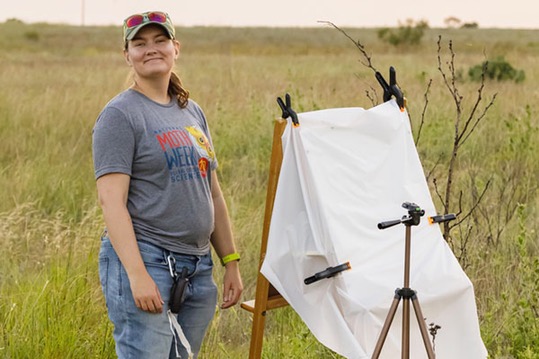 Carly Aulicky with her "mothing" set-up during Moth Week at Maddin Prairie in Mitchell County. Photo by Meghan Cassidy.

When applications for the NPAT position opened in North Texas, where she met her partner Meghan Cassidy, it felt like kismet.

Aulicky has a lot on her plate. Breakneck development is gobbling grasslands. Less than one percent of Blackland Prairie remains. Remnants lost in the past few years include a hundred acres in Mesquite that supporters called Pioneer Prairie, now a warehouse site. The 60-plus acres of Beck’s Tallgrass Prairie on the Plano-Richardson border are slated for residential and industrial development.

Much of the 2,100-acre Smiley-Woodfin Prairie near Paris, Texas’ largest section of native grassland, is under contract to become a solar farm. A slightly greater fraction of the Fort Worth Prairie remains, but bulldozers destroyed thousands of acres in southwest Tarrant County in the last few years.

"The North Texas Outreach and Stewardship Director position is vitally important to our strategic plans to save more Texas prairie," says NPAT development director Jeff Sargent. "Because the DFW Metro Area is expanding so rapidly into valuable Blackland and Cross Timbers grasslands, we knew we had to act fast. We also have several of our most valuable protected prairies in this region. Carly brings a unique combination of the scientific skills to monitor the ecological health of our properties, and the organizational skills to manage, expand and lead some of our highest-impact education programs."

Prairies suffer from an additional threat: brushy encroachment. The extirpation of bison and suppression of wildfires removed the two major forces that kept trees from taking over prairies in areas of sufficient rain. Prairies provide prime habitat and far more diversity than such brush-choked areas. The decline of prairies along with grassland birds and monarchs (along with other insects) are parallel.

A group of us zip down a gravel work road in an all-terrain vehicle on the east side of Lewisville Lake Environmental Learning Area with restoration manager Richard Freiheit behind the wheel. Scott Kiester, who coordinates the Texas Master Naturalists volunteer projects at LLELA, Aulicky, and myself are on board for what’s affectionately known as “Richard's Wild Ride.”

We turn onto the broad Barn Owl Ridge, a broad plateau undulating with rounded clumps of native grasses and wildflowers in shades of fading green to crisp ruddy brown. In mid-November, few flowers remain, but the feathery flares of Indiangrass seedheads shimmer in the light breeze, in contrast to stiff towering stalks of dried Maximillian sunflowers. 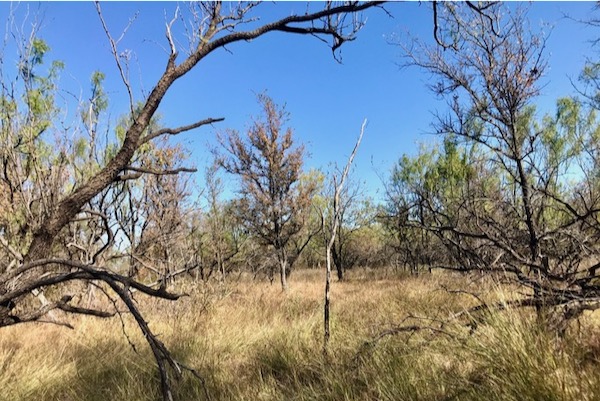 In an area cleared by chainsaws of brush overgrowth, prairie returns at LLELA. Photo by Amy Martin.

We drive on a mowed road, birds scattering from our approach, past solitary trees and amid cedar elm copses, passing through a large prairie patch and then more brushy trees and back into the sunlight. Several decades of aerial photos show the grasslands being inexorably eaten by brush spreading from fencelines, says Freiheit.

“We think about the grass now as a river flowing through the forest, and we're going to enlarge the size of the river and create islands of forest in a sea of grass,” says Kiester.

Stopping at a 12-foot-wide circle of ashes, where dozens of mesquites and other brush trees were cut and burned by volunteers, it stills smells like a barbeque. Aulicky avidly absorbs Freiheit’s explanation of turning these ash- enriched cleared spots into prairie starter plots, planted with natives from the LLELA greenhouse and encouraged to spread. Other areas boast a plethora of stumps — each cut by hand, treated, and then burned or allowed to decay — while native plants, newly stimulated by light, resurge around them. 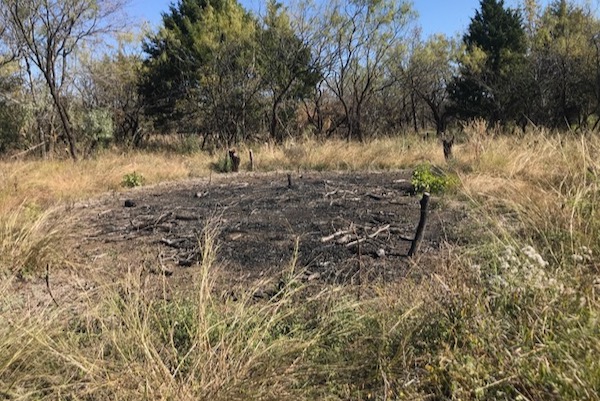 A burn-pile from a controlled burn at LLELA will be planted to create a prairie starter plot. Photo by Amy Martin.

After a loop through the Old Bison Field, a site of future prairie restoration, and a visit to its viewing platform, we return to LLELA offices. Several busloads of Lewisville middle-school students toss a ball and eat at picnic tables beneath oak trees. A rest break for the group after planting native grasses all morning. 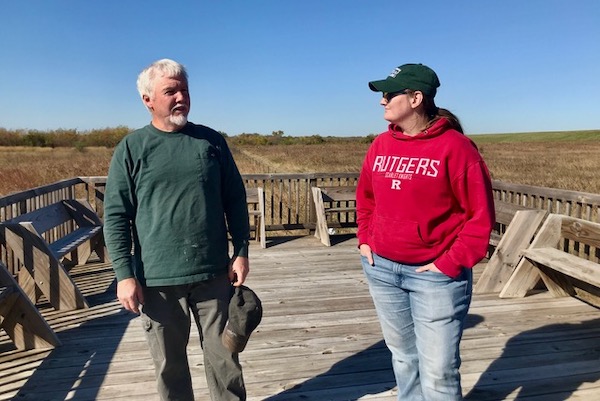 Richard Freiheit and Carly Aulicky talk on the viewing platform in the Old Bison Field at LLELA. Photo by Amy Martin.

As we drive the service road beneath a corridor of giant electrical towers, we see hundreds of colored flags on short wire stems fluttering in the adjacent grasslands. The different colors denote the different schools in Lewisville ISD that visited. Each plant was installed by students under the supervision of Texas Master Naturalists like Kiester and Tim Trosper. In the distance, as the corridor crosses a creek, we watch a passel of students animatedly digging in the dirt.

Hundreds of all ages are here today, entirely focused on preserving the prairie, creating habitat for pollinators, and celebrating the Earth's connectivity. Students can look at the sea of colored flags and be proud of their work, return in succeeding years and watch it grow. Maybe even volunteer to help, perhaps choose ecology as a major at UNT. All a part of LLELA’s generational plan.

Sitting at a picnic table among the chattering students, Aulicky shares her approval.

“What I've seen today at LLELA has been absolutely amazing,” she said. “They do an outstanding job of connecting as many people as they can to prairie and why it should be here, why it’s important. And that's beyond education. That's an emotional connection, a sense of place." 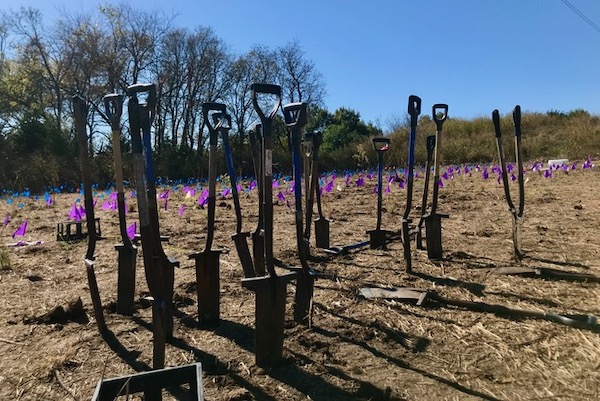 Shovels rest after planting in front of flagged plants in the ground at LLELA. Photo by Amy Martin.

PRAIRIES ARE THE ANSWER

"I spend a lot of time thinking about my role in this position and what I can do with it," continues Aulicky. “I think particularly about people being emotionally invested in prairies and how to help them, so they feel that connection and draw the realization that changes are coming, things that are going to affect our cities and prairies are going to be a solution to that."

"Prairies are our ticket to resiliency for everything that is coming. If you look at major national disasters any year, Texas normally has a couple in the top ten. When you're talking about flooding, fire, drought, and water-quality issues, which are all increasing, prairies can be essential to coping. And NPAT is here to help you with that."

In just her short time in the position, Aulicky has coordinated a well-received landowner workshop with Dixon Water Foundation and hosted Moth Week events at NPAT’s Maddin Prairie in the Panhandle. With NPAT’s Fort Worth chapter, she conducted a weekend of Prairie Seekers, which trains citizen scientists to identify and assess prairies for conservation, and plans to take the program statewide. She’s reviving NPAT's Native Prairie Registration Program and helping form a chapter for northeast Texas where NPAT oversees a concentration of prairie holdings. Another focus is building a North Texas conservation alliance so that NPAT, LLELA, The Nature Conservancy, naturalists, and others can collaborate more fruitfully. 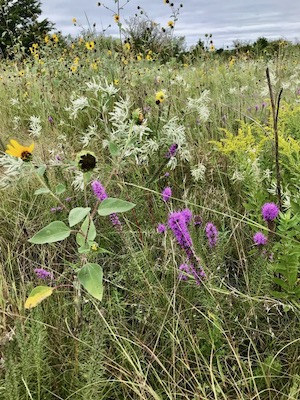 But cities are also on Aulicky's radar. She speaks passionately of the need to convert more unused turf areas to prairie, or significantly reduce mowing, saving an estimated $50 per acre per month. Prairie’s dense biomass absorbs stormwater and slowly releases it. It acts like a sponge, unlike pavement or turf, which sheets off rain at enormous velocity into storm sewers. Storm sewers, in turn, empty into creeks, scouring and eroding them.

“I’m going to be giving a municipality talk in 2022, talking directly to cities about why they need prairie. With the amount of climate fluctuations that we're going to get, prairies are the way to go,” she says.

HOPE ON THE PRAIRIE

By one method or another, Aulicky plots ways to create more prairie converts.

"If I can’t sell them on an emotional attachment to a particular plant, or what prairies look like or what they can do, maybe it’s what it means to them to be a Texan. Texas is a prairie heritage state."

Every acre of prairie plowed or bulldozed is centuries of Texas heritage wrecked for something as temporary as warehouses. Extensive networks of roots and mycorrhizal pathways — fungi which grows in a symbiotic relationship with the roots — as ancient as any old-growth forest destroyed with little thought.

“Texas in pre-colonial times is estimated to be two-thirds prairie land," relates Aulicky. “When you consider how vast Texas is, it’s a lot of land. We're down to one percent of tallgrass prairie, one percent of coastal prairie. Nationally, we’re talking about less than 40 percent of mixed grass, and 50 percent of shortgrass and dryland grasslands. It’s a loss so vast, it’s hard to put your brain around it." 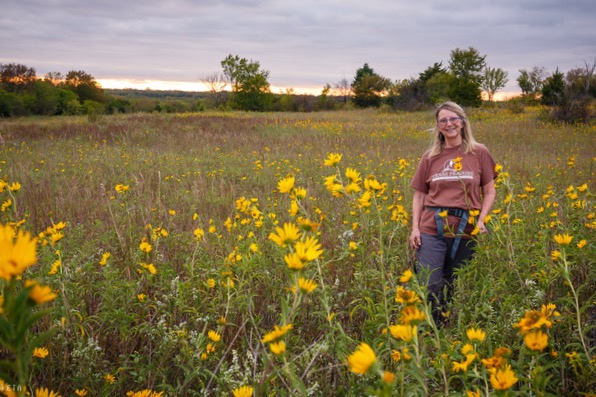 But Aulicky is resolved.

“Just because there’s one percent left doesn't mean it’s without value. And it doesn't mean that there can't be a comeback story. It’s going to be vital for our livelihoods, our longevity and our happiness. We’re going to find it’s a lot harder to man-make the ecosystem services that prairies provide for us. So even though we’re talking about one percent, it’s invaluable as that one percent. We should be doing everything we can to get it everywhere we can.”

Goodbye to a prairie: Richardson meadow slated for development