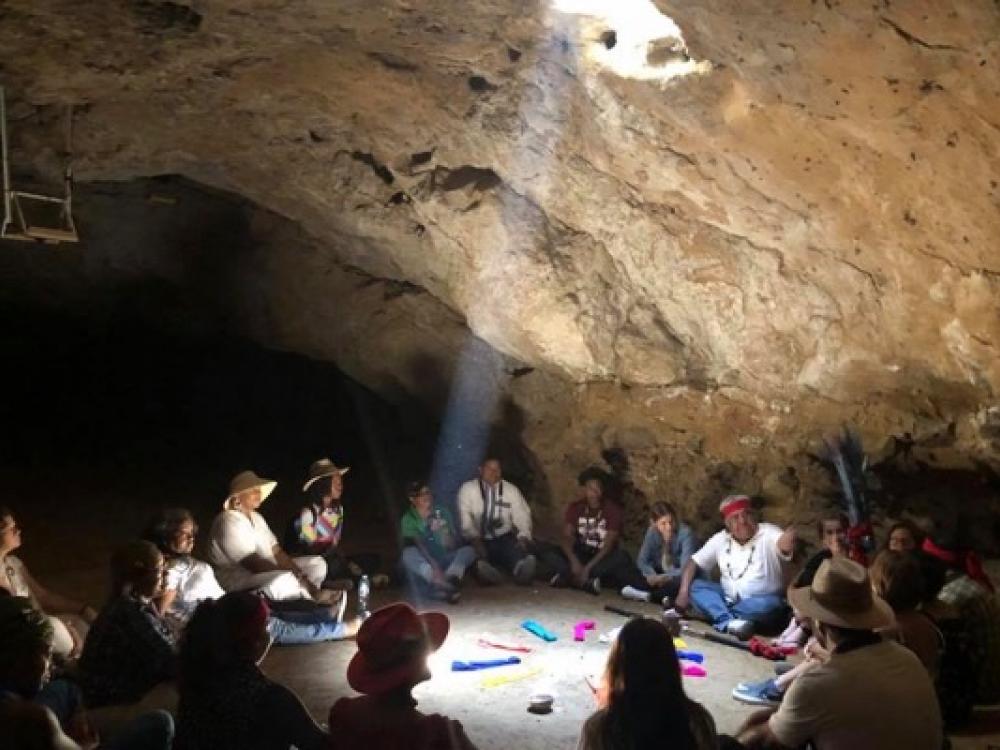 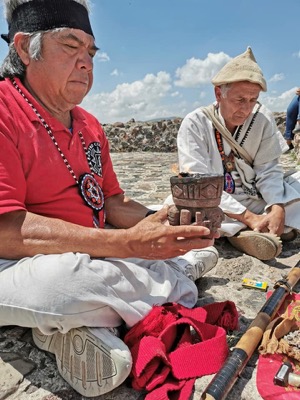 Ricardo Cervantes Cervantes dances for the cosmos, as befits his sacred Toltec name Tlahuizcalpantecutli meaning “boy of the stars.”

At age five, he fell into a 30-meter deep well near his home outside Mexico City. For three nights, he could look up and see only stars. He felt sustained by a spiritual energy until found by family members.

“I’m alive and I’m very happy,” Cervantes says in his broken English over mid-afternoon snacks in an Oak Lawn chocolate shop in December. “I decided to get interest in nature, have respect for nature.“

The dramatic incident would propel him on a lifelong path of Earth intuitive and ceremonial leader associated with the immense ancient pyramids of Teotihuacán, where he grew up in an indigenous area.

Today Cervantes is a leader at a cultural center created by the Dallas-based Memnosyne Institute, the parent nonprofit of GreenSourceDFW.org, north of Mexico City. The center is part of Memnosyne's philanthropic work with indigenous cultures, which the nonprofit sees as key to its overall vision to promote cultural advancement. 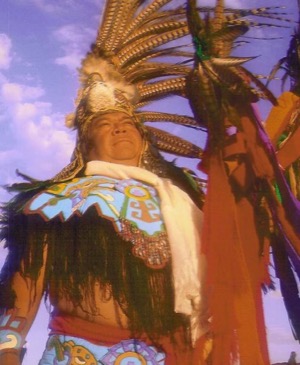 Not long after the well incident, relates Cervantes, “My parents say ‘We’re going to take you to see your grandfather’s ancestors.’ I say, where? And they took me to the anthropological museum in Mexico City.”

There in the awe-inspiring statues, carvings, and artwork of Nahua deities Quetzalcoatl, Coatlicue, Tlāloc, Chalchihuitlicue and more, Cervantes was introduced to the spiritual iconography of traditions he felt charged to convey.

Cervantes acts as a conchero (ceremonial dance leader) for his Tlahuizcalpantecuhtli Teopanacazco Autoctona Dance Group and as confidante and healer for his and a half-dozen other communities near Teotihuacán whose roots go back at least six centuries. It’s a role he has trained for all his life, culminating in being the only indigenous spiritual leader from Latin America at the “Seeds of Compassion Conference” in 2008, where he exchanged blessing ceremonies with His Holiness The Dalai Lama. 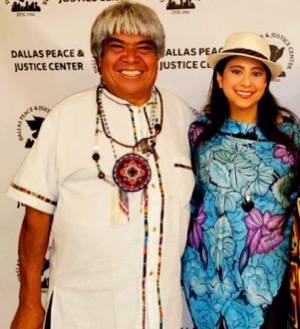 “When I try to explain what his job is in his community,” says Mary Ann Thompson-Frenk, co-founder and president of the Memnosyne Institute. “It’s like a priest, a minister, mayor, a psychologist — it’s like all that and more. All want to spend time with him. It’s like that 24/7. He gets to sleep when he visits us in Dallas.”

TEOTIHUACÁN: LAND OF THE TOLTECS

In its 300 BCE to 500 CE heyday, Teotihuacán was a large prosperous urban center, possibly the largest in the Americas. A place of grand ritual and immense celebration, residence of a spiritual and ruling elite, and surrounded by the homes and businesses of thousands. All of it set in a verdant valley nestled by picturesque mountains. After the collapse of Teotihuacán, the Toltecs of Tula dominated the site until about 1150 CE, with Toltec families continuing to be a major presence in the area. 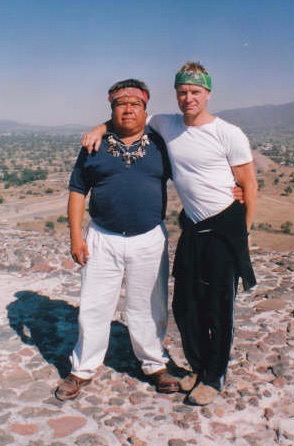 Now the Teotihuacán area is drier and less wild, laced by highways and rife with development, even a Mexico version of Walmart. But Cervantes still recites a litany of cacti that grow there, the color of their flowers, each with its purpose, medicine or food or support to animals, each one he holds to be beautiful. He knows the nearby mountains, their caves and creeks, flora and fauna, equally as deep.

Cervantes leads Toltec knowledge retreats and is a popular tour leader at Teotihuacán through his eco-tour agency Gorila’s Tours , referring to his childhood nickname. He served as a tour guide for a variety of celebrities including Mick Jagger, David Bowie, Katy Perry, and members of Creedence Clearwater and the Scorpions.

“The funny thing is,” says Thompson-Frenk, “is that when somebody like Katy Perry comes in and wants to learn, she puts out on Twitter how it brought her to a deep understanding. Suddenly people that had ignored the culture are like ‘Let’s go check this out’.”

Schoolchildren and families from all over the central valley of Mexico come to the Centro Cultural Tolteca seeking insight into a part of their history not often taught in schools. Cervantes speaks with deep pride of the attire and tools that transform him into a timeless ceremonial Toltec leader.

“I take my headdress and my regalia and my dance group, all this knowledge, all my tradition. We teach them the Nahua languages. Sometimes they won’t speak it. It shows they are Indian. They need to be proud of that, of who they are. I feel very proud that I can make them feel proud.” 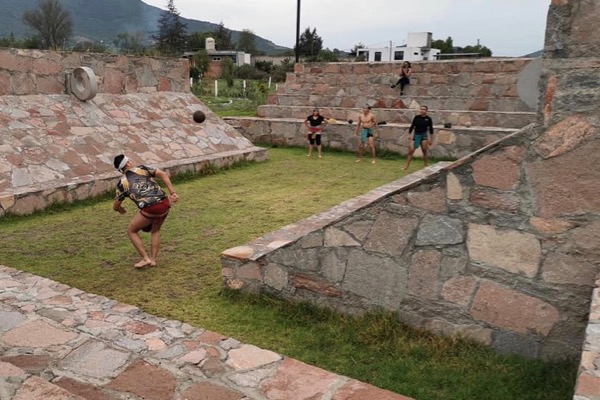 “We teach the art of painting, how to get the colors from the insects, from the cactus, from the stones, from the green plants. We teach how to grind the corn and make tortillas, how to make the guacamole,” says Cervantes.

While cellphone use tends to separate kids from their culture and feel apart from the natural world, Memnosyne found a way to connect:

“You know the traditional Toltec ballgame?” says Thompson-Frenk.” We worked with a designer named Christina Pineda, a computer game designer. They created a computer ballgame online and after playing it the kids got interested in the real game.”

Memnosyne raised funds and orchestrated the construction of a ballgame court at the Centro Cultural Tolteca. In the game, shared by many Mesoamerican cultures, a large heavy rubber ball is moved about the court by bouncing off the hip, though sometimes other body parts and rackets are used. The ultimate goal is to send the ball through a narrow courtside ring.

“They know how to plant the corn. They know how to do how to harvest, make the food. The ballcourt is part of the same heritage,” says Cervantes. “We do the education, to find the harmony of their spirit, to find their roots. Then there can be freedom.”

DEVELOPING A CONNECTION TO NATURE

Most of us were not fortunate to be raised in a legendary natural mecca like Teotihuacán or have access to a place like Centro Cultural Tolteca that teaches nature mysticism. Cervantes’ advice sounds much like the approach of groups like North Texas Master Naturalists: Train leaders to take people out into nature, especially the young, and make a nature a tactile experience you can touch and smell.

Competition engages children, Cevantes feels, and tying into seasonal harvests helps them become attuned to rhythms of nature. A prime way to do that is foraging for food. He suggests making it into a game, describing how when grasshoppers and certain kinds of large worms mature, children compete for who can collect the most for adults to cook. 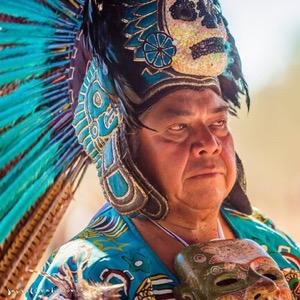 A connection to the land can’t be all fun and games, he cautions:

“I take the kids to the mountains and caves and I teach them how to take their seeds and make an offering to Mother Earth. We tell them, ‘If you want one flower, plant five. And you must water them.’ Nature is beautiful but also hard.”

“Everybody wants to go to the mountains,” Cevantes continues. “We take them at night for full moons and shooting stars. The kids, they want to go there because they want to play, they want to roam. Then they are free, they are themselves.”