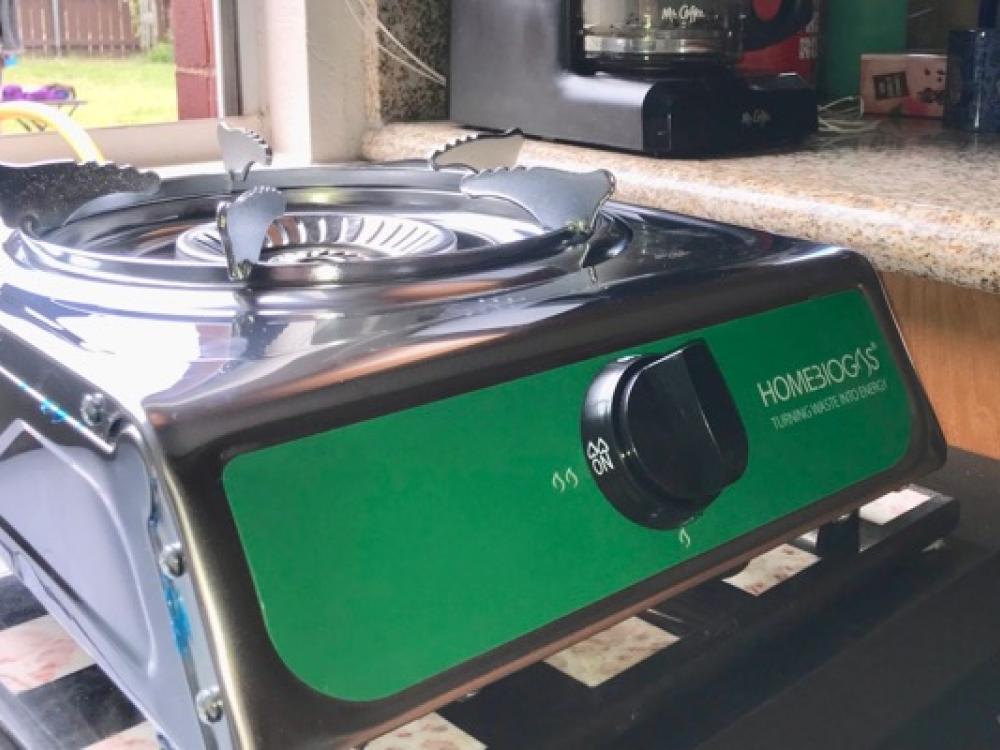 Evan Boehler installed a biogas system at his home in McKinney in May. Photo courtesy of Home Biogas.

A McKinney resident is turning food waste from his kitchen into energy.

Evan Boehler said he’s always tried to live lightly on the earth. So when he learned he could turn food waste from his kitchen into household fuel, he leaped at the chance.

Now in a sunny spot beside his McKinney home, he feeds vegetable scraps, stale bread, tossed leftovers and anything scraped off his family’s dinner plates into a home biogas appliance. The system digests the waste and churns out methane gas that feeds a specially designed cooktop in his kitchen.

“We mostly use it to cook meals, heat up tea and make popcorn,” Boehler says. “We have been able to almost eliminate our conventional stove use.” 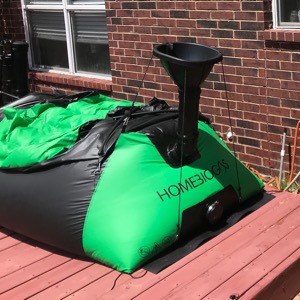 Resembling an inflatable toy and taking up no more yard space than a large riding lawn mower, Boehler’s waste-converting appliance was one of the first to be installed in Texas by the Israeli company Home Biogas.

Formed in 2012 and backed partially through crowdfunding, the company was founded by Yair Teller, Oshik Efrati and Erez Lanzer who moved their idea for an eco-friendly energy source from the drawing board to people’ backyards in a just few short years. Their mission is to take the technology throughout the world to bring a sustainable fuel source to those who need it the most, says HomeBiogas representative Rebecca Farhi.

“Yair Teller discovered the wonders of biogas while traveling through India," Farhi says. “He knew the technology had great potential but saw that traditional structures lacked in many ways."

From then on Teller was on a mission to improve and expand the reach of biogas, sparking the inspiration for HomeBiogas.

"It is our mission to give power to the people - to provide accessible, affordable and renewable energy for all," said Farhi. "Many people around the world use cooking methods which are harmful to their health and the environment. With HomeBiogas, you can create your own renewable cooking energy, and fertilizer, right from your backyard and you can do it using your waste. This way, we also address the growing issue of waste and enable people to grow their own food.”

The appliance is little more than a large, plastic bag that sits on the ground and holds water with an expanding bladder on top. Kitchen scraps are fed into the appliance through a pipe that connects to the bottom chamber. In the bottom bag, anaerobic bacteria digest the waste and emit methane gas in a process that’s much like digestion in our stomach, Farhi says. As the gas bubbles up through the water, it collects in the upper bladder which stores the gas under low pressure. 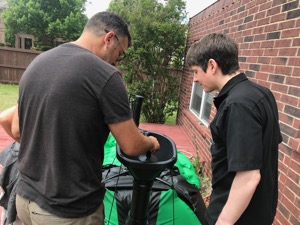 Evan Boehler, right, gets help setting up his system from a Home Biogas rep. Courtesy of Home Biogas.

A flexible gas line runs from the storage bladder to the cooktop, supplying methane fuel for hours of cooking. A filter in the gas line removes noxious odors. Installation is a simple do-it-yourself project, and the company’s customer support representatives can help users with the step-by-step process.

As bacteria break the waste into basic compounds, the water in the lower chamber gradually becomes filled with a rich source of plant nutrients. With just the twist of a spigot that can connect to a hose, users may water and feed their trees, shrubbery and vegetable gardens with the effluent.

“How much you get out all depends on how much, and what, you put in,” Farhi explains. “You can feed the system up to 12 liters of food waste, or 36 liters of animal manure, per day. In return, this would generate about three hours of cooking gas on a single burner and 12 liters of liquid fertilizer per day.”

The company also offers a specially adapted cooktop that can be placed on a counter and connected to the low-pressure gas line that’s fed by the Biogas appliance. The only alteration to the home is a small hole that’s drilled through an exterior kitchen wall. Farhi says most owners use the gas for cooking, but some have connected their appliances to an outdoor lantern or firepit as well.

“We have customers around the world in over 90 countries so the motivation and uses for our appliance vary greatly,” Farhi says. “For example, we have customers using HomeBiogas to replace wood-burning stoves that cause millions of deaths a year. Others are interested in living completely off-grid and being energy independent - doomsday preppers. Some are devoted gardeners who cherish the rich, natural, fertilizer. And many others are your average family just trying to do their part for the environment.”

The U.S. EPA estimates that as much as 38 million tons of food waste were generated in the country in 2014 and of that only about five percent was averted from the landfill and composted. Buried in the landfill, food waste is broken down in an anaerobic environment, much like it is in the HomeBiogas appliance, and the methane produced in the process is released into the atmosphere. Landfills, the EPA estimates, are the third largest source of all human-related methane emissions.

In the atmosphere, methane is a far more powerful climate-changing gas than carbon dioxide, trapping heat at a rate 84 times greater than CO2. The Environmental Defense Fund estimates that as much as 25 percent of manmade climate change is caused by methane.

Farhi says the HomeBiogas appliance harnesses that methane and offsets the fuel a user needs to cook meals each day.

“What HomeBiogas does is help utilize this gas instead of letting it freely dissipate into the atmosphere,” she says. “It can reduce six tons of greenhouse gases annually, the equivalence of taking one car off the road for a year.”

Recovering methane from waste is nothing new. Industrial projects around the world have been built to capture methane emissions from landfills; the city of Denton generates electricity for up to 1,600 homes through a power plant designed to run off methane from the city’s landfill. For the last half-century, the permaculture and self-sufficiency crowds have designed and built home biogas systems out of everything from repurposed barrels to all-new concrete constructions. What the HomeBiogas company brings to the pursuit is a ready-made appliance that can be shipped anywhere in the world in a lightweight box and set up in an afternoon by people with only minimal tool skills.

Citing a World Health Organization statistic, Farhi says the appliance also addresses another problem facing the world’s population: about three billion people around the globe still cook over an open fire, burning wood, animal waste or coal. The indoor pollution from the smoke prematurely kills about 4 million people each year. Simultaneously, waste disposal and sewer systems in these regions are often inadequate - if they exist at all.

“We have social projects happening in many countries. For most of these communities, the main focus was to replace their wood-burning stoves which pose health risks with clean energy and providing a waste management solution,” she says. “We have plans for the future to work alongside the UN to bring biogas to refugee camps where hundreds, or even thousands, of people live for what could become years.”

Another Home Biogas customer demonstrates how the system works. Courtesy of Home Biogas.

3 Months Later and Couldn't be Happier!

Sales in the U.S. of the $590 appliance are part of what funds the company’s expansion and philanthropic outreach. Farhi says that HomeBiogas owners can recover the cost for the appliance in about two years, from savings in home energy bills and the value of the liquid fertilizer.

After being the first in Texas to install a Biogas 2.0 appliance in April 2018, Boehler has been joined by 41 Texans who’ve caught on to the concept. He’s already experienced its benefits and says that what first appealed to him is how the appliance allows users to make an immediate change in their environmental footprint.

“It depends on the meal, how often we have cooked that day, how much waste we have put into the HomeBiogas on the days prior and whether or not the meal requires multiple burners at the same time. That all being said, most days we burn off excess gas, rather than not having enough,” he says. “I have been using the fertilizer for the landscape, and the shift seems dramatic. Overall, my experience with home biogas has shown me just how much of a benefit to society it would be if we removed food waste from our trash cycle and turned it into gas and fertilizer. We lose so much money and energy to the landfill, where it benefits no one.”