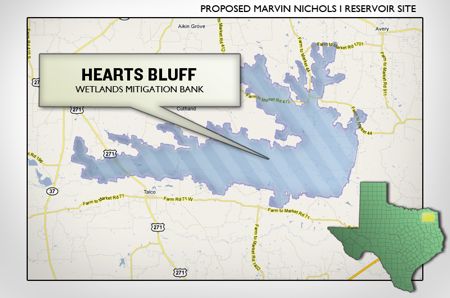 By Neena Satija
The Texas Tribune

It was an argument the state's top water planning officials had long avoided, over a huge lake that probably won't exist for decades — if ever.

D-FW planners say the lake will shore up badly needed water supplies for their growing region in the coming decades. But the vote dismayed opponents from Red River, Titus and Franklin counties, some of whose land would have to be flooded to make way for the reservoir. Environmental advocates also say the reservoir is unnecessary and would harm wildlife and precious forestland in East Texas.

In a statement after Thursday's decision, Luke Metzger, director of Environment Texas, expressed disappointment. "This project makes no sense — it's not needed, the public opposes it, and it would cause significant harm to our state's forests and waterways."

There are still other ways for opponents to fight the project once planners apply for state and federal permits to build the reservoir — if they ever do so.

In the meantime, Rep. David Simpson, R-Longview, is trying the legislative route. Simpson, who does business in Northeast Texas' lucrative timber industry, filed a bill Thursday that could effectively prevent Marvin Nichols from staying in the State Water Plan.

Under the proposed legislation, the reservoir could stay in the water plan only if two-thirds of the members of Northeast Texas' regional water planning group agree. The same would be true for any project that one region proposes to build in another.

Marvin Nichols has long been a sore spot between the arid, exploding Dallas-Fort Worth region and wet, swampy and sparsely populated Northeast Texas. Even though there are no plans to build the reservoir anytime soon, it has been in the State Water Plan — essentially a combination of 16 regional plans, all needing state approval — for decades. But while the D-FW region's plan lists the reservoir as a key water supply strategy, Northeast Texas' plan explicitly rejects the construction of the lake.

The issue is politically fraught enough that the Texas Water Development Board chose to accept the contradicting plans, despite calls from some in Northeast Texas for the agency to step in and mediate the dispute. Opponents of the reservoir plan sued the agency to force it to get involved, and the court ruled in their favor.

"The Board is in a position to resolve the conflict in the manner that is most consistent with protecting the state's agricultural and natural resources," Terry McCall, a Texas Court of Appeals justice in Eastland, wrote in May 2013.

The board continued to delay a decision, though, asking last August for D-FW planners to measure the impacts of Marvin Nichols.

"The primary impact of the proposed Marvin Nichols Reservoir on wildlife habitat would be the inundation of habitat by the reservoir," reads the dry but direct assessment, prepared by the engineering firm Freese and Nichols. (The reservoir is named after a former partner at the firm and one of Texas' first water planners.) "Cultural resources," including dozens of prehistoric sites, would also face "inundation." But the report concludes that only a tiny percentage of prime farmland and timberland would have to be flooded.

Northeast Texas planners responded that the report is "fatally flawed," and failed to address the proposed reservoir's true impacts, including the economic ones.

Because Marvin Nichols is allowed to stay in the State Water Plan, the reservoir is eligible for state funding to help with planning and construction, some of which could come out of the $2 billion voters approved for water infrastructure financing in 2013.

But few are sure the lake will ever be built. Not only would it cost billions of dollars, but the regulatory hurdles are steep. One of the last major reservoirs in Texas to get a state construction permit, Lake Ralph Hall, waited 10 years for the approval.