Lewisville couple aspire to ‘save the planet’ with funky upcycled art 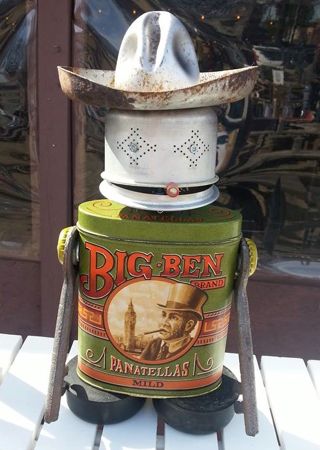 Husband-and-wife team Kelly Collins and Joel Clary collaborate on the design of "JnK-Bots," made from thrift store items, for their online business called Re-Fab Lab.

Kelly Collins and her husband, Joel Clary, love science-fiction, comics and other-worldly experiences. On their honeymoon, they visited Roswell, New Mexico – home of the most notorious alleged UFO sighting.

But the pair is decidedly down to earth when it comes to the art they create – and earth friendly.

The Lewisville couple are the masterminds behind the Re-Fab Lab, an apt descriptor for these two green artists. Collins makes character dolls of recycled and upcycled yarn, while Clary creates "JnK-Bots," whimsical robots made from cigar tins, bottle caps, bolts and other found objects. 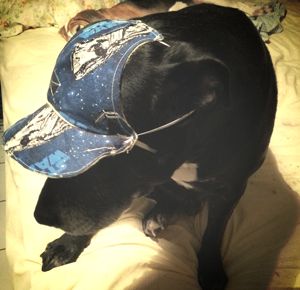 Unleashing their imaginations, they've constructed other unique projects with materials most people might simply throw away.

In 2012, the two turned their hobbies into a business, at the urging of a friend who thought their work would wow craft show goers.

Grim models a Star-Wars themed dog hat made by Collins.

“We decided to try selling our creations and they did really well,” says Collins.

Their first show was Flea Harvey’s in downtown Dallas. The vintage collectibles and art market outside Lee Harvey’s near Old City Park turned out to be a good fit for Re-Fab Lab. 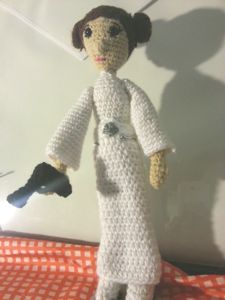 “We work at different shows throughout the year that cater to an audience that appreciates upcycling and unique crafts,” said Collins.

To keep up with demand, Collins focuses on her “amigurumi” creatures, a Japanese style of knitting or crocheting small animals and characters, usually with a spherical head and undersized extremities. Most of her most characters are inspired by pop culture movies and cartoons. Collins often uses found yarn and other materials in the whimsical creatures.

Above, Star Wars Princess Leia knitted by Collins with found yarn. Below, a mariachi bot. 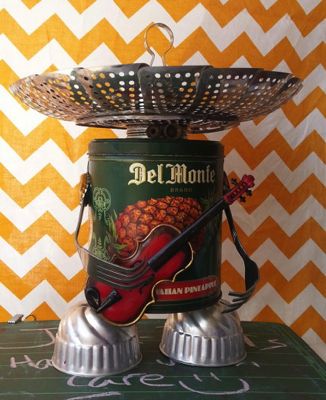 “I hate to throw out something that I know has another purpose. Materials from flea markets, antique stores, thrift stores – even the trash,” she jokes, “can be used to make something fun and different.”

Meanwhile, Clary fabricates and builds their fanciful JnK-Bots after the two talk through designs. The bots have been displayed in galleries in Dallas and are about to make their movie debut.

“About two years ago the set designer of the horror movie Oculus contacted us and they bought three bots,” said Clary. “We didn’t hear anything for three years. We just saw the trailer and there are two bots that are prominently featured in the home of the main character. It made us pretty emotional to see them on screen.”

Currently Re-Fab Lab and Grimspot are side businesses, as Collins attends North Central Texas College in Corinth, working on a degree in database/IT networking, and plans to enter the field as a database administrator. Clary's day job is lab assistant in a pathology lab. The proceeds from their art may not make them wealthy any time soon, but that’s fine with them.

“We really enjoy what we do and it makes us happy when one of our bots or characters gets ‘adopted.’”

They intentionally keep prices reasonable with most items priced around $40-$50.

“We’ve seen other artists putting very high prices on their art and want to be sure anyone can afford fun upcycled art that can be a great addition to their house,” says Collins.

Above, a upcycled yarn version of Mr. T. Below, a gallery of bots.

In life as in art, the pair are committed motivated to stay green. The two recycle, grow a vegetable garden and scour the local resale market.

“We thrift like nobody's business,” said Collins, “Almost everything we own is either from a garage sale or thrift store.”

When they find things that inspire them to make art, it’s a gift – for their patrons and for the planet.

Penelope Taylor is a Dallas-based freelance writer. A native New Yorker, she has called Dallas home for 20 years. Her work has been published in local, regional and national publications, including the Dallas Morning News, Edible DFW, the Texas Jewish Post and others. She is a conscious eater, diligent recycler, composter and an avid but not very accomplished gardener. Penelope is passionate about making a difference to the future of our planet and sharing the myriad ways that people are making a difference today.