Dallas-Fort Worth is not showing the love for solar power that other Texas cities have, according to a report released byEnvironment Texas Research and Policy Center on Feb. 14. To highlight the study, Jennifer Rubiello of Environment Texas, along with representatives from local environmental groups, held a Valentine’s Day press conference in Fort Worth. Rubiello outlined the results, which showed San Antonio and Austin’s municipally owned utilities account for 85 percent of the solar energy installed in Texas. CPS Energy, based in San Antonio, has installed 52.6 megawatts (MW) of solar energy capacity while Austin Energy has added 41.3 MW. Meanwhile Dallas has installed just 1.2 MW and Fort Worth only .9 MW. One megawatt powers between 100-200 homes.

Anna Clark, cofounder of Interfaith Power and Light and founder of EarthPeople; Jim Duncan, owner of North Texas Renewable Energy Incorporated; Michael Martin, executive vice president of business development at Principal Solar; and Aaron Harville, a parent with an asthmatic family, all spoke about the need for the sunny Lone Star State to become a leader in solar energy. They cited solar’s zero-emissions’ output, which peaks on hot summer days when demand is at its highest, as reasons to back the energy development. The technology also does not strain water supplies and can be assembled quickly.

Currently, Texas ranks 13th in the U.S. for solar energy capacity installed, behind New Jersey and Massachusetts. The report recommended Texas increase its solar power by 4,000 MW by 2020 with help from state incentives and revised standards. “It’s time to take solar to the next level,” said Clark. “We need climate friendly policies to encourage those who are not early adopters.”

Read the full report at http://environmenttexas.org/reports/txe/reaching-sun 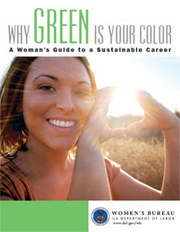 The U.S. Department of Labor’s Women’s Bureau wants more women to go green. The  federal agency has been promoting the interests of working women since it formed in 1920. The organization advocates for equality, economic security and flexible work environments. Today one of its major initiatives is encouraging women to pursue “green careers.”

According to Dolores Bischof, program analyst for the Dallas office which serves a five-state area, many green jobs offer higher-paying salaries and better benefits yet many women overlook them. To help women expand their opportunities, the Woman’s Bureau website offers a green jobs guide, “Why Green Is Your Color: A Woman's Guide to a Sustainable Career,”which includes examples of green careers and how to prepare for them.

Some of the green jobs listed include recycling coordinator, wind turbine technician and landscape architect.  “Many women don’t realize these are things they can do,” Bischof said. “This isn’t for everyone but women are quite able to take over a lot of these jobs.”

Bishchof said she recently partnered with Austin Community College to help recruit women for their solar technology and installation training programs. They used images of a green “Rosie the Riveter” to advertise the courses and enlisted women instructors to teach the classes. As a result, they attracted a 75-percent female enrollment.  “The result was dramatic,” said Shelly Attix of ACC of the turnout. “We felt like we had hit on a magic formula.”