Local environmentalists say they gained ground last week in the Dallas gas drilling debate. After a public hearing on Thursday, the Dallas City Plan Commission postponed voting on whether to allow gas drilling on public parkland until March 21. The commission had already voted against approving drilling permits for the site near the L.B. Houston Sports Complex in December but recently announced they were reconsidering it. However, on Thursday, following a strong showing by anti-gas drilling activists, the commission appeared to lob the issue back in the City Council’s court, asking them to address the city’s current ordinance that prohibits gas drilling in parks or floodplains, before the commission votes on the permits again. “They basically told Mayor Rawlings they needed to clean up their own mess,” said Zac Trahan, director of the Texas Campaign for the Environment’s Dallas office.

In addition, other issues surfaced, including a document showing the city manager promised back in 2008 to help Trinity East gain approval to drill at the site in question. Read more:

A group of North Texans are headed to Washington to attend the Forward on Climate Change Rally planned for President’s Day, Feb. 17. Dallas-based environmental organizer Rita Beving is arranging the bus trip that will take local participants from Dallas to DC. About 30 people have signed up, including activists from Austin, East Texas, Corpus Christie and Houston.

The DC rally, spearheaded by 350.org and the Sierra Club, is predicated to be the largest rally on climate change in U.S. history. According to Beving, the event was inspired by President Obama’s inaugural address in which he promised to act on climate change and urged citizens to let their voices be heard. “It’s inspiring that President Obama said that climate change matters,” said Beving. “We’re going to DC to make sure it’s not just talk.”

The bus leaves Dallas on Feb. 14 and returns on Feb. 18 with two nights in DC. Cost for the trip is $199-$350, depending on accommodation choice. If you’re interested in joining or donating to offset costs, contact Beving at antiquerita@aol.com or 214-557-2271 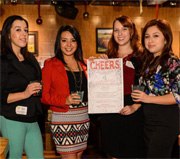 The US Green Building Council’s North Texas chapter wants to give young professionals a head start when it comes to sustainability. A few years ago, USGBC-NT launched North Texas Emerging Professionals, a group geared to those in their 20s and 30s just starting their careers. According to organizer Michelle McEuen, they recently restructured the group and boosted its calendar of activities hoping to attract new members.

McEuen said they have about 75 regular participants at their events, which include community outreach, professional development and networking. Members represent a variety of professions, including architecture, interior design, engineering, finance, graphic design and marketing. “Any sustainability enthusiast is welcome,” McEuen said. “It’s a place to meet like-minded people.” Events planned in the coming months include a public speaking workshop, a visit to Parkland Hospital and a bicycle tour of Dallas breweries.

For more information, contact McEuen at mmceuen@usgbcnorthtexas.org or 214-571-9244. Keep up with them at www.Facebook.com/NorthTexasEmergingProfessionals.