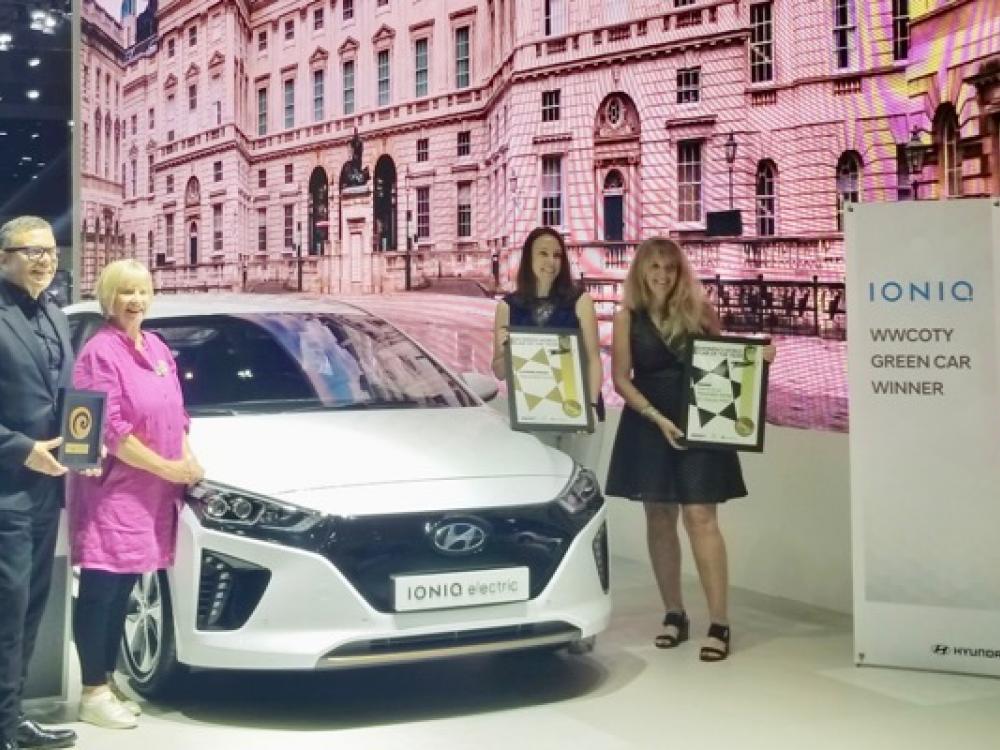 History was made in South Korea when three women motorcar drivers from Women’s World Car of the Year were invited to take part in the 2018 Busan International Motor Show held this summer.

It was the first time that the women’s association had been invited and as a female automotive journalist, I was one of them. As the only juror for the organization from the United States, I took the trip to Seoul along with my colleague from Spain and Women’s World Car of the Year founder Sandy Myhre from New Zealand.

We presented Kia Motor executives with three awards named by the global women’s group including the Green Car of the Year award for the Hyundai Ioniq. The car also won the Supreme Award.

One of three president-level executives at Kia Motors and head of global design strategy for both Hyundai and Kia brands, Peter Schreyer was on hand to receive the Green award. During my in-depth interview with him, he talked about the eco-friendly cars available today and how the look and feel of these cars will be changing in the future.

“I think there are different philosophies,” he said. “I don’t want to present a dogma because when you do an electric car you have different requirements. For example, you don’t need such a big opening for putting in fuel so automatically the car looks different. In some ways we have a bit more freedom with an electric especially if it’s planned as only being electric. You can have a different layout, a different package, if you don’t have a combustion engine, exhaust pipes and so on all goes away so passenger seats can be done differently.”

However, Schreyer said because some cars like the Ioniq are available with three different power options - electric, plug-in hybrid and hybrid - you still have the outline of a combustion engine car.

“It is nice as a designer to have the freedom to design an eco-friendly car or only an electric car to separate the design and make it special. On the other hand, I think our target in the future must be that all cars are eco-friendly or getting eco-friendlier, this is our vision and what we need to do – and all cars have to look different, so we have to make progress in design.”

Schreyer said he also does not think car manufacturers should separate the design of an eco-friendly vehicle versus the more traditional.

“We should all together have a big effort to improve fuel consumption because I think the internal combustion engine is not going away so soon,” he added.

While he said there is indeed, a different philosophy when it comes to green automobiles, he said too that should not mean boring since “there is a constant flow of trends coming from society these days.”

Many believe Schreyer is one of the most influential car designers in the world and he pointed out he was particularly happy about the award our women’s group presented.

“I think this is very nice because we are not only making cars for men, but for everyone.”

He added that women needed to be more involved in the design of today’s cars. And that electric cars needed to be designed to appeal to the general population.

Indeed, the Ioniq has already proven its worth in the global market and it seems the philosophy from the Hyundai and Kia team in Korea is that as a manufacturer, Hyundai is committed to an ecological range with an emphasis on the different propulsion systems. To that end the manufacturer has already shown with the Ioniq and the Kona Electric that it is willing to takes further steps with hydrogen-powered vehicles to improve the eco-friendly philosophy all around.

“At the moment, there is a big change going on in the whole industry which has to do with the necessity of change, more eco-friendly cars and products, but also with the new technologies that are coming up that allow different ways of approaching driving, autonomous and intelligence, and [the] changing of society.”