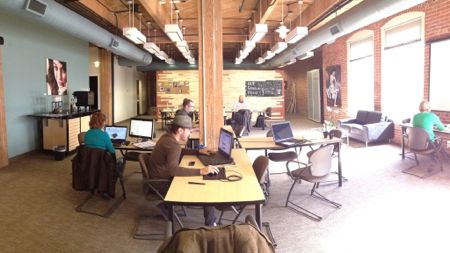 The Grove in Dallas' historic West End district is one of nearly a dozen coworking spaces that have sprouted up in North Texas.

Coworking spaces are popping up worldwide and North Texans looking to ditch their homes offices for shared office space will find them across the Metroplex.

An informal internet search brought up 10 coworking spaces operating or starting up in Dallas-Fort Worth. They're aimed at entrepreneurs, nonprofits and freelancers who are weary of the isolation of working at home and relying on coffee bars for meeting places.

In Dallas, the Common Desk, the Connective Hub, Weld and Spryrocket offer a diverse group of coworking spaces. Up in Farmers Branch, there's Dallas CoWork. In Carrollton, there's the tech-oriented Dallas Makerspace. In Tarrant County, CoLab and the BackLot can be found in the trendy Seventh Street district in Fort Worth. Meanwhile, Cowork Denton is gathering funds to start the first coworking space in Denton with an Indiegogo campaign.

Justin Nygren, coowner of the Grove coworking space in the historic West End in Dallas, said it’s a more sustainable way to work.

“Coworking is based on resource sharing,” said Nygren, who has a background in community organizing. “You minimize the impact of individual businesses on the environment. Instead of 60 businesses taking up 60 office spaces and using AC and lighting, they’re using one shared space.”

At the Grove, like most coworking spaces, members share meeting rooms, copiers, white boards and kitchens. They pay monthly rates that vary from $75 to $850 depending on how much space they need and how often they need it. While some rent a desk for just a few days per month, others opt for private offices.

Social Media Sync is an ongoing meetup held at the Grove in Dallas.

Amy King is a creative consultant with a focus on sustainability who’s operated her business Nested Strategies at the Grove since it opened in September last year. Since then, she’s recruited several members of the Dallas green community to join, including Anna Clark, founder of EarthPeople Media; Tony Robinson, a Dallas-based sustainability consultant; and Tamar Wilner, a writer for the Environmental Leader.

“I pretty much recruited my favorite sustainability consultant people for the Grove so we could see more of each other and collaborate whenever possible,” said King.

King said she’s hoping that they will influence others, including some of the 60 businesses who have set up offices at the Grove.

“I feel like we’re just starting the conversation about how we can incubate more sustainable businesses in Dallas-Fort Worth,” she said. 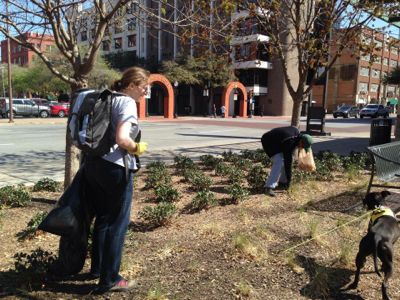 While some local coworking spaces focus on the creative or tech fields, the Grove is intentionally diverse when it comes to professions. However, its theme is social enterprise with Nygren screening for people who want to make a positive impact on the community.

“We encourage entrepreneurs to not only do good business but also do good with their business,” said Nygren.

They’ve already partnered with the Dallas chapter of The United Way in training the non­profits enrolled in their GroundFloor program in social media strategies. They are also working with Downtown Dallas Inc in their mission for revitalizing the Downtown community.

Grove members volunteer for a clean up day. Below, Holiday food drive. 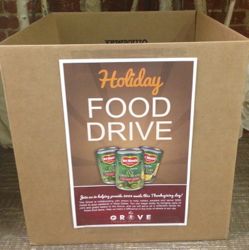 As part of its green policies, the Grove offers discounts on DART passes, a shared bike program and office recycling.

An avid public transportation user himself, Nygren said he gave up his car last November.

This year, the Grove is increasing the size of its space with plans to take up the whole fourth floor of the building, up to 15,000 square feet. Its Indiegogo campaign, which closes this week, has raised nearly $10,000 of their $40,000 goal. Because they’re running a flexible campaign, they’ll be able to keep their donations – minus a higher fee – even if they don't make their goal.

Nygren said coworking is a good fit for a new generation that is looking for purpose and meaning as much as profit.

“It took the economic collapse for people to understand the value of coworking,” said Nygren. “It’s an idea whose time has come.”