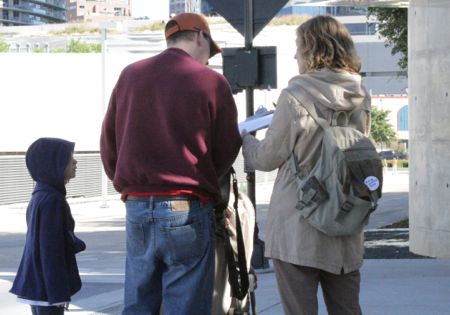 The Texas Action Coalition for the Environment is gathering signatures on a petition to request that the Perot Museum add information regarding the hazards of fracking to its energy exhibit.

There is a dispute about the facts of hydraulic fracking at the Tom Hunt Energy Hall exhibit at Perot Museum, and the Texas Action Coalition for the Environment plans to do something about it.

Katie Shea, a lead member of the Dallas-based Texas Action Coalition for the Environment, says that after the group visited the Perot Museum’s hydraulic fracking exhibit, they were appalled by what they perceive as a bias towards fracking. 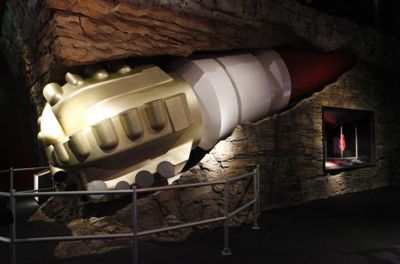 At the Tom Hunt Energy Hall – funded by a $10 million gift from Dallas-based Hunt Petroleum Corp and named for the company’s late chairman – visitors will find shale gas extraction shown prominently and in great detail. However, despite the controversy involving the process, fracking is portrayed as benign, reported Dallas Morning News environmental writer Randy Loftis, just before it opened in December 2012.

“The energy hall’s first and most prominent message could be put as: Fracking is fun,” wrote Loftis.

Since then, others, including Mother Jones magazine, have chimed in as they’ve reviewed the exhibit for themselves.

Above, a giant drill bit in the Tom Hunt Energy Hall. Photo courtesy of the Dallas Morning News. Below, the exhibit's Shale Voyager provides a virtual experience of the process of hydraulic fracturing. Courtesy of LiveDesignOnline. 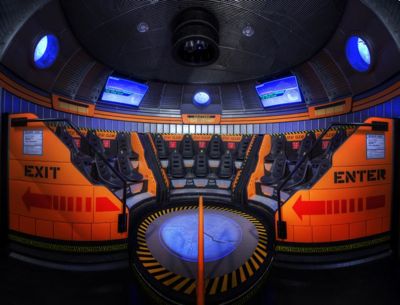 “The exhibit paints the picture that fracking is a harmless act, when in reality it has a lot of side effects that are not portrayed,” Shea laments. “It should include details about chemical use and definitely how it relates to climate change and the environment.

Shea said they want them to list all chemicals used in fracking and how the process can affect the environment.

“A lot of details are left out, and we want them more honestly portrayed.”

The Fort Worth Museum of Science and History received similiar criticism from local environmentalists for its XTO Energy Gallery, which opened in 2009.

The Texas Action Coalition for the Environment said they want to unite Texans to confront the causes of environmental destruction and pollution such as gas drilling through community organizing and non-violent direct action.

Since organizing about one and one-half years ago, the Texas Action Coalition for the Environment has worked with like-minded groups, participating in such events as canvassing for the Seaway Pipeline, demonstrating with the North Texas Light Brigade and protesting at the Exxon Mobile Oil Building on the anniversary of Mayflower Spill in Arkansas. 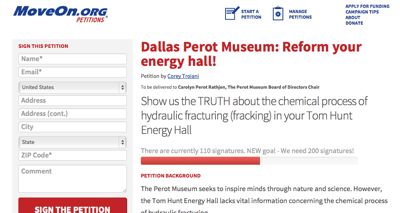 Members of the organization have solicited less than 1,000 signatures on both paper and online petitions to be presented to Carolyn Perot Rathjen, board of directors chair for the Perot Museum, but strive to acquire 2,500 by the end of 2014. The group hopes to persuade the Perot Museum to add to the exhibit, so that a more honest portrayal of hydraulic fracking will be presented.

Becky Mayad, public relations person for Perot Museum, says that as a science-based institution, the Perot Museum presents science facts on a variety of topics, and its goal is not to take sides but rather provide unbiased information that educates, provokes thought, and inspires minds.

“We know that this process often sparks discussions and differing perspectives, and we welcome that within a productive environment,” said Mayad.

Most signatures have been obtained by members standing in front of the museum every Sunday, asking people if they would like to sign the petition. It is the organization’s hope to enlist the help of other environmental organizations such as the Sierra Club.

“When all signatures are gathered, we plan for a group of members to make an appointment with Perot Museum board of director chair Carolyn Perot Rathjen and plead our case,” says Shea.

“We think that the general public should know all the facts. The museum is there to educate people and if the truth is not there, it is a disservice to the public.”

Minnie Payne is a Carrollton-based freelance writer. She’s written for Pegasus News, Frisco Style Magazine and Seedstock. She presently freelances for Living Magazine, The Senior Voice and Your Speakeasy. She can be reached at jdpmap@verizon.net.