Green Source DFW at the Sustainability Showcase in Dallas: Day 1 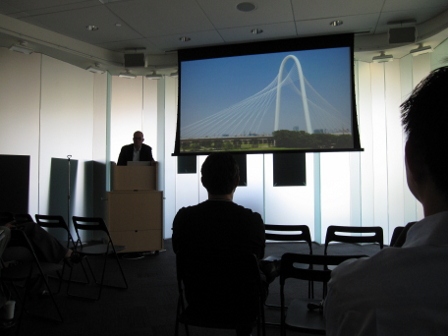 Recognize the bridge? Some called it a bridge to nowhere. Brent Brown, speaking at the 2011 North Texas Sustainability Conferece, is one of the people trying to change that with more sustainable design

Sustainability Conference: Day 1
Day 1 of the 2011 North Texas Sustainability Showcase is over. A day that began with stunningly brilliant views of downtown from the 17th floor of the conference's Uptown home (check out some of the photos.) left me with quite a few insights at its end.  There were many different sessions and these were the ones that Green Source attended.

1:00pm – Brent Brown of City Design Studio – The Vision
First up for the Green Source team came Brent Brown of City Design studio, talking about his department’s vision for West Dallas and, really, for the entire future of development in Dallas. It was a promising presentation, marked notably in its early goings by a slide that removed the trinity as a barrier between north and south (a visual sleight of hand that really pressed home the dividing role that we allow the river to play in our city) and by the striking mention of the lack of neighborhood parks in the otherwise successful story of Uptown’s urban development. The main thrust of the presentation was the different-from-usual (and more sustainable!) process of development practiced by The City Design Studio in drawing up its West Dallas "plan" (you can see the full presentation online here).

The involvement of local neighborhood groups and stakeholders from day 1, with 40 meetings before the first public meeting, can all be taken as all good signs for anyone concerned about gentrification as a necessary counterpart to development in Dallas.

2:00pm – Kevin Sloan – Intersections
Wholly unlike what I imagined, this next presentation had nothing to do with traffic patterns or road construction. Instead, it was an almost philosophical discussion of Kevin Sloan’s concepts of the “charismatic web”. I took this to be idea of the city as a web with character. The nature of this character can be viewed as a portrait of various features, among them density. The main takeaway was the portrayal of the modern southern city, with vast sprawl and densities of at most 1 person per square mile, as a thing never before seen in human history. This is because while everyone talks about density, the simple fact of the math is that to see the kind of density seen in San Francisco the DFW area would have to have a population more than 5 times its current count. For Sloan, this unique problem requires innovative solutions. Whether looking past the “Anglican aesthetic” that leaves many attempting to transform lawns on the same latitude as Baghdad into recreations of the green grass of Irish lore, the innovation required may be a daunting challenge.

3:00pm – LEED Project Case Studies
Let me just say – I never had a clue how much went into LEED certification…not a clue. I won’t pretend to have fully understood the implications of every detail. Suffice it to say this was a presentation on several different LEED certified projects in and around North Texas, with one in D.C. If you’re interested I suggest looking up the Environmental Education Center in Plano, the Hoggatt Whatley Agricultural Complex, the UNT Stadium, and the USGBC Headquarters in D.C. What amazed me about the whole discussion was how so much of it seemed basic to how we imagine architects to think. This is the idea that architects consider local materials and the health of the environment around them when working. It’s quite something to imagine that we’d come so far from the basics… 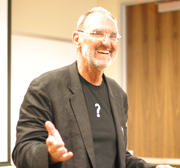 5:00pm – Thom Mayne – The Energy Landscape
The day ended for us with a presentation by Thom Maine on the energy landscape. This lecture deserves its own article. You can check out one of his previous lectures here and I’m sure the folks in charge of the conference will get a vid up soon. Suffice to say, the main driver of Mayne’s architectural philosophy seems to be that architects can influence the behavior of those who use and witness the space. This is the idea that architects can not only influence but have a responsibility to influence the use of energy and space to positively impact human lives. I guess this was the biggest takeaway for the Green Source team for the day – the idea that true sustainability not only involves sustainable use of energy, but sustainable, healthy, and good lifestyles influenced by the design of the places we live, play, and work in. Who’s got a certification for that?

The Green Council (USGBC North Texas Chapter), the CSI (Construction Sprecification Institute) Dallas Chapter, and Dallas AIA’s (American Institute of  Architects) Committee on the Environment have joined together to host this showcase of the latest green building products, technologies and knowledge for commercial and residential use.