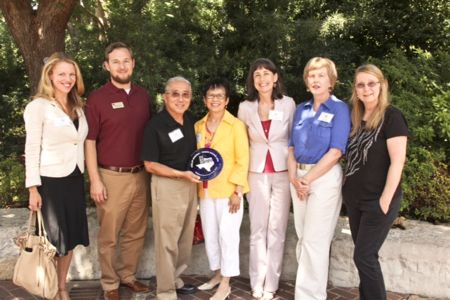 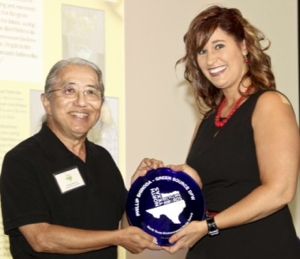 In 2011, as Director of the Environment at the Memnosyne Institute, Shinoda developed the Green Source DFW website to connect the diverse groups interested in green living and advance the environmental movement in the Dallas-Fort Worth area.

Here are some of the other honorees at the event:

Headwaters Construction Materials won the ‘Closing the Loop’ award for re-using waste, reducing raw materials and recycling byproducts. As a result of a concerted effort, they have reduced the amount of cement used in their concrete masonry blocks by 5-15 percent. They are also reclaiming 2-10 percent of the post-industrial waste and are averaging about 2 percent on recycling post-consumer waste.

The city of Keller won the Distinguished Greenscape Project award for launching a leaf and yard waste composting program. The city now now collects residential yard waste, composts it and re-uses it within city parks and facilities. The initial collection diverted 88 tons of material from the landfill and saved more than $1,700 in the city’s mulch expenses. 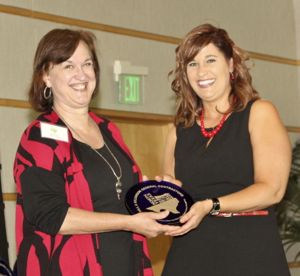 The winner of the Construction and Demolition Debris Reuse/Recycling award went to Hill and Wilkinson General Contractors. While building a new medical facility in Plano, they diverted 87 percent of their C&D debris from the landfill despite a very short six-month schedule for completion.

Left, Hill and Wilkinson General Contractors was honored for diverting 87 percent of their construction and demolition debris from the landfill.

Outstanding Integrated Solid Waste Management Program award went to Frito Lay – Irving Division for its efforts to reach their “zero landfill” goal. A ZLF Team was chartered to change the behavior patterns of nearly 600 employees. One of the initiatives was a quarterly “Waste Awareness Wednesdays,” which involved inviting vendors to discuss opportunities to reduce waste. The facility continues to host annual environmental events, including personal paper shredding day, an electronic waste round-up and the annual “Clean Sweep” of the facility. 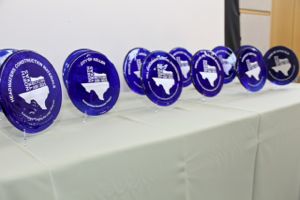 The Composting Program award went to Compost Denton. Last year, Compost Denton launched a municipal compost service to compost food scraps and yard waste generated by residents and small businesses. Their goals include: donating compost to local farms and gardens, providing compost bins and education materials to new participants and conducting public outreach at the Denton Community Market, where they also pick up compostable waste. They have developed tools to help monitor the compost piles remotely, track participation and collection weights by areas and developed an online application.

The Environmental Youth Education & Outreach award went to the city of Little Elm. The city partnered with Little Elm ISD to create a program called “Going Green.” Together, they developed programs aimed at students and the public to encourage recycling. In addition to placing recycling containers at City Park, they implemented recycling at their football stadium and created a demonstration video for attendees. This program has reached an estimated 50,000 ball game visitors a year and up to 30,000 visitors to Little Elm parks. 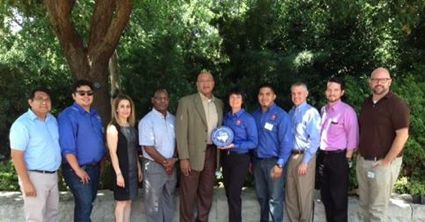 The Environmental and Public Education & Outreach Program award was given to the city of Dallas' Cease the Grease team. The ‘Cease the Grease’ program was initiated to reduce the number of fats, oils and grease (FOG) blockages in the city’s sanitary sewer lines. Since the program’s start, DWU has reduced FOG blockages by 96 percent. In addition, Dallas Water Utilities is now injecting residential FOG into its anaerobic digesters at their Southside Wastewater Treatment Plant. The electricity generated as a result is used to reduce energy cost to treat the city’s wastewater. Additionally, the city has saved an average of $40,000 per year on avoided FOG-related costs.

The North Texas Environmental Elected Official honor went to Judge John Payton of Collin County, who requires youth in trouble for truancy to do community service instead of jail time. This service is aimed at cleaning-up the environment by diverting 70-80 percent of the clean-up materials from the landfill. They also help in the city of Allen community garden.

Above, the city of Dallas' Cease the Grease team. Below, Joan Meeks and the Commodity Recycling team. 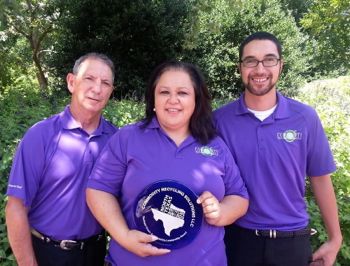 The Rachel Green Sustainability Leadership award went to Commodity Recycling founder Joan Meeks. Conscientious about energy usage at her business, Meeks chose a location with skylights that allows them to conduct business under natural lighting, using artificial lighting for only 5 percent of the day. All furniture for offices and warehouse processing have been obtained through reuse. In addition, CRS generates less than 5 percent of waste from all the items processed through their facility.

The Recycling Special Event award went to Fort Worth Code Compliance Solid Waste Service.The department launched Fort Worth’s America Recycles Day 9 years ago and the event has grown from a shred and recycle day into a venue for recycling hard to recycle items. Through partnerships with Bridgestone, Goodwill, Environmental Collection and Lighting Resources, and 40 volunteers, more than 48,000 lbs of shredded paper, 300 tires, 1,456 light bulbs and 2,000 lbs of batteries were collected for recycling at last year’s event. 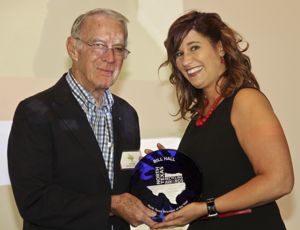 The Volunteer of the Year award was given to Bill Hall of Fort Worth, a master gardener and master composter. For the master gardener program, Hall is required to complete 70 volunteers hours, but his first year, he completed 625 volunteer hours. He volunteers for the Friends of Tandy Hills “Kids on the Prairie” program, helps out at the Fort Worth Southwest Regional Library’s xeriscaped demonstration garden and serves on the “Green Team” during the Fort Worth Symphony Orchestra’s Concert in the Garden series. Hall also recruits five out of 30 attendees for the city’s composting courses.

Above, Volunteer of the Year winner Bill Hall of Fort Worth accepts award.