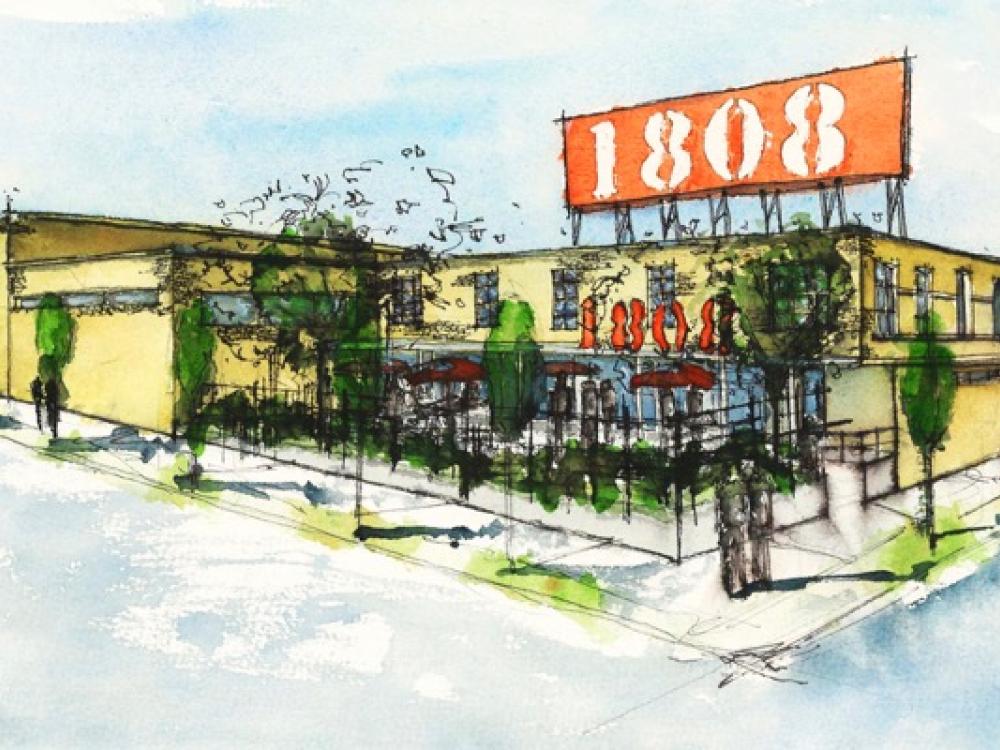 GoodWork is a new coworking space under construction at 1808 S. Good Latimer Expressway in Dallas. Rendering by GGO Architects.

A new coworking space in Dallas is in the works that aims to be the greenest flexible work space in North Texas.

GoodWork, the brainchild of Amy King, a Dallas-based creative consultant, and Steve Kinder, founder of LOFTwall, is set to open late 2017 at 1808 S. Good Latimer Expressway in Dallas.

King said the seed of inspiration for GoodWork was planted when she was working for the U.S. Green Building Council in Washington, D.C. She was assigned to start a leadership development program and was looking for an off-site location to host brainstorming events. She learned about a company, now called the Impact Hub, which has coworking spaces around the world. The creative concept of the Hub, as they then called it, dovetailed with her love of community building.

“I knew from that moment, I wanted to open my own coworking space,” said King.

When she moved to Dallas in 2012, she launched Nested Strategies, a branding firm, and the next year became a member of the Grove coworking space in the historic West End district. 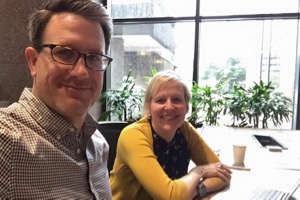 Her first client was Steve Kinder, founder of LOFTwall, a company that manufactures room dividers and privacy partitions for commercial and residential spaces. The two shared a common flexible workplace vision.

“I kept saying to him ‘Wouldn’t it be great if we had our own coworking space someday?’”

A LEED Green Associate, King’s other passion is healthy, green living. She shares her love for eco-friendly design with her fiance and longtime green architect Gary Olp, principal of GGO Architects.

Out of the trio's synergy came the idea to launch a coworking community that emphasized environmental and personal health. Kinder, who King describes as a serial entrepreneur, purchased the 60,000 square-foot warehouse and they enlisted Olp to oversee a LEED-based renovation. While part of the building will be turned into 11 residential units and a coffee shop, GoodWork’s 15,000 square-foot portion will feature flexible open work areas, as well as dedicated spaces from 100 to 2,500 square feet. 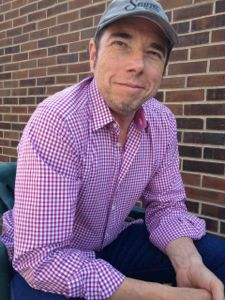 For the renovation, Olp gutted the building and is doing his green magic to it - adding windows, skylights and a landscaped interior courtyard as well as street-side green spaces. As a result, the building will be flooded with natural light, natural materials and views of native trees and plants.

Gary Olp is overseeing the green renovation of the GoodWork building. Courtesy of GGO Architects.

“One of Gary’s signature design features is blurring the line between indoors and outdoors,” said King.

Olp has also added a sophisticated lighting system that mimics the fading daylight so that the artificial lighting doesn’t jar tenants’ circadian systems.

“It reduces stress on our eyes and promotes emotional well being,” said Olp.

Raw concrete floors, reclaimed wood from the old interior, low VOC materials and a state-of-the-art heating and cooling system are also part of the finish out.

In addition, health and wellness are intricately interwined in GoodWork’s design. Exercise is encouraged with easy access to stairs and a fitness center. 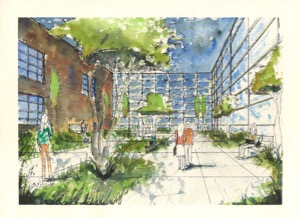 King said she will also be promoting a health-oriented culture by encouraging clients to take frequent brakes, use standing desks, hold walking meetings and bike to the nearby Dallas Farmers Market.

“If the people are taking care of themselves, they do better work.”

A roofless interior courtyard will be landscaped with native Texas trees and plants. Rendering by GGO Architects.

GoodWork will not be far from where her former coworking office sits but King doesn't worry about creating a surplus. She speculates that more people are working remotely and the need for coworking space is growing. She is simply following her bliss.

“Being able to help people’s creativity and combine all of my skills with sustainability and green building, it’s like my dream come true.”