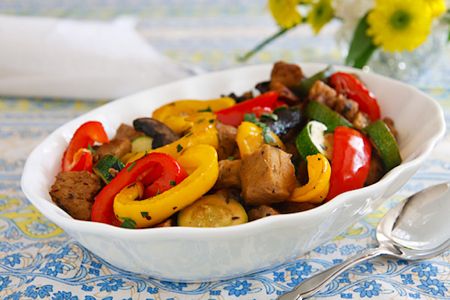 Above, roasted seitan, peppers and portabellas is a holiday dish recommended in Vegan Holiday Kitchen by Nava Atlas. See recipe.

If you’re looking for a way to lighten your environmental footprint, look no further than your diet. While many people opt for a planted-based diet due to ethical or health reasons, many environmentalists are turning vegan or vegetarian in the name of sustainability.

A 2010 United Nations report said a global shift towards a vegan diet is critical to mitigating the global issues of hunger, fuel poverty and the worst impacts of climate change.

So why not try cooking up a vegetarian meal for your family and friends for a truly "green" holiday this year? Two local veg experts have shared their vegetarian approach to festive meals.

Laura Slayton is the proprietor of Laura's Natural Kitchen, a plant-based cooking school. She said going vegetarian during the holidays will make you feel good.

“There’s so many more vital nutrients in plant-based foods than animal-based foods,” said Slayton, a former cooking/nutrition coach for the Virginia Piper Cancer Center in Scottsdale, Ariz. “You'll be energized instead of lying around feeling stuffed.” 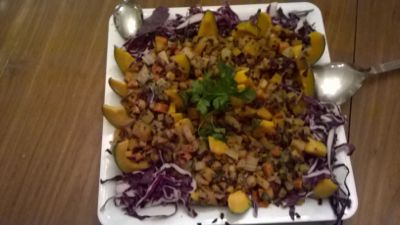 Slayton said one of her favorite centerpiece dishes is kabocha squash cut in half and roasted in the oven for about 20 minutes in a glass pan. She adds a chickpea pilaf on top, made with black rice, seasoned with cinnamon and pumpkin spice.

“The black rice is actually purple,” she said. “It’s very nutty and has some of the same beneficial properties as blueberries. It makes a beautiful presentation.”

For Christmas she suggests a lentil loaf with vegan mushroom gravy. And for New Year’s she likes to do a black-eyed pea kale soup. 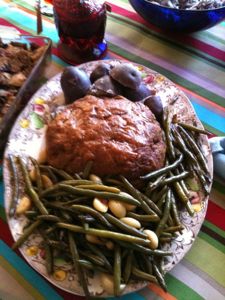 Carol Adams is the Richardson-based author of Never Too Late To Go Vegan. The book includes a variety of festive food recipes, including a baked yam casserole and a “Neatloaf,” featuring oats, brown rice, walnuts and mushrooms.

For years, her go-to holiday meal was a tofurky recipe but she’s had fun with trying new fare.

“When my boys got tired of tofurky, we started making ravioli. One year we had a Chinese Thanksgiving.”

Another standby is a seitan roast for the Thanksgiving centerpiece. She recommended Field Roast, which makes a variety of grain-based roasts, including a hazelnut cranberry roast en croute.

The main dish gets center stage on the table but for many, the side dishes are what Thanksgiving is all about, said Adams.

“It’s the squash, the potatoes, how you did the green beans,” she said. “It’s so easy to have fun with sides, they become the main dishes.”

Never Too Late to Go Vegan offers vegan versions of bread stuffing as well as mashed potatoes with vegan gravy, made with flour, sautéed mushroom, onion and soy sauce.

Adams said one of her secret holiday cooking tips is using Pepperidge Farms puffed pastry to make dishes that draw oohs and ahs.

“People want something that looks fancy. Take two veggies you love, say roasted squash and mushrooms. Put curry on top of the squash and cover it with puffed pastry.” 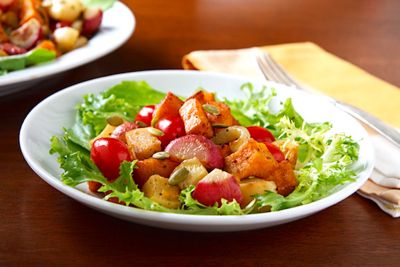 When it comes to vegetables, she said simplicity is key. Just roast or steam them without oil, margarine or heavy cream. Let the flavor of the vegetables come out and enjoy nature’s abundance.

“Think about presentation and all these colors that nature has laid out for us,” she said.

For mashed potatoes, Slayton likes adding steamed cauliflower – about a 50-50 ratio – to yukon and red potatoes, seasoned with garlic, salt and pepper.

“You don’t need butter or oil, the cauliflower added the creaminess.”

For a quick and easy side dish, She recommends tossing raw carrots and beets – shredded or sliced – with an orange zest and ginger.

“It makes a great refreshing salad.” 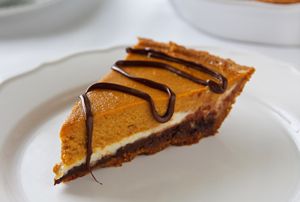 A pumpkin cheesecake from Vegan Holiday Kitchen with a hint of chocolate. See recipe.

She added that she’s served this dessert and guests were none the wiser that it was vegan. 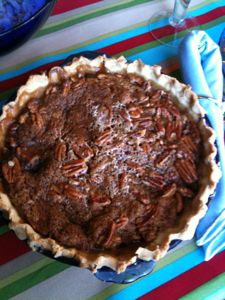 Adams shared her vegan pecan pie recipe. She also recommended a book by Nava Atlas called Vegan Holiday Kitchen, which features more than 200 recipes, including a pumpkin cheesecake recipe with a hint of chocolate.

Adams said the main thing to remember during the holidays: it’s okay to experiment.

“We fall into the trap of thinking it’s the food that creates the experience of the holiday. It’s not the food, it’s the fellowship of family and friends. We don’t have to be bound by the decisions our grandfathers and grandmothers made many years ago.”