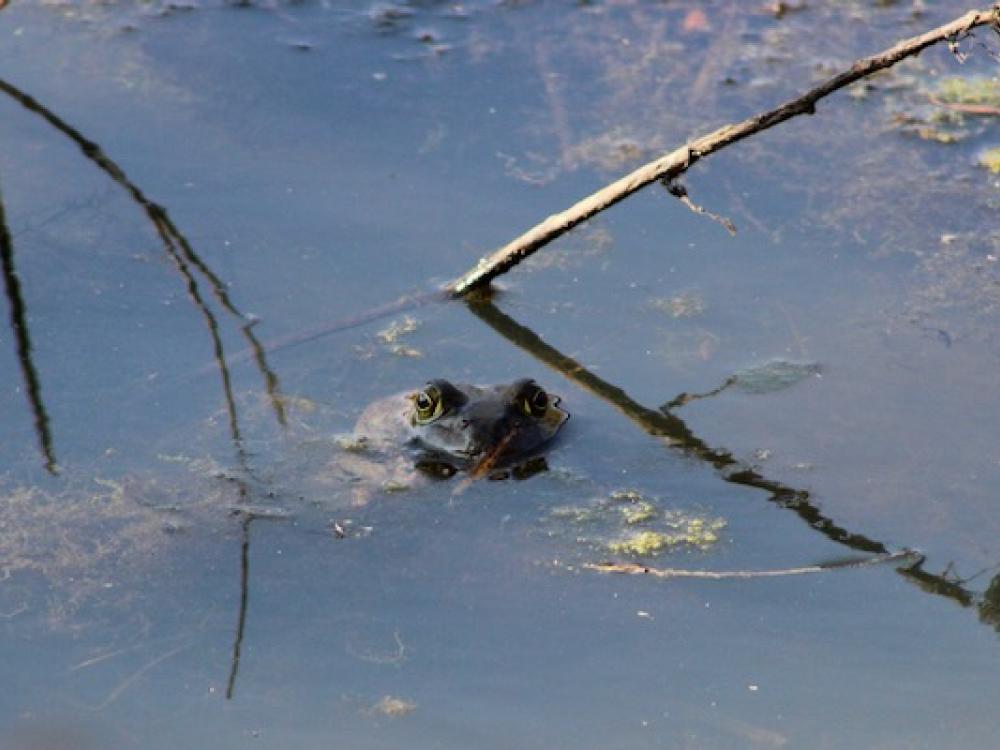 An American bullfrog at the Southwest Nature Preserve. Photo by Michael Smith.

Their calls come out of the darkness. The pond springs to life with a magical voice.

It sounds high and sharp like two pebbles knocked together. Somewhere in the shallow water, male Blanchard’s cricket frogs use their throats to make this call. Each “grick” inflating the balloon-like skin under their throats for a resonant moment. 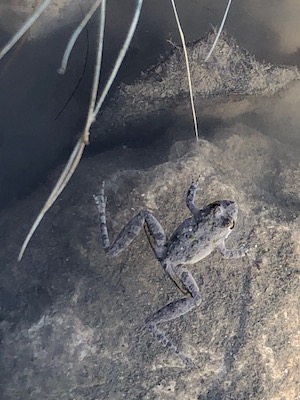 A cricket frog floats in a creek in west Fort Worth. Photo by Michael Smith.

And then there's a lower voice, a stuttering “chuck-chuck-chuck-chuck,” followed by a sound like two balloons rubbing together or like an extended burp. These were Southern leopard frogs, males calling out to females. It’s the frog version of the courtship behavior used by male birds to impress females.

On a recent evening visit to Southwest Nature Preserve in Arlington, the frog calls could be heard across the ponds and woodlands, even over the nearby traffic noise. It was March 20, the first day of spring and World Frog Day as well. What better day to stand in the darkness and listen to this strange and lovely chorus.

"Frogs do for the night what birds do for the day: They give it a voice,” said renowned herpetologist Archie Carr. “And the voice is a varied and stirring one that ought to be better known." 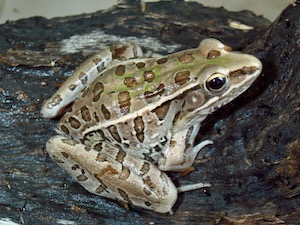 In a Texas Parks & Wildlife Department newsletter in 2013, Lee Ann Johnson Linam recalled that quote in an article. She grouped Texas frogs and toads according to the way their calls sounded, like “moaners” (many toad species), “trillers” (like the gray treefrog), and so on. With practice, we can identify many frogs and toads by their calls, just as we can identify the call of a cardinal or a meadowlark.

In gardens, parks and preserves around Dallas and Fort Worth, on spring nights we might hear the calls of many species of frogs and toads. There are 21 species that have been found in Tarrant and Dallas Counties, but many of those are found only in certain habitats. Some have declined in the Metroplex so that they show up rarely or not at all.

The nature tracking app iNaturalist is a good way to estimate what you might find in your location. A social media platform for nature nerds like me, iNaturalist allows anyone to post observations of things they have found. After you create an account, you can upload smartphone photos and add information about where you found it. If you can’t ID what you’ve seen, experts will do that for you. The data is then available for scientists and conservationists to use. 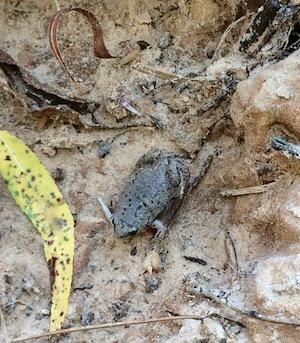 A Great Plains narrow-mouthed toad in Wise County. The narrow-mouthed "toad" is actually a small kind of frog. They sometimes share dens with tarantulas. Photo by Michael Smith.

What’s the difference between a frog and a toad? Typical toads have dry, warty skin and shorter back legs for hopping, while typical frogs have smooth, slimy skin and long back legs for leaping. However, there are all kinds of exceptions. For example, the narrow-mouthed “toad” is really a small kind of frog with smooth skin and small back legs.

Yes, the narrow-mouthed toad has a sort of narrow mouth on a little head. It is sometimes found sharing a burrow with a tarantula, where it presumably enjoys the moist darkness and the protection that comes from having a tarantula as a roommate. The spider seems to benefit because the little frog eats small insects that could harm the spider’s eggs. 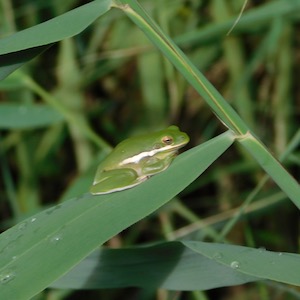 A green tree frog spotted at the Fort Worth Nature Center. Photo by Michael Smith.

The best time to hear frog calls is spring, when temperatures are warming and the rain comes, creating temporary ponds and filling roadside ditches. Most frogs and toads lay their eggs in water. Unless the pond is created by flooding from a nearby creek or river, a temporary pond doesn’t have fish in it. Lots of fish will eat frog eggs, so an “ephemeral” pond – one of those temporary ones – is where you often find frogs and toads breeding.

Their eggs are fertilized externally by the male frog or toad. For example, imagine a Gulf Coast toad singing his heart out at the edge of a little pond, a trill lasting several seconds and described as like a wooden ratchet being turned. Charmed by this lovely tune, a female arrives, and the male climbs onto her back in a way we might describe as “piggy-back” but is scientifically termed “amplexus.” In this position, as the female lays a string of eggs in the water, he can fertilize them as they are laid.

Within a few days, these clear, gelatinous eggs hatch into tiny dark tadpoles. These tadpoles feed on algae and decaying matter, growing quickly. If the pond is evaporating, they have to grow and transform into air-breathing toads before the water is gone.

As the tadpole grows, tiny buds appear at the base of the tail, and those will become back legs. An incredible transformation occurs, as breathing with gills will have to change to breathing air with lungs. A small mouth for scraping becomes bigger jaws and a tongue for catching insects. The whole gut must change from a plant-based to an animal-based diet. The tail shortens and is absorbed.

Woodhouse's toads were once more common in North Texas. Photo by Michael Smith.

Many of our local frogs and toads seem to be doing pretty well, but in many places, they are declining or disappearing. Some of this is because of a fungal disease known as “chytrid” that attacks frogs’ delicate skin. In places, pollution and pesticides are a culprit, and the loss of wetlands is a big factor. Climate change is part of the problem as well, especially as it alters rainfall patterns. This is a worldwide problem, and the University of California’s AmphibiaWeb site states that in “the last two decades there have been an alarming number of extinctions.” 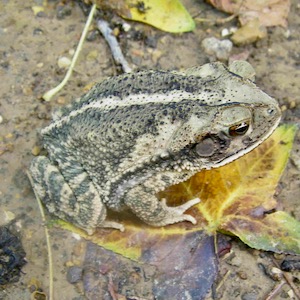 A Gulf Coast toad. The species has adapted and thrived in DFW. Photo by Michael Smith.

In the 1960s, I remember that Woodhouse’s Toads were common in the flower beds and under the street lights in our neighborhood, snapping up June beetles and other insects drawn to the light. The Gulf Coast Toad, a less-spotted, two-toned dark and light-colored toad, seemed exotic and unusual. Over the years, the more adaptable Gulf Coast Toad survived and thrived in the Metroplex, while the Woodhouse’s toad mostly disappeared here and in many places in Texas where it used to be found. 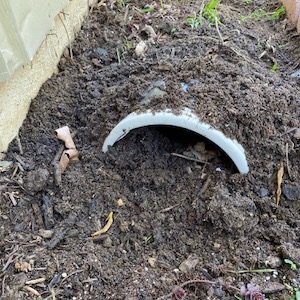 Use a half-buried clay pot to create a frog house. Photo by Michael Smith.

What can you do to help frogs and toads? The first thing is to protect the places where they live, including the creeks and ponds in your neighborhood as well as the bigger wild places in parks and preserves. You can do your part to stop climate change.

In your own backyard, you can limit your use of pesticides and keep gardens and flowerbeds mulched and watered. You can create little “toad houses” using big clay pots, half-buried to create little caves. If the exposed part of the pot is covered with soil and leaf litter, and the whole thing kept moist and cool through the summer, a toad may take up residence there.

The benefits of having frogs and toads in your yard is that they are little insect-eating fanatics, so perhaps you would have less need for pesticides. And after the rains come, your spring and summer nights may have the songs of these wonderful amphibians.

For a book with beautiful photos of our frogs and toads, and an audio CD of their calls, get The Frogs & Toads of North America.

For a fascinating account of the declines of these amphibians, read In Search of Lost Frogs.

A good field guide to the amphibians of our state is Texas Amphibians: A Field Guide