Texas is known as the leading oil and gas producer in the U.S. as well the largest emitter of greenhouse gases. But a company in Fort Worth says it has invented a green oil product that could reduce emissions all over the world.

Gary Graham, vice president and head of product development at Go Green Smokeless Oil International, reports that the company is the first to market a green motor oil. 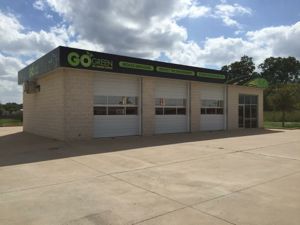 The smokeless motor oil is 100 percent synthetic, nontoxic and biodegradable. In addition, the company announced it’s launching an environmentally friendly lube center in Austin this month.

Some folks in the Metroplex are already benefiting from Go Green’s new product. Local customers include the Dallas Zoo, Highland Park DPS and NASCAR.

“[NASCAR] is realizing the benefits of alternative lubricants, which include more horsepower and less wear,” Graham adds.

The folks at Go Green Smokeless Oil International say they invented the green oil for a few reasons.

“There were different motivations for different products, but all with the intention of easing the burden on our environment via reducing emissions, lowering the life cycle analysis (LCA) or helping Mother Nature speed up the natural biodegradation process,” Graham said. 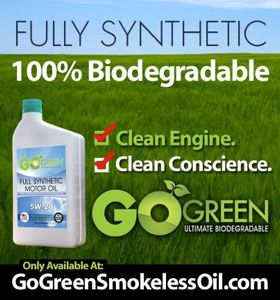 The company’s first product, Go Green Smokeless Oil, was developed by company founder Mike Hutcheson, who wanted a product that would reduce the smoke and emissions from older vehicles that were burning oil because of age and wear.

However, while it’s easy to say a product is green, how does Go Green’s oil differ from a regular motor oil?

“At Go Green Smokeless Oil International Inc. we believe in the same criteria that distinguishes all environmentally friendly products and protocol,” Graham says. “To be ‘green’ you must adhere to the ‘reduce, reuse and recycle’ protocol as well as analyzing the environmental impacts of a product’s life-cycle assessment and the potential hazardous effects of introduction into the environment.”

Graham goes on to outline the definition of “reduce” in the world of motor oil.

“To reduce the amount of motor oil an internal combustion engine uses over its lifetime, you must extend the ‘oil change interval’ or time between oil changes. This can only be accomplished by using oil that lasts longer. That means, it must have superior resistance to heat, oxidation, contaminates and combustion by-products.”

To summarize, it comes down to the better base stocks and better additive packages that can be used for extended oil change intervals and less product over the life of a vehicle.

Also in regard to “reuse” Graham points out that used motor oil should not be reused, but should be removed from the car’s engine and collected for recycling since used motor oil can be recycled or “re-refined,” as he calls it.

Graham met Go Green CEO Mike Hutcheson and vice president Cole Hutcheson in the spring of 2013 and immediately wanted to work with them.

“I have worked in bio-based lubricants and fuels for around 10 years,” he said. “From 2007 to 2009, I led the research and development team that formulated and tested the world’s first bio-based motor oil to receive the American Petroleum Institute approval for use in passenger cars.”

That motor oil was formulated with animal lipids, specifically beef tallow, and a variation was the basis for racing oil that ran in the American Lemans and NASCAR circuits.

“In addition, we developed oils for small engines (2-cycle), penetrating oils, and various other lubricants that I have shared with Go Green and we now offer,” he adds. 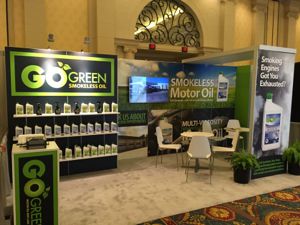 These days, the company’s newest line of bio-based full synthetic oils is formulated with a plant-based liquid hydrocarbon. These oils are said to be the best option for replacing crude oil-based motor oils. The oils are renewable, sustainable, biodegradable and less toxic than conventional motor oil products, plus they are processed and blended in the USA.

In addition to the motor oils, Go Green Smokeless Oil International also has a two-cycle and a penetrating oil both made from non-crude oil animal lipids as well.

Currently selling the product through direct marketing to designated target markets and direct to customers via the internet, Graham says that a few large auto supply stores have shown some interest, but he says the company won’t try to compete with the “big oil companies” on price. On their website, a case of 12 quarts costs $126 or $10.50 a quart.

“The fact that our oils are competitively priced is a testament to our efficient business practices, target marketing and lack of multimillion dollar marketing campaigns,” he says. “While we work hard to save on components, our main focus is to protect your engine and give Mother Nature a hand through reducing emissions, reducing the LCA, using renewable bio-based components, advancing the biodegradation rate and extending the oil change interval.”

Graham said all of the company’s business decisions are made with the environment as a factor.

“We only have one planet. We better take care of it,” said Graham. “We are lucky that people are realizing this fact and more resources are being devoted to the research and development of environmental products.”