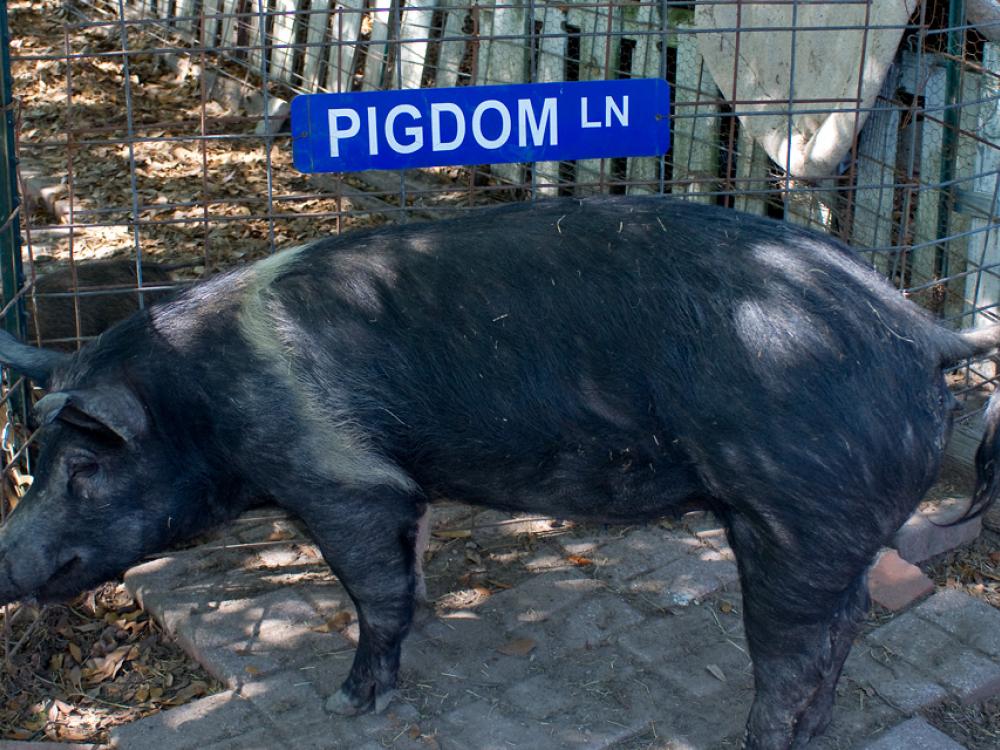 Lucy is one of 400 resident pigs at Atlasta Home Sancuary in Ennis. Photos by Karl Thibodeaux.

Feral hogs are the animal outlaws of Texas. The nonnative animals were introduced by early settlers. Domesticated pigs were released or escaped and became feral over the generations. Today an estimated 1.5 million feral pigs roam throughout much of the state. 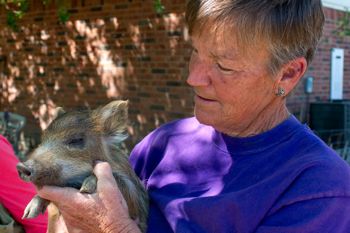 They are known for digging up turf, trampling crops and destroying wildlife habitat. As a result, landowners hunt and trap them to protect their property while some hunters shoot them for sport. They have traditionally been found in rural areas but have been spotted in urban areas in recent years. In March, the city of Dallas hired Striker Outfitters to trap the wild hogs roaming in pockets of the city, including the Great Trinity Forest.

But a woman in Ellis County wants people to see their endearing side. Chris Hinterman is the founder of Atlasta Home Sanctuary, a 75-acre ranch outside of Ennis where she cares for 400 rescued pigs, 140 of them feral.

Hinterman, who grew up around animals on an Arizona ranch, said she started raising pigs when her children were young.

“A friend of mine down the street had a potbelly pig and gave us one. Then someone said why don't you have another?” 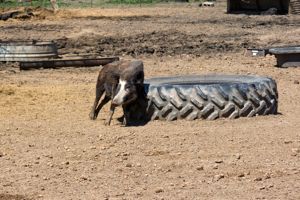 They showed them at the State Fair. Hinterman said pigs are intelligent and personable.

“Once you get to know them, you fall in love with them,” she said.

The sanctuary began in 1995, when she rescued eight potbelly pigs. As word of mouth spread, soon they had 50 pigs within a few months. In 1996, she got her first feral.

Some hunters had shot the mother. When they gutted her, they discovered two babies in the birth canal. The hunters felt remorse and took them to a animal rescuer in Austin who tracked down Hinterman. She named them Arnold and Amber, and they lived out their days on Hinterman's ranch. Arnold died at age 20 earlier this year.

Today, Hinterman operates the second largest pig rescue in the U.S. The largest, Ironwood Pig Sanctuary in Arizona, has nearly 600 pigs, none of them feral. 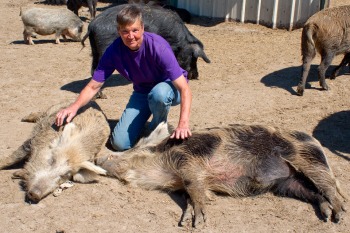 “Arizonia doesn’t have a feral hog problem,” said Ben Watkins, Ironwood’s cofounder. “It gets really hot. They can’t survive in the desert.”

Elizabeth and Manny flop down at Chris Hinterman's feet for a photo op.

In addition to the ferals, Hinterman takes in surrendered farm hogs and potbellied pigs from across the state and as far away as Oklahoma, Louisiana and California. They are dropped off by pig owners who can’t – or don’t want to – keep their pets anymore. Many bought miniature pigs, believing they’d stay small. Some are given up by FFA kids who got attached to them and can’t bear to send them to slaughter.

Unless the feral hogs have grown up with humans, Hinterman cannot accept adult ferals – like many wild animals, they can't tolerate the captivity.

"They would panic," she said.

She typically takes in only the feral babies. Most of them are delivered by hunters who shot the mother and then feel guilty about leaving the piglets, said Hinterman.

The money goes toward getting the pig neutered or spayed and vaccinated. She foots the weekly $1,300 food bill. She credits her truck driving husband of 40 years for paying the tab. 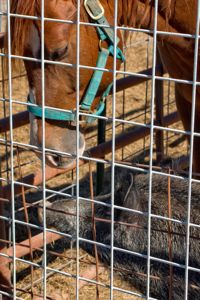 She spends her mornings doling out breakfast to hundreds of pigs along with 18 horses, four cows, 52 dogs, eight cats plus a flock of chickens and ducks, some of which she took in when the Serenity Springs Sanctuary closed. She spends afternoons giving tours to visitors, often school kids.

Bo the horse and his feral friend Valentine.

The pigs are people friendly, coming up to greet guests as they walk the grounds. Hinterman has named each one and remembers those names – JJ, Cheech, Pumpkin, Honeybee, Melinda, Frank.

One of her favorites is Manny, a feral pig who came from the city of Mansfield.

He escaped his home and led authorities back where they found dozens of severely neglected animals. Hinterman had been called in to help with some of the livestock when she noticed him and asked about his fate. “What about him?” she asked. The authorities said he was going to be slaughtered since he was feral. She asked "Why? He was the one who went for help and saved the others." He was the hero. That’s how he came to be at Atlastahome. 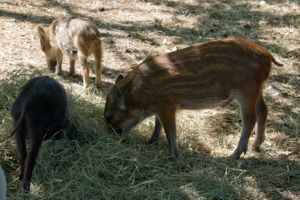 Buckwheat came from an Amarillo ranch. His mother was shot and they found him underneath her body. Like many of the other ferals, Hinterman doated on him till he was full grown. Now he follows Hinterman around like her guard dog.

Frankie, Honeybee and Violet are some of the babies in the sanctuary's nursery.

“I love the ferals, we have the space for them and they’re easy keepers.”

April is a baby feral with stylish spots. 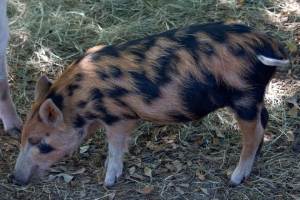 The piglets are separated in an outdoor nursery area until they’re big enough to join the herd. The adult newbies stay isolated for a week while they adjust to their new digs. All four hundred pigs bed down in the 4,000 square foot barn together at night.

Some of the former pets have behavior issues. One particularly spoiled pig wouldn’t let Grandma and Grampa come down the hall, said Hinterman. She said most are straightened out simply by peer pressure. The other pigs won’t tolerate jerks.

“When they’re within a herd, they teach each other.”

Hinterman even has a piggy camp that pig parents can send their pets to, to learn manners.

As we tour the barnyard, curious pigs eagerly sniff us. They lie at our feet when we stop to talk. Only one named Cookie darts into the barn when we approach. She fears humans after she escaped from a Dallas County livestock pen. Hinterman said staff used 10 inmates in jumpsuits to chase her for two hours and she’s never gotten over it.

Pigs can be sensitive souls and people just haven’t taken the time to know them, said Hinterman. They’re one of the top most intelligent animals.  “Pigs can do a circus’s worth of tricks,” said a New York Times article. They have poor eyesight but they can smell a snack seven miles away and 25 feet underground. In the wild, they are foraging animals that eat mostly vegetation, such as grasses, roots, acorns, fruits and mushrooms. They’re like teenagers said Hinterman. They have to be kept busy or they’ll get in trouble.

“My purpose is to educate,” said Hinterman. 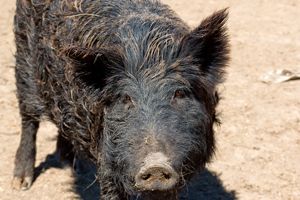 Hinterman believes if more people would get to know them, they wouldn’t be so keen on shooting them from helicopters, one of the methods used to clear them from ranches.

Waffles, fresh from a mud bath.

According to the Dallas Morning News, an estimated 730,000 were killed in Texas in 2010. So far, in Dallas about 20 have been rounded up, bound for the slaughterhouse.

But Hinterman says, it’s people who are encroaching on wildlife. Why not fence the ferals in and make a park where kids could go and see them? Or just leave them alone. She believes they will forage for food then move on.

She’s not the only one who thinks feral hogs need better public relations.

Allison Smith, the founder of the DFW Pig Parents group, wishes more could be done to control the ferals instead of kill them. 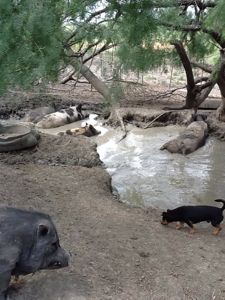 “I wish we could trap them and relocate them to safe areas,” she said.

Swine contraception is still under research. Brett Johnson, an urban wildlife specialist in charge of the city of Dallas' feral hog control program, speculates it would only work in a controlled environment.

"In an open population (which is what we have here) contraceptives have not been proven to be successful at controlling population levels. In controlled environments, I could see it working."

Smith said the pigs who wind up at Hinterman’s place are lucky. Hinterman admits no one's ever tried to runaway.

“My husband’s the worst about leaving the gate open,” she jokes.

Occasionally one might wander from the enclosed pens down the road or into one of their pastures. But it's not long before they’ll be pacing the fence begging to get back in. They know they’ve found a home at last.