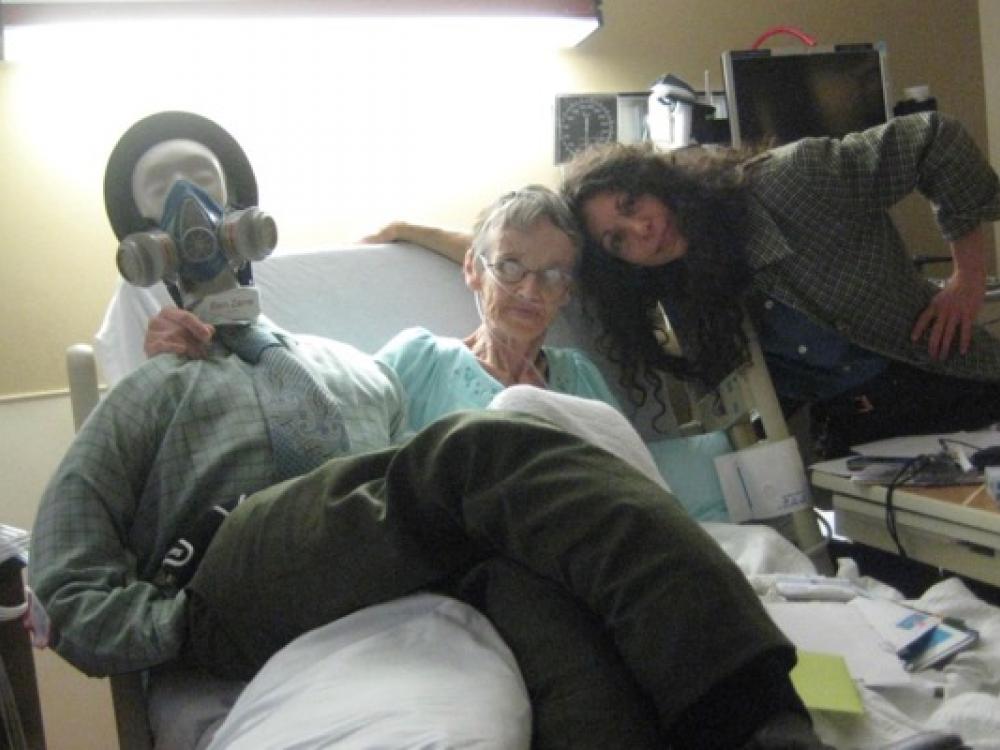 A DFW woman who fought to protect the environment for four decades will be remembered on a day when everyone wears green.

Harriet Varnum Irby will be memorialized by friends and family on St. Patrick's Day, March 17, at 1 p.m, at First Jefferson Unitarian Universalist Church, 1959 Sandy Lane in Fort Worth.

Irby was well known among the DFW environmental community for her activism, most recently against gas drilling over the last decade. She advocated for environmental protection until the last months of her life despite failing health, which she attributed in part to air pollution.

Irby was born Dec. 2, 1942 in Minnesota and raised in Rockford, Illinois by her father, a college math professor, and mother, a classical pianist.

Fellow activist Faith Chatham met Irby in 1982 when they were both graduate students at the University of Texas at Arlington.

Chatham and Irby shared an interest in politics, urban studies and Russian language and culture.

Chatham said the small but spry woman was a Mayflower descendent and a heavy weight when it came to intellectual pursuits. The Mensa member never shied away from controversy.

“She went out of her way to shock people,” said Chatham. “She had big bust of Lenin in her living room.”

Lon Burnam, former Fort Worth state representative and leader of Tarrant Coalition for Environmental Awareness, met Irby in the 1970s. He described her as like a “dog on a bone” when it came to issues she cared about.

“She was smarter than average, well read, and understood the issues backward and forwards.”

According to Chatham, Irby’s pet causes included nature and animals. Over the years, she left her mark on the city of Pantego, a small community of 2,500 within Arlington’s boundaries.

In the 1980s, Irby joined the park board and was instrumental in creating Pantego’s first public green space, Bicentenniel Park. As southwest Arlington was being developed, she defended trees along Pioneer Parkway.

“She didn’t chain herself to a tree but she stood in front of a few bulldozers,” said Chatham, with a chuckle. “She weighed under a 100 pounds but she was formidable.”

Irby was friends with Pantego’s city secretary and served as the city’s first informal animal control officer. The secretary relayed her the calls.

“For many years, if someone called about a loose animal, Irby would show up. She’d go out and catch it, take it to the vet, get it fixed and find a home for it.”

Over the years, her home filled up with rescued cats, while her yard was populated with rescued chickens. When the city moved to outlaw the urban fowl, Irby hired an attorney to represent them. As a result, chickens were legalized with certain restrictions.

Water was another topic of interest and the subject of her masters dissertation. 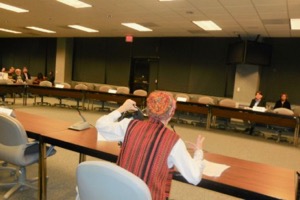 She loathed the practice of concreting creeks for flood control. She researched alternative natural methods and spoke out to Arlington and Pantego against cementing Rush Creek, though her warnings went unheeded.

According to Chatham, she also drew attention to the city well water’s high-sodium content after she observed plants dying after she watered them.

Harriet Irby speaking at an EPA hearing in Arlington in 2016. Photo courtesy of Kim Feil.

Chatham said she lost touch with Irby in the 1990s but the pair reunited in the early 2000s.

Their mission was to monitor government in the DFW region at all levels, city, state and federal. They were initially interested in transportation issues - toll roads and public transit. But as gas drilling came to Tarrant County, their focus soon became fracking.

Irby had signed a gas drilling lease as many had, not knowing the dangers. However, with no city gas drilling ordinance in Arlington, she and Chatham were soon appalled at what they saw as reckless practices.

At the height of fracking in Tarrant County, she and Irby called city leaders frequently about what they saw as gross violations and attended every TCEQ and EPA meeting.

During this time, Irby took younger activists under her wing.

“We were at a park and this big old truck pulls up and out comes this small, frail woman,” she recalled.

“She took me to my very first [fracking] protest in Fort Worth,” said Feil.

Irby coached Feil on who to call with an issue, schooled her on politics and took her to Austin to speak to the legislature.

She even named Feil’s protest prop, a notorious gas-masked wearing doll known as Ben Zene, which Feil carries around to demonstrations and hearings.

“She made a badge with his name on it,” said Feil. “At many protests, it was just the three of us, Harriet, me and Ben Zene.”

Many times Irby toted along her oxygen tank.

Feil said some people mistook Irby for a lifelong cigarette smoker because of her thin frame and husky voice but she suffered from health problems all her life. She had polio and rheumatic fever as a child. She was an ovarian cancer survivor and believed the treatments had done irreparable damage to her organs.

She had her thyroid removed, which caused her metabolism to run high. She suffered from MRSA in both lungs.

Health issues also plagued her family. Her mother had died from cancer when Irby was a child. One of her daughters, Sheryl Singh, a professional ballerina, also died from cancer.

She saw a direct correlation between her growing health problems and living near gas drilling.

“She was all about clean air because she had suffered and her family had suffered,” said Feil.

“She was there [fighting gas drilling] from the very beginning,” said Wilson.

She said Irby’s health began to decline after a fracking well went into her neighborhood.

Wilson said visited the facility near Irby’s house just recently and caught emissions spewing from it with her infrared camera.

“We tried to help [with fracking in Arlington],” said Wilson. “Until we got the camera it was harder to help.”

Levine added that Irby didn’t spare the medical profession from her opinion.

“She was always arguing with her doctors. She was as feisty with them as she was in politics.” 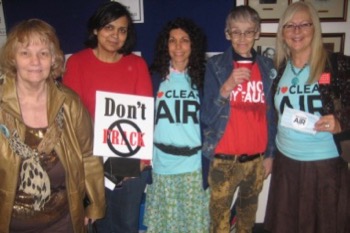 Ranjana Bhandari, founder of Liveable Arlington, said she got to know Irby after she got involved in gas drilling issues. She was amazed at Irby’s tenacity despite her challenges and remembers the first time she heard her speak in a public setting.

“Harriet got up to speak about gas drilling and she gave this perfectly laid-out speech,” she said. “She never got distracted by petty fighting or the difficulty of her illnesses."

Passionate about the cause till the end, Irby had volunteered to work the Liveable Arlington table for two hours at Arlington’s Ecofest in October. It was just a month before she moved to Austin to live out her final days with her daughter and family.

“She was our staunchest supporter. Our hardest worker," said Bhandari. "She never took her eye off the ball.”

“She was our staunchest supporter. Our hardest worker," said Bhandari. "She never took her eye off the ball.”

Irby is survived by a daughter Sheila DeLeon Hyde and son-in-law David Hyde of Round Rock; sister Phylllis Varnum Carlson of Phoenix, AZ; a brother David Varnum of San Francisco; and three grandsons, Brandon DeLeon and Nolan DeLeon of Round Rock and Preston DeLeon of San Marcos, along with three step-grandchildren and four step-great grand children.

A memorial will be held March 17 at First Jefferson Unitarian Universalist Church, 1959 Sandy Lane in Fort Worth at 1 p.m. followed by a reception at the church. In lieu of flowers, the family requests donations be made to the Harriet Varnum Irby Fund, which has been established with the Town of Pantego to continue with her community service endeavors. Donations can be made by check or credit card to the Town of Pantego at 1614 S. Bowen Road, Pantego, TX 76013.