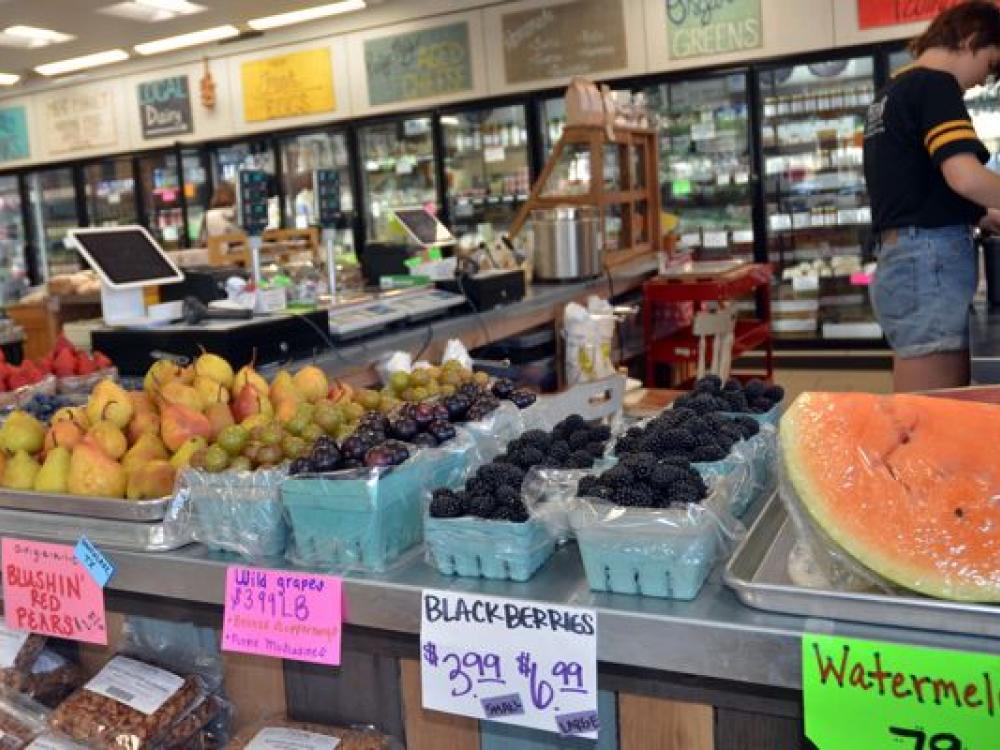 Farmers Market of Grapevine is open seven days a week in a storefront in downtown Grapevine. Photos by Barbara Kessler.

When that craving hits for a juicy heirloom tomato, a muscadine grape or a Parker County peach, it’s time to the head to a farmers market here in North Texas. You can find markets in Dallas, Coppell, Frisco, Fort Worth and many small towns. 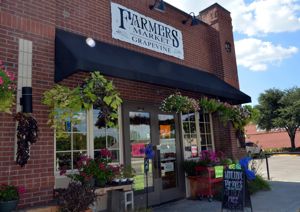 But most of them are open only on Saturdays or on certain weekdays (the downtown Dallas and Ridgmar market in Fort Worth being notable exceptions). So if you miss the local market day(s), you just have to live with your hankering for a honeydew until next week.

Jack and Racquel Morehead, who’ve been operating the outdoor farmers market at Grapevine’s Town Square Gazebo for seven years, decided that this suburb, with its growing population of downtown residents and steady tourist traffic, could easily sustain a seven-day week market.

"Not everybody can make it to the outdoor market and the people of Grapevine really wanted something on Main Street where they could get groceries,” Racquel Morehead said.

The all-week Farmers Market of Grapevine opened last November at 520 S. Main Street in Grapevine and this little market, tucked into an old-town style brick shop, is nothing less than a fun house for foodies. 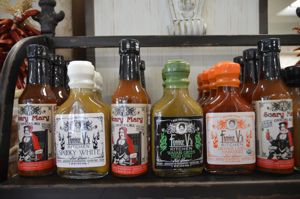 You’ll notice this immediately as you enter past a throng of hanging impatiens, purslane and ferns. Turn to your right and there are a bajillion bottles of honey, local, raw, flavored. Turn to your left, and be careful not to trip over that Black Diamond Watermelon. (You may know that as one of the “old fashioned kind” that still tastes like watermelon.) Continue forward and you’ll find a Texans’ delight, a shelf full of hot sauces, including treats like Frankie V’s Kitchen “Spooky White” Hot Sauce made from white and orange habaneros right here in Dallas, Texas.

On any given day, you’re likely to be welcomed by sample plates of tomato slices (salted if you wish), little tubs of strategically placed cantaloupe and peaches slices, a dollop of elderberry syrup in a tasting cup or even a swig of cold-brew coffee.

Before you lays a colorful feast for the eyes, with Texas peaches, plums, blueberries, strawberries, peppers, melons, green beans, eggplant and more lined up everywhere. It is also a feast for a feast, because you can find everything for a good meal here, from local eggs, meats and cheeses to locally milled oats and locally made bread.

Did we mention that a lot of the food is local? Most of the produce is seasonal and from Texas. 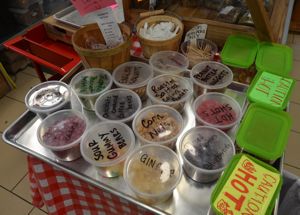 Nearly all of the handcrafted items are Texas products too. The bananas and avocado, though, come in from elsewhere, from where they’re grown.

Customers are invited to partake of a sample tray.

Sidle over to the baked goods near the cash register and you’ll find a warmer with samples of tamales made by the Pulido family of Fort Worth. Peek around the corner and there’s a tableful of nut butters, salsas and candies to try; most made right here, somewhere in the Metroplex, like caramels from Carmelicious in Lewisville and cold brew coffee Kapi Coffee Roasters in Coppell.

The Moreheads bring a few items in from vendors in Oklahoma, New Mexico or their own family farm in California. The Morehead family has a farm or two or three, among their extended family.

They’ve been growing food and selling it at market for generations.

Racquel and Jack both trace their families back to the Texas panhandle, near Dumas. But Jack moved as a child with his parents to Southern California, where he grew up on a produce farm. Meanwhile, Racquel moved within Texas with her parents, who also had a farm in San Angelo, and later in the Metroplex, where her dad operated farmers markets in Hurst, North Richland Hills and Colleyville. Today, her dad still runs a farm in Maybank and sends in his peaches for sale. The couple’s son and daughter, Braxton and Brittany Morehead, help them run the Grapevine markets, and Braxton’s young daughter Lily also is a familiar face at the market, a sort of store mascot.

So it is no surprise when Racquel says that her family works with some 25 farmers they’ve known for more than a generation.

The Moreheads want to support these growers and cottage food producers by giving them a sales outlet so they can spend their time concentrating on farming or raising chickens or cattle, as the case may be. Racquel says that the many hand-crafted foods they carry face varying requirements under the Texas cottage food law. Strict labeling is required, to delineate ingredients, for “home-baked” goods. But other products, such as the meats are USDA inspected, just like in any grocery.

When possible, Racquel prefers that the produced cottage-made foods -- jams, breads, candies and the like -- are made in a commercial kitchen, as is the practice of many small producers who rent space in specially-equipped kitchens.

Beyond that, the business model for the indoor market is simple: A consignment plan with the producers getting 75 percent and the Moreheads 25 percent. 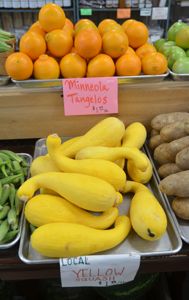 “Everybody has been very happy,” she said. “We’ve been bombarded with people who want to set up in our store, vendors, farmers.” But she warns, the Moreheads are “very, very selective” with the products they carry. They want all the food they offer to be safe and have a good value, she said. The indoor market aims not just to support farmers, but to please the customers who were asking for a full-week market.

“The community is happy because they can come and get it seven days a week, 360 days of the year,” she said, ticking off the very few holidays, Christmas, Thanksgiving, Easter, when the market expects to be closed. Its current hours are 8 am to 8 pm, Monday through Saturday and 9 am to 6 pm on Sundays. (Meanwhile the outdoor Grapevine Farmers Market, also run by the Moreheads and staff, continues apace one block off Main Street at the Town Square Gazebo; it’s open Thursday-Saturday, April to October 15.)

Since its opening, the indoor market has been building a reputation as a place to find organic produce as well as pastured beef, chicken and dairy products made from pastured animals. Eggs come from various local producers, and some are organic.

“We get as much local and as much organic as we can possibly get,” Racquel said. “We work as hard as we can to search it out…down to locally made buttermilk.”

And even when the offerings are conventionally grown, they’re likely to be less processed. Unlike the large groceries that must buy produce in vast quantities from warehouses, the Grapevine market pulls in fruits and vegetables straight from the farm. None of the produce is gassed to ripen it, a common practice in the grocery industry.

The market also offers vegan foods and gluten-free bakery items, such as Pinch of Salt Pastries of Grapevine and Dallas, which are made in a wheat-free facility, so they’re safe for celiacs, Racquel said.

The Moreheads consider the treatment of the animals providing some of the foods they sell, catering to customers who want humanely produced foods, such as the eggs from backyard producers.

“Even the beef is grass-fed and grass finished and locally slaughtered,” Racquel said. “Because I grew up on a farm, I’m sensitive to how the animals are treated.”

But you’re wondering, what is the most popular item at this chock-a-block local food store?

It’s right there at the table front and center, displaying its many permutations, heirloom, on-the-vine, grape-sized, summer slicing.

Tomatoes. Yes, that most frequently homegrown vegetable that’s really a fruit, is the most in demand here too. Take your pick of the usual tasty Beefeaters (among others) or find a treat among the knotty bunch of reddish, greenish and/or purplish heirlooms.

Or better yet, have your tomatoes in multiples. Braxton Morehead uses several heirloom varieties in the salsa he makes for the house brand. He also makes the house guacamole.The Moreheads long plan is to keep the market in the family, passing it down to the third generation.