Every Mavericks’ three-pointer plants another tree in Dallas 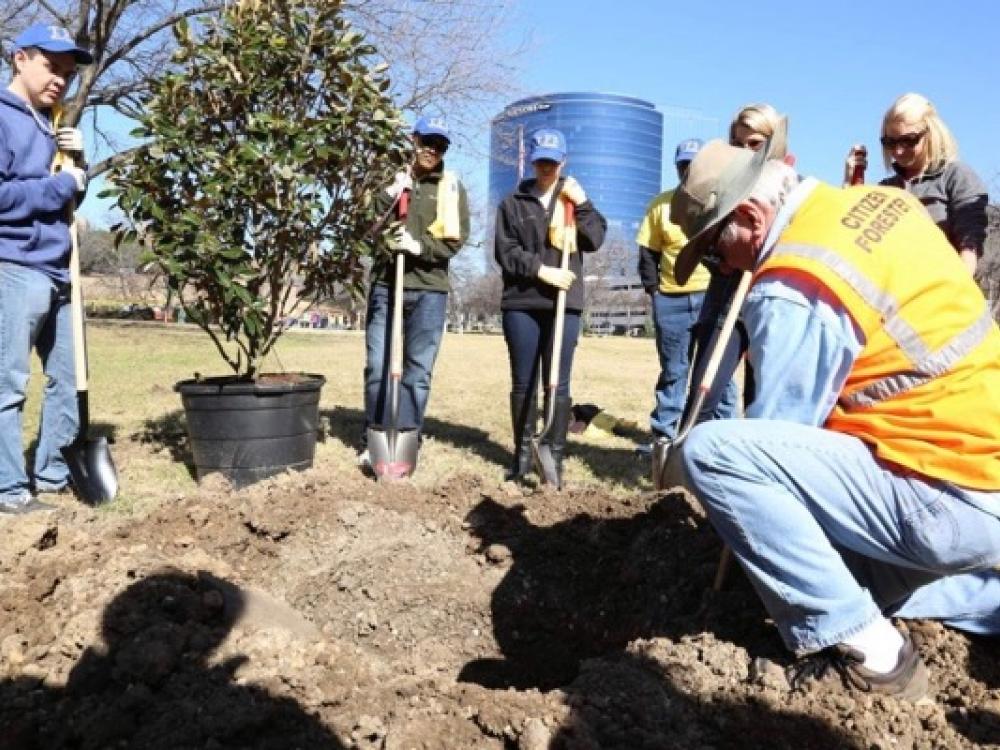 Trees for Threes volunteers planted trees at Reverchon Park in Dallas this spring.

Every time the Dallas Mavericks score a three pointer, the city of Dallas gets a little greener. That’s because since 2010, Trees for Threes, a partnership between the Mavs, PWC, a Big Four accounting and consulting firm; Arbological Services; and the Dallas Independent School District, plants one tree for every three point basket.

“The program is an effort to enrich the areas where people live and learn, help sustain the environment and provide green space for generations to come,” according to Katie Edwards, spokesperson for the Dallas Mavericks and the Mavs Foundation.

Trees for Threes concluded its sixth season of the community initiative in April with more than 2,100 trees planted so far in the Dallas area, Edwards said.

The trees are planted at schools in the Dallas ISD as well as city parks and recreation centers, typically in March and April. Edwards said that Trees for Threes planted 367 trees in Dallas last season.

Dallas-based Arborilogical Services provides support and maintenance for the trees, including inspection, fertilization and treatment for three years following the planting.

The Mavericks’ local participation includes assisting in the selection of sites, volunteer plantings and general promotion of the project.

“Special appearances by Dallas Mavericks players at a ceremonial planting help to bring attention to the project and celebrate the impact it makes on the community,” Edwards said.

Trees for Threes is part of the Mavericks eco-friendly initiative, Guard the Planet, which falls under the “Mavs Go Green” program. The Mavs Go Green is part of the bigger NBA Green initiative, a partnership with the Green Sports Alliance, Arbor Day Foundation and Bonneville Environmental Foundation. The Natural Resources Defense Council is the greening advisor to all the leagues, including the NBA.

Since the Mavs launched Trees for Threes, the New York Knicks, Brooklyn Nets and the Cleveland Cavaliers have started their own tree planting programs in partnership with PWC.

In addition to Trees for Threes, the Dallas Mavericks are involved in an E-cycle and Spring Cleaning Drive that is now in its eighth year and saw 25,220 pounds of donations at various Goodwill locations and the American Airlines Center this past April. There is also a “Guard the Planet with Coca Cola” initiative under the “Mavs Go Green” umbrella, which consists of  season-long awareness regarding recycling receptacles throughout the arena, courtesy of Coca Cola Recycling.