EPA to discuss lead contamination in Garland at online meeting 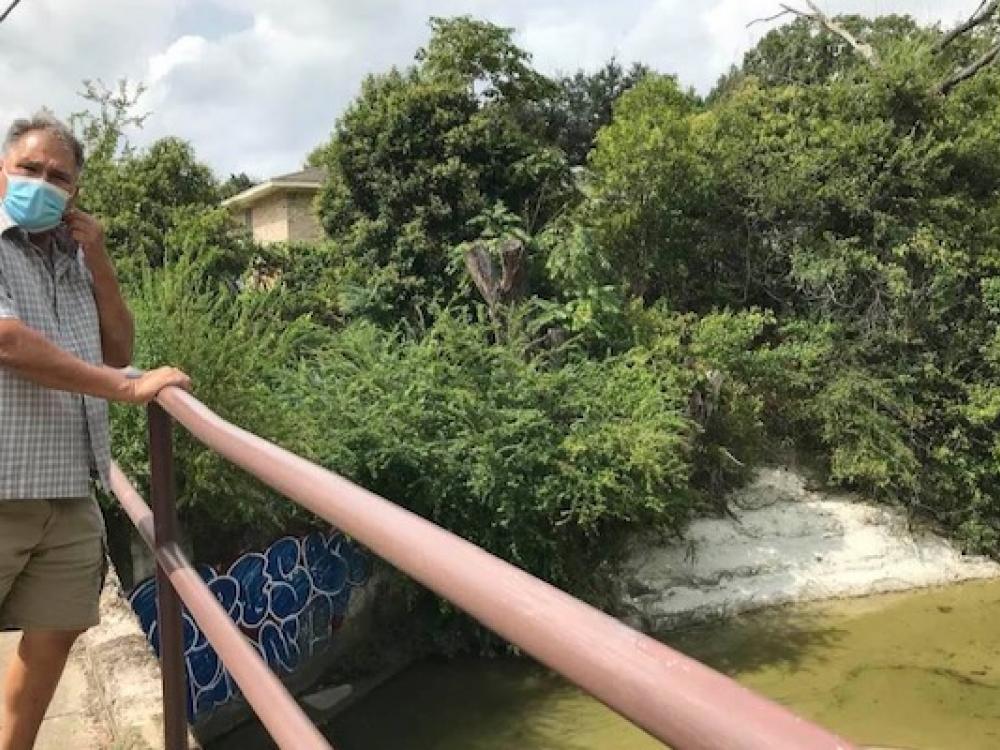 Don Phillips, leader of Clean Up Garland, is concerned that pollutants from former industrial plants are running off into Duck Creek, which flows into the East Fork of the Trinity River. Photo by Betsy Friauf.

Dallas activists want to "pack the house" – virtually – for an online EPA meeting on Thursday to call for an expanded investigation of pollutants in a Garland neighborhood.

The U. S. Environmental Protection Agency is hosting the virtual meeting on Aug. 5 from 6:30 p.m. to 8 p.m. to provide an update on the Globe Union site at 1111 S. Shiloh Road in Garland.

According to the Dallas Morning News, the EPA alerted Garland ISD in July about lead being found near Park Crest Elementary about a mile from the former battery factory.

At Thursday's meeting, EPA staff will provide a presentation on residential sampling results and cleanup plans. This will be followed by a question and answer session.

"Garland is a monster," said Victoria Howard, leader of the Dallas Sierra Club’s EcoAction Committee, refering to heavy industry, past and present, that she says threatens nearby neighborhoods. "We really want to pack [the meeting] with environmentalists and residents alike."

Former employees have stated that 1,700 employees worked in three shifts at the height of the Garland operations. Available records confirm that the facility was on a 24-hour schedule and that at times the facility ran 6 days per week.

Following the end of battery production in 1995, the property was used as a trucking business, and later as a warehouse for an exporter of used photocopiers.

The Globe Union former site slopes to the west and drainage flows to a tributary, aka Stream 2C4, to Duck Creek, which empties into the East Fork of the Trinity River .

The EPA and the Texas Commission on Environmental Quality sampled soil along the creek in February 2020 and finished a report in May last year.

High levels of lead were found in several locations. A residential property, south of the Globe-Union site, two blocks from Park Crest Elementary, showed 61,200 parts per million, 153 times the EPA threshold for cleanup.

Collin Yarbrough, an SMU grad student and Dallas Sierra Club member, has been working with Phillips to get answers from the EPA. Over the summer, he researched the Garland neighborhood as part of his master thesis in sustainability and development.

Yarbrough said the community is a prime example of environmental injustice in a low-income, primarily minority district, where residents have little political power or protection against polluters.

“There’s no buffer. On one side of the street you have heavy industry and on the other side you have residential neighborhoods.”

He admits a Texas Department of State Health Services did a study in 2018 at the request of concerned residents and found no cancer cluster. Still he wonders about the cumulative effect on residents based on anecdotal evidence he’s collected through talking with residents.

“There's still a ton of questions to be answered. This is all just scratching the surface right now.”

Dallas Sierra Club's Howard says she and other activists helping the Garland residents, believe that the lingering contamination in the area is not just emitting from the former Globe Union plant but from dozens of heavy polluting industrial sites that operated over decades. She fears that EPA will move in quickly to mitigate the sampled sites and then will shut down the investigation.

“The EPA is trying to link this contamination to this one business,” said Howard. “Our thesis is that Globe Union is one tiny aspect of this.”

About: The U.S. Environmental Protection Agency will hold a virtual community meeting to provide a status update for the Globe Union Inc. site. Staff will present on residential sampling results and cleanup plans moving forward, followed by a question-and-answer session.