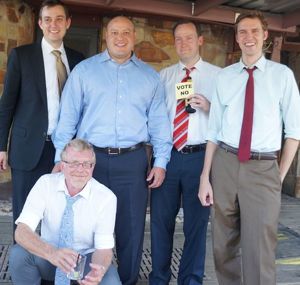 Local environmental advocates celebrated at a downtown watering hole Wednesday night after the Dallas City Council finally put an end to a request by Trinity East Energy to drill on public parkland.

Jim Schermbeck, director of Downwinders at Risk, said the victory was significant.

“This marks a maturation of the environmental movement in this region,” he said. “This was a case they said was pointless, that the city was going to approve and there was nothing we could do about it and we halted it cold.” 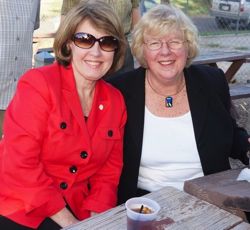 The saga began when Trinity East leased the land near Luna Vista Golf Course in 2008 for $19 million from the city of Dallas knowing that the current law prohibited drilling in parks. They applied for special use permits to drill for natural gas, which were denied twice by the Dallas City Plan Commission after a grassroots coalition of residents and activists rose up in opposition. When the vote came before the council on Wednesday, a super majority, 12 of 15 votes, was needed to overturn the CPC’s decision.

Despite reassurances they had four “no” votes, afterwards some fracking opponents admitted they were nervous that the pro-drilling side would be lobbying hard in the final hours. 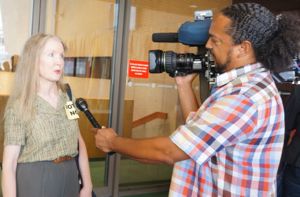 “I’m happy and relieved,” said Molly Rooke, a long-time Dallas Sierra Club activist. “I was afraid they were going to pull something at the last minute.”

(Left, Molly Rooke of the Dallas Sierra Club speaks to the media.)

Before the vote, Mayor Mike Rawlings gave an impassioned plea for council members to approve the drilling to avoid a potential lawsuit. While admitting he was personally opposed to drilling in Dallas, he argued it was a good “bet” that the company wouldn’t drill, due to economic reasons, before the lease expired.

However, as at previous hearings, speakers from the anti-drilling side outnumbered the industry reps. Even after Mayor Rawlings restricted the time for speakers, 38 speakers opposing the Trinity East permits were rushed through, each citing concerns about pollution and water waste. Meanwhile, only seven spoke in favor.

(Above, the crowd applauds the Council's decision Aug. 28)

Zac Trahan, director of Texas Campaign for the Environment’s Dallas office, said the environmental lobbying group formed for the fight is one of the strongest in recent years.

“You’d have to go back a few decades to find a coalition with this diversity,” he said. 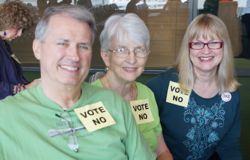 Despite the outcome, both Trahan and Rooke pointed out that the Council still leans in favor of drilling. While six city council members -- Scott Griggs, Adam Medrano, Monica Alonzo, Carolyn Davis, Sandy Greyson and Philip Kingston -- blocked the permits. Nine voted to approve them.

“The reason we won this was because it took a super majority,” said Rooke. “I don’t think we’re there yet.”

However, with this notch on their belts, the green activists showed no sign of slowing down.

“We’re not going away,” said Gary Stuard, a member of Dallas Residents at Risk and co-chair of Dallas MoveOn. “Goodness knows there are other issues.”

Julie Thibodeaux covers environmental issues, green topics and sustainable living for Green Source DFW. Previously, she worked as an editor and writer at the Fort Worth Star-Telegram. Contact her at Julie@greensourcedfw.org. See jthibodeaux.com.