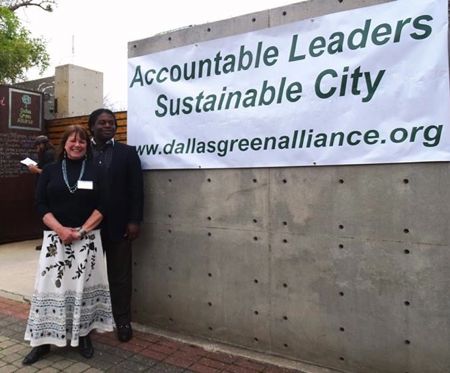 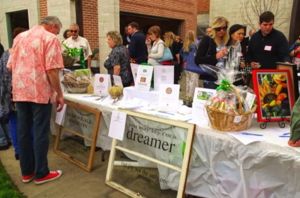 An environmentally conscious crowd filled an upscale Deep Ellum plaza on Sunday evening with the goal of pooling their resources, time and influence to elect green city council candidates in May.

The Dallas Green Alliance fundraiser sold more 200 tickets at $50 each for the event, which drew organic farmers, beekeepers, environmental activists, park lovers and sustainability advocates of all stripes. 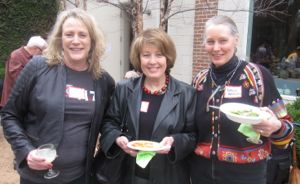 The political action committee formed last summer with the purpose of filling at least four of the six open Dallas city council seats with green-minded representatives in the May city election. If elected, they would join four existing green council members – Sandy Greyson, Scott Griggs, Philip Kingston and Adam Medrano – to become an environmentally-friendly majority of eight.

At the fundraiser, former Dallas City Councilwoman Angela Hunt gave a rabble rousing speech. Telling an enthusiastic crowd the current city council is out of touch with what Dallas wants, she cited the Trinity Tollroad as the ultimate example, as plans forge ahead though polls show the majority of Dallasites don’t want it. 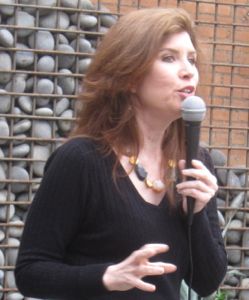 “They think the tollroad is going to solve all of our ills,” she said.

While the Dallas Green Alliance has drawn supporters from all areas of the green community, the coalition has rallied around the battle to stop the six-lane Trinity Tollroad from being built in the Trinity flood plain. 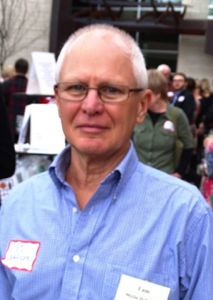 Opponents of the tollroad say it would waste limited transportation dollars, threaten flood protection and destroy plans for a park system along the floodway.

As the Dallas Green Alliance vets candidates in the coming weeks, only those candidates who oppose the tollroad will be considered.

“If a candidate says they don’t know where they stand on the tollroad, turn around and run,” said Hunt. “The Trinity Tollroad really exposes what someone’s values are.” 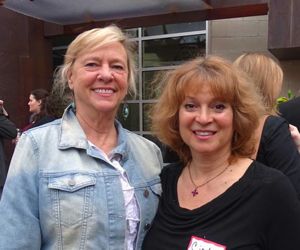 Last month and early March, the DGA sent questionnaires to Dallas City Council candidates. So far, the Alliance has received 22 completed forms, which cover the topics of most concern to its members: transportation, open spaces, natural resources and quality of life. Those results are posted on the DGA website.

Hunt said the time is ripe for change and encouraged attendees to support green candidates with donations as well as by volunteering.

“This is a remarkable opportunity to make a difference in our community.”