Electric buses to link up popular Fort Worth stops 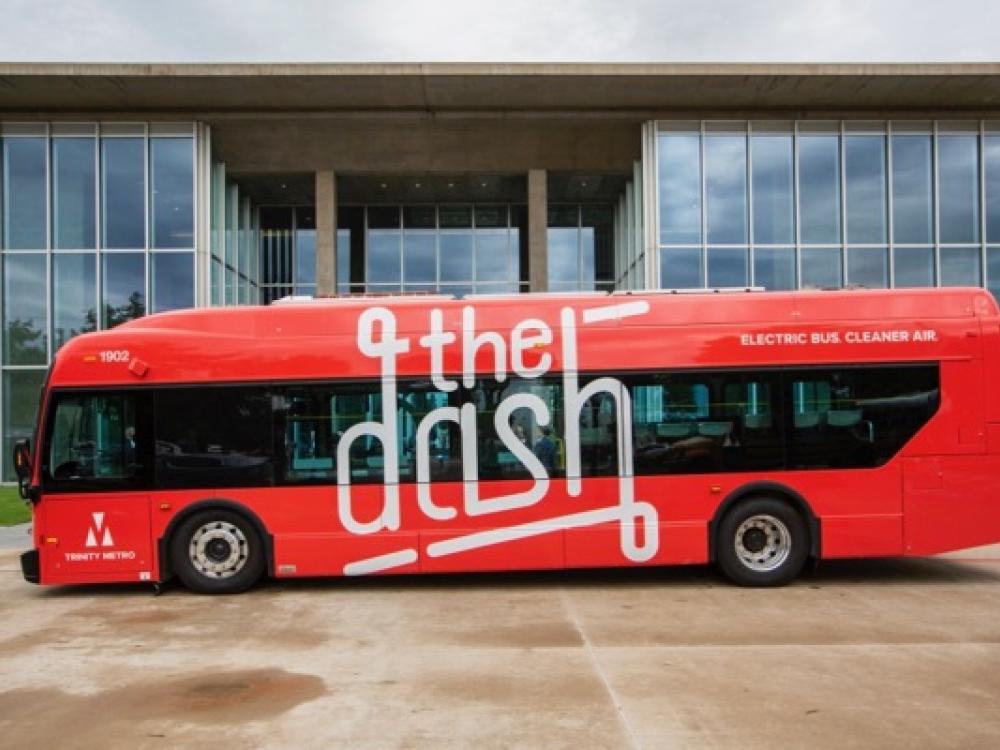 Fort Worth is joining Dallas and a growing list of cities worldwide adding cleaner and quieter buses to their public transportation fleets.

Trinity Metro, Tarrant County’s regional transportation agency, has purchased four of the zero-emissions battery-electric buses. By fall, the people movers will be shuttling riders between downtown and the Cultural District, the new Dickies Arena and entertainment and dining spots along West 7th Street.

The Dash, as the service will be called, begins operating on Sept. 22. Riders will pay $2 for a one-way ticket or $5 for an all-day pass.

“Trinity Metro is always exploring innovative transit options, and the battery-electric bus we’re using for The Dash is the perfect fit for this route,” said Wayne Gensler, Trinity Metro vice president and chief operating officer for Bus and Paratransit. “Passengers will enjoy a ride that is extremely quiet and has a very low level of external noise.”

The new service is a public/private partnership, with Trinity Metro paying 75 percent and community partners covering the remaining 25 percent.

“We are happy with the buses,” said Todd Plesko, DART’s vice president of Service, Planning and Scheduling. “We have learned that the quick-charge technology works reliably and the vehicles are quiet.”

DART would like to get more. The agency has applied to the Federal Transit Administration’s FY2019 Low or No Emission Program to purchase three to six additional e-buses. Plesko says his agency is interested in evaluating vehicles with longer range than the current buses’ 30 miles, which restricts them to shorter routes. 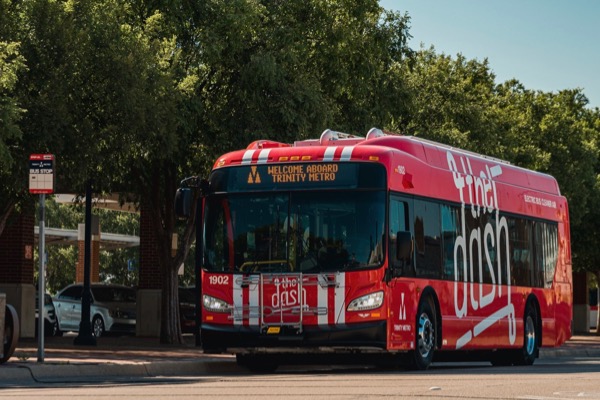 The buses are designed to run all day before needing to recharge.

Trinity Metro’s New Flyer Xcelsior Charge buses will travel about 150 miles between charges and are designed to run for a full day before plugging in. A charging station downtown will top off the buses in three to four hours. The North Central Texas Council of Governments provided funding for the Alabama-built vehicles, which seat 32 (plus 35 standing passengers) and cost $840,000 apiece. Compressed natural gas buses are cheaper -- about $560,000 -- but both Gensler and Plesko say maintenance costs for e-buses are forecast to be much lower than their fossil-fuel counterparts. Consequently, total ownership costs for each type should be comparable, according to Trinity Metro.

A Bloomberg NEF study shows e-bus service growing worldwide, especially in jurisdictions with emissions-reduction mandates. An example is China, where more than 400,000 e-buses were in operation in 2018. By contrast, the U.S. had only 300, a figure expected to grow to 5,000 by 2025.

All Trinity Metro bus drivers are training on The Dash to ensure a smooth startup in September. “If everything goes as well as we anticipate, we would consider adding more electric buses to help serve our customers’ transportation needs,” Gensler said.

John Kent is a Fort Worth-based freelance writer and former staff writer for the Albuquerque Journal. He has also written stories for the Associated Press, Dallas Morning News, Fort Worth Star-Telegram, Fort Worth Business Press and the Corpus Christi Caller-Times.