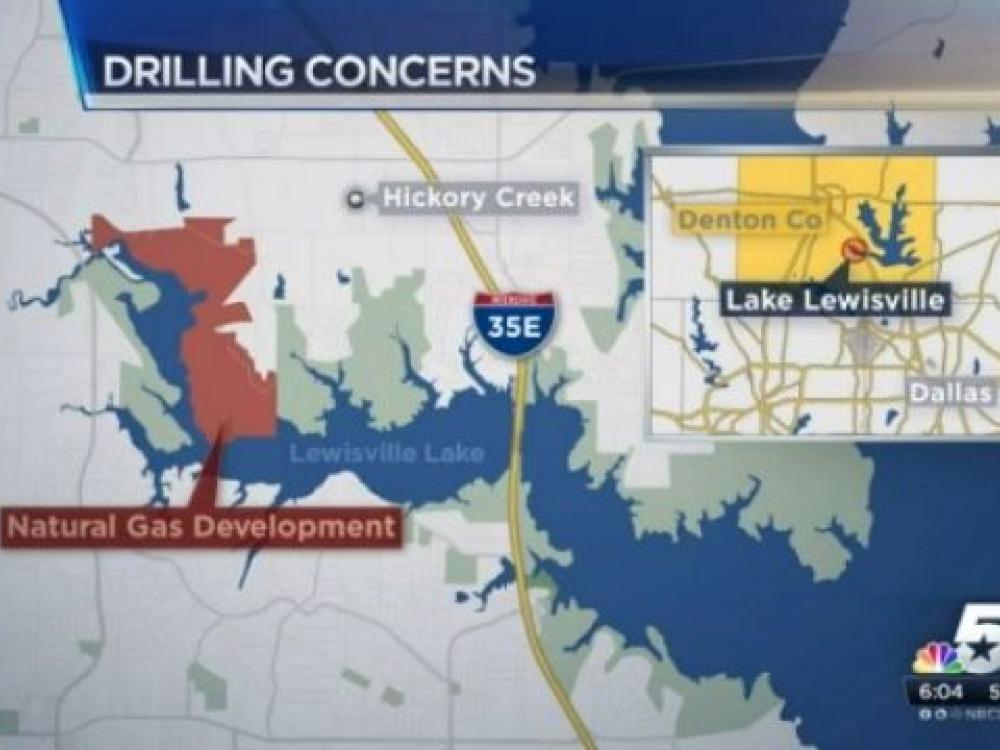 The U.S. Bureau of Land Management, the agency that handles drilling rights on public lands, was considering allowing fracking on the northwest side of Lake Lewisville. Photo courtesy of DFW NBC5.

Those who feared that Lake Lewisville would be fracked have reason to celebrate.

The U.S. Bureau of Land Management's New Mexico State Office recently announced it had deferred the 259-acre parcel of Corps of Engineers land at Lake Lewisville set to be auctioned April 20 for oil and gas leasing.

Last we knew in early February, the BLM was offering oil and gas leases under and beside Lake Lewisville and two other Texas lakes at a New Mexico auction April 20. The lease offers also included 31,000 acres in Davy Crockett, Sam Houston and Sabine National Forests in East Texas.

Crowds of North Texans concerned about the Lewisville sites turned out for hearings in at least five communities, all of which filed protests with the BLM. A geologist and Highland Village resident showed several audiences maps of ground features that indicated an underlying fault near the already damaged Lewisville dam that might be activated by fracking.

The U.S. Forest Service officially cancelled the proposed oil and gas lease auction for tracts in Davy Crockett, Sam Houston and Sabine National Forests, in response to protests over failure to follow its own rules on public notice, as well as risks to water quality and wildlife. Texas’ national forests already contain tracts that have long been leased to lumber companies, many employing clear-cutting that degrades plant and animal communities native to true forests.

On February 26, conservation groups filed a second formal protest for the remaining 5,700 acres in Texas, Oklahoma and Kansas that contain federally owned fossil fuels. Auction of that acreage “would enable fracking near and beneath Lewisville Lake, Somerville Lake and Choke Canyon Reservoir, which would threaten to contaminate drinking water for millions of people in Dallas-Fort Worth, Denton, Brenham and Corpus Christi,” wrote Sierra Club’s Texas director, Reggie James.

The BLM’s amended auction notice includes 19 parcels, down from 43, totaling about 5,325 acres at its quarterly oil and gas lease sale scheduled for April 20, 2016, at the Marriott Courtyard in Santa Fe, New Mexico. These parcels are distributed over a three state area as follows: 6 parcels totaling 880 acres in Kansas, 5 parcels totaling 1,426 acres in Oklahoma, and 8 parcels totaling 3,019 acres in Texas.

A copy of the amendment to the BLM's April oil and gas lease sale notice is available here.

North Texans push back against fracking at Lake Lewisville