The new DFW Air Research Consortium is hosting three information events this week in Dallas, Fort Worth and Denton.

Just when you thought environmental news couldn’t get any worse - a weird thing happened. Good news started trickling in here in North Texas.

This week, a new grassroots coalition called DFW Air Research Consortium is unveiling an ambitious area-wide initiative in the fight against air pollution in DFW.

You can hear all about it by attending one of the free events hosted by DFW ARC founding member Downwinders at Risk, the 23-year-old clean air advocacy group.

The Science and Socializing for Cleaner Air mixers will be held in Dallas, Fort Worth and Denton, June 22, June 26 and June 28.

“The state is out of the air quality business,” said Jim Schermbeck, the director of Downwinders at Risk. “We need to become more self reliant on this issue.”

According to its mission statement, DFW ARC is a network of academic institutions, non-profit organizations, communities and local governments committed to using state-of-the-art technologies to advance understanding of local air quality, provide residents the best information about their air quality and develop innovative applications in support of improving the health and quality of life for all North Texans. 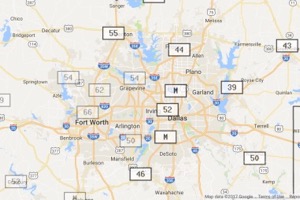 The do-it-yourself effort at fighting DFW air pollution grew out of frustration, said Schermbeck. The region has been out of compliance with federal clean air standards for more than 25 years. Meanwhile, the state’s current clean air plan, already deemed too weak by clean air advocates and some local officials, is stuck in limbo, still unapproved by EPA.

“There are only 20 smog monitors for all of North Texas, half of which are used in rural areas for boundary readings,” said Schermbeck.

That’s spread across more than 9,000 square miles of the 13 county-area, which is home to 7 million people. Notably, Schermbeck points out, there is no monitor in Wise County, where he suspects the highest pollution levels occur due to extensive fracking and wind currents that carry urban air pollution to the area.

“The state has no interest in identifying smog problems when it doesn’t put a monitor out where the pollution is probably the worst.” 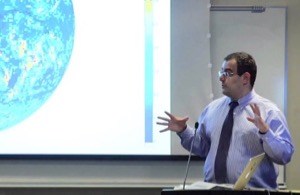 Dr. David Lary, a professor at the University of Texas at Dallas, is leading an air monitoring project in the running for a National Foundation Grant. Courtesy of UTD.

The DFW ARC coalition was formed after Downwinders won an Earth Day Texas grant to buy air monitoring equipment to gather data in Wise County. That led to meeting Dr. David Lary, a researcher at the University of Texas at Dallas who was working on a project to use a network of air monitors to pinpoint pollution and pollen hot spots to improve the community’s health.

Lary in turn bought in Dr. David Sterling at University of North Texas Health Science Center who was working with the Fort Worth League of Neighborhood Association on similar research to track air pollution locally.

Tamera Bounds, a Downwinders board member and director of Mansfield Gas Well Awareness, said soon researchers from Texas Christian University and University of Texas at Arlington heard about what they were doing and also wanted to get involved.

Leslie Allsopp, a graduate research assistant and doctoral student working with Sterling, said the bottom line is DFW’s 20 ozone monitors do not provide a detailed picture of pollution.

“Regulatory monitors are very accurate but they are designed to assess background levels of pollution. They let us know if policies are generally effective but they can’t identify exposure at a particular place or time,” said Allsop. 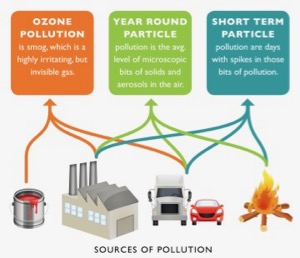 “Our existing air quality network does not have the capacity to capture that information.”

When pollution sources are pinpointed, then steps can be taken to mitigate their effects. That could mean anything from navigating around an area to building barriers to planting more trees.

Allsop said the coalition is important because it brings together diverse perspectives, pools resources and ensures efforts won’t be duplicated.

“We don’t want someone in Dallas or Fort Worth or Denton working by themselves,” said Allsop. “We all share the same air and we are stronger when we collaborate.”

Those who attend the events this week can learn more about the group’s pilot projects in the works.

This year, DFW ARC, led by UTD requested a prestigious 2017 National Science Foundation grant for $3 million to establish an air quality monitoring program in southeast Fort Worth and Plano.

Thanks to a grant from Earth Day Texas, UTD, the UNT Health Science Center and other ARC members are working on placing 10 air quality monitors at local schools in the DFW area in partnerships with local school districts.

Meanwhile, ARC member Downwinders at Risk with help from another Earth Day Texas grant is gearing up to put its own smog monitors in Wise County.

Schermbeck said this progress is the silver lining on the anti-environment cloud floated by the current state and federal administrations. It has inspired what he sees as a better and more effective system.

“This kind of leap frogs over the state,” said Schermbeck. “It’s caused the creation of a vastly superior network that will essentially take over the state’s job.”

Science and Socializing for Cleaner Air

About: Learn about the latest air pollution solution from the researchers, municipalities, organizations and volunteers behind it.