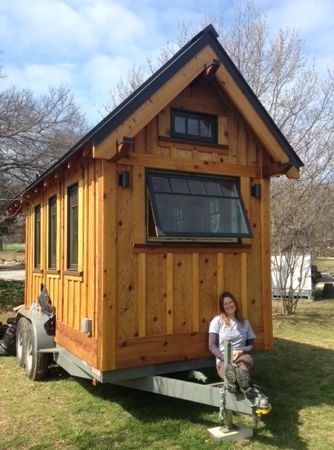 B.A. Norrgard will be showing off her tiny house and talking about her sustainable lifestyle at Earth Day Texas April 26-27 in Centennial Hall. Photos courtesy of B.A. Norrgard.

In Dallas everything is big. But Dallas resident Beth Ann Norrgard wants to change that.

At Earth Day Texas April 26-27 at Fair Park, she’ll be demonstrating the benefits of living small with her recently completed 112-square-foot house.

Sarah Susanka started a trend toward smaller houses when she published The Not So Big House in 1997. Later, Jay Shafer, founder of Four Lights Tiny House Company, took it to a “smaller” level with his tiny house plans. 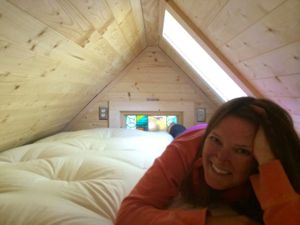 In 2011, Norrgard, known as B.A., had been a paralegal for more than two decades when she discovered the tiny house movement online. At the time, she was living in an 1,148 square-foot 1929 Tudor home adjacent to Lakewood in Dallas.

Right, Norrgard spent her first night in her house last week during the lunar eclipse.

“I became dissatisfied of the round robin of going to work, getting a paycheck, buying things, arranging said things, and then going back to work. I signed up with a career transition counselor.”

After months of soul searching, she discovered new talents and realized she wanted to not only live in a tiny house but make tiny houses her career. In 2013, she founded A Bed Over My Head, to serve as an example of sustainable living and start a grass roots movement for a tiny house community in Dallas.

“I really believe that Dallas is ready for a tiny house community,” she explains. “I think it would be so amazing if we had the first tiny house urban community in Dallas – a city known for big. It would really demonstrate that Dallas is forward thinking, doing the unexpected and that we can break the mold.” 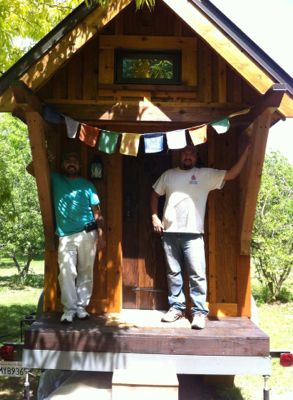 Norrgard purchased her tiny house floor plan called The Gifford, from Four Lights Tiny House Company in 2012. A longtime Habitat for Humanity volunteer, the 47-year-old initially planned to build it herself but discovered Mentoring A Girl In Construction, a program that prepares high school girls for the construction industry in California, who helped with the framing.

Inside, the house is finished out with 3.5-inch rigid foam insulation with radiant barrier and spray foam in the walls and ceiling, along with reclaimed hand-scraped red oak hardwood floors, a pantry, two closets, three bookcases and a window seat with storage.

“I also have a cute little porch on the front and a special outdoor outlet under the eaves for a strand of Christmas lights for the holidays,” said Norrgard. “I have all the comforts of home condensed into a tiny mortgage-free space.”

In addition, the kitchen sports a bamboo farm sink, magnetic spice rack and a wall herb garden, and she will cook on an induction burner and in a toaster oven. There is also space allotted for a refrigerator, but she says she is experimenting with living without one to see if she can do it. The bathroom is a wet bath, which means when she showers the entire room gets wet, and the toilet is a composting toilet.

“If you count the items that were donated and I did not have to pay for, my costs would probably be $30,000. That’s material only, not my time building.” 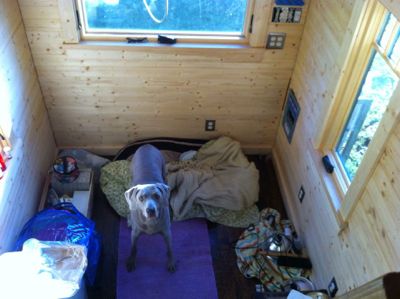 As for the future, Norrgard and her weimaraner named Greta plan to hit the road with their tiny house, which is mounted on wheels. She skipped installing an air conditioner, hoping to follow favorable weather.

“My business plan is to travel in my tiny house and teach tiny house workshops, park my house where someone else is building their tiny house and help them build, do guest speaking about living sustainably, and be a facilitator for others who want to transform their lives.”

But first, event-goers can stop by and tour her tiny house at Earth Day Texas where she’ll be touting the benefits of living tiny and sustainably.

“Change is scary, but regret is much worse. Despite all the changes I have made in the last two years, I have zero regret; I am the happiest I have ever been in my life.