Dallas vs. Copenhagen: A Conversation on Sustainable Urban Practices

(Photo: The Strøget in Copenhagen has become a global model for sustainable or green urban transportation practices. Patrick Kennedy of Car Free in Big D reflects on what DFW has in common with, and might learn from, Copenhagen) 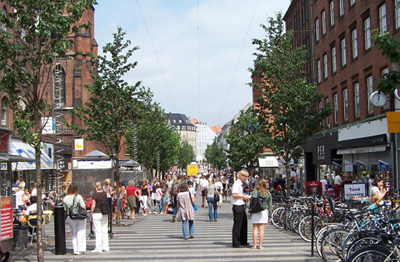 By Patrick Kennedy of Car Free in Big D

Re-published with Permission March 22, 2012 (the original posts on Car Free in Big D can be read here)

Hmm...perhaps not a fair fight. But based on this brief article about the five cities most dedicated and perhaps most successful in their shift towards a green urbanism, I found a few relevant numbers on Copenhagen:

Copenhagen has goals. Definable, measurable goals. Some of these include: 0, zero, nada traffic related fatalities for an entire year.as well...they would like to get 50% of commuters onto 2-wheels instead of 4.

Oh, and Copenhagen is also home to some of the highest per capita incomes, access to healthcare, education, some of the self-reportedly happiest people in the world, and some of the best educated. But dipping into those factors is fighting dirty (and possibly interrelated).

Copenhagen is not Dallas, and that's a good thing. It allows us to know where we are and think critically about what are and should be the real steps forward towards something other than a city that is badly falling behind in its market appeal. This is critically important with regards to the Millennial generation.

Millennials are roughly early thirties and down (lines are blurry in generational studies). They are also the next leaders, business builders, JOB CREATORS!1!, etc. They are also as large in terms of numbers and effect on the economy as the baby boomers. They will transform the city in the way that suits them the same way Boomers did. Except just the opposite way. 77% of them desire walkable urbanism.

I spent 8 days in Copenhagen partying and studying about 5 years ago. It is admittedly an unfair comparison, but it has a point to show just how far Dallas has to go and, perhaps more importantly, that we seem to be spinning in circles without clear direction. Copenhagen is a highly livable city (as every ranking EVAR shows).

Copenhagen is famous for its car-free area in the center of the city known as Stroget, which has incrementally, steadily, and consistently been increased in size and reach year by year. At first, the business owners fought against it. And of course they did, businesses are generally adverse to change, especially if they're making money. It's the ones not making money that embrace change.

The businesses making money are specifically adapted to the status quo, and thus they're reticent to accept suggestions for "improvement" such as making the street their business is on car-free. They couldn't fathom how their customers would get to their business. What they assumed was that everybody had to drive, that their market shed was regional rather than local. However as it turned out, once the streets were more desirable and more amenable, the streets could hold more people than cars. And once the popularity rose, it not only grew beyond a local draw to a regional draw, but after several decades, even an international draw (see: my visit).

However, this would not work in Dallas. Not yet. And likely not for a few decades. We're in a far different point in the spectrum of urban development. Copenhagen didn't fundamentally alter their network when cars came to dominate the streets. We ripped ours apart.

But we can learn from their initial effort towards relocalization. Our transportation network favors regional movement at the expense of the local. Value = local integration + global integration. Only Global Integration often has a negative impact on local. Big roads, railroads, airports, etc. detract from local neighborhoods. This is why in the best cities, the relationship between regional/global infrastructure is tangential to the actual fabric of the city. The baby is not sacrificed for the bathwater.

We too have to slowly unwind, but we can't simply do what they did and take the cars off as some have suggested with Main Street. This would exasperate the problem. One of downtown's biggest problems is that transportation choice is limited, particularly for the car in terms of route. We're forced only onto certain roads as the power of the grid and its ability to diffuse traffic and the associated negative impact on streets by destroying the grid. Closing Main to traffic means more traffic is shifted over to Elm and Commerce, further boxing in and fragmenting the areas that do succeed.

We have to accurately calibrate where we are and what the underlying issues are. Simply seeing what other places have done and attempting to duplicate it locally will only have limited success. Such is the nature of supply-side urbanism. The effort (time/money) vastly exceeds the returns. Instead, we should be looking at ways to increase transportation choice, of route and mode, by strengthening the complexity of the grid network. The network is the golden goose.

Patrick Kennedy is a professional Urban Planner & Designer. Among his other responsibilities he manages Car Free in Big D, a popular blog focusing on urban sustainability issues in DFW.