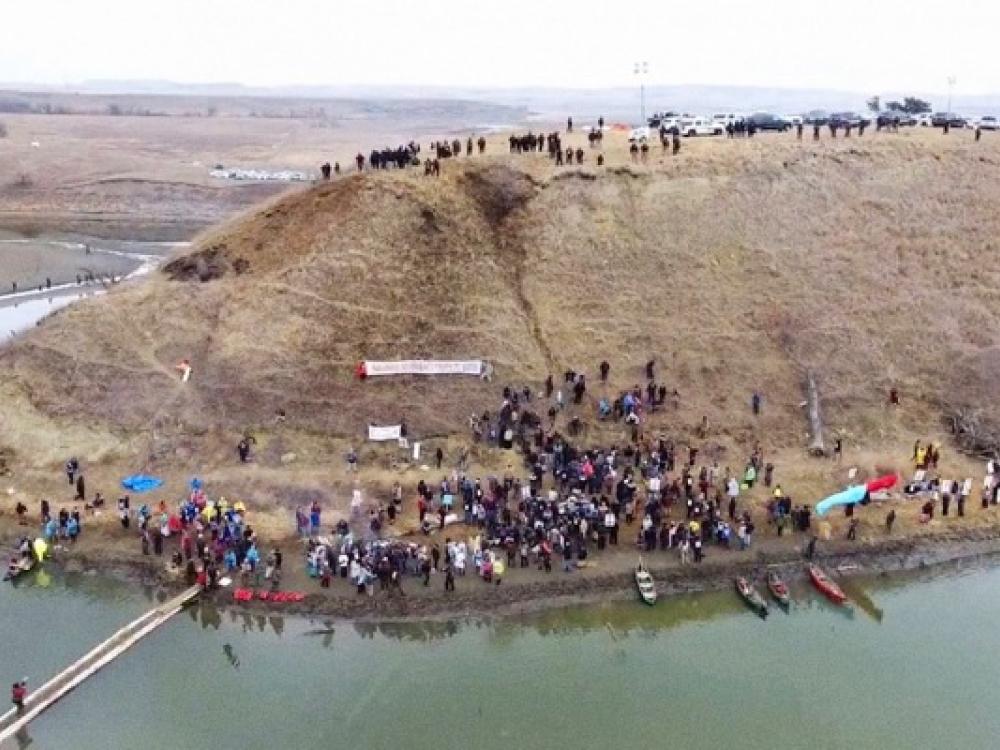 Green Source DFW and the Memnosyne Institute held a screening of 'Awake' on Monday. The documentary about the Standing Rock protest is now available on Netflix. Courtesy of Awakethefilm.org.

One positive thing to come from the anti-fracking movement has been the reawakening of Native American cultural pride and power. The nearly year long Dakota Access Pipeline protest led by an indigenous coalition known as the Water Protectors from April 2016 to February 2017 has inspired people around the world to stand up to Big Oil.

The film Awake captures what it was like inside the historic protest, using poetic narration by Floris White Bull and footage shot by Native American filmmaker Myron Dewey, along with Emmy Award winning filmmaker Josh Fox and James Spione.

The film, screened Monday night by Green Source DFW and its parent nonprofit the Memnosyne Institute, was shown in Dallas on the anniversary of one of the most brutal confrontations during the standoff. The documentary shows footage from the November day when the peaceful, unarmed protestors were sprayed with water cannons in sub-freezing temperatures, doused with tear gas and pelted with rubber bullets.

Following the screening, Mary Ann Thompson-Frenk, cofounder and president of the Memnosyne Institute, hosted a panel that featured three indigenous activists, including Yolonda Blue Horse, Dallas-based cofounder of Society of Native Nations; Juan Mancias, tribal chairman and tribal administrator of the Carrizo/Comecrucdo Tribe of Texas; and Michelle Cook, a lawyer for Native American rights who assisted the DAPL protestors.

The speakers each shared their experiences in the movement and invited those in attendance to join the resistance.

Cook urged people to divest in corporations and banks that support fossil fuels while encouraging those listening to reclaim their power.

“There’s 8 men who have the majority of the wealth in the world. There’s a 140 corporations who control everything. There’s 'millions' of us,” she stressed.

Thompson-Frenk added that she came from a powerful business family and said powerful business leaders like Kelsy Warren, CEO of Dallas-based Energy Transfer Partners, which built DAPL, can be shamed into changing.

“As citizens of Dallas, we need to put pressure on people in our communities like Kelsy Warren.”

Blue Horse agreed adding that most of us already have the courage to stand up to power, we just don't recognize it.

“You’re already doing it when you call up the cable company after they don’t show up after you took off work and waited all day or your order from [a restaurant] is not right. You just need to do it for bigger things.”

Mancias said we need to start by looking at the language we use today, which lacks the spiritual sense that Native American languages have.

“We need to de-colonize ourselves.”