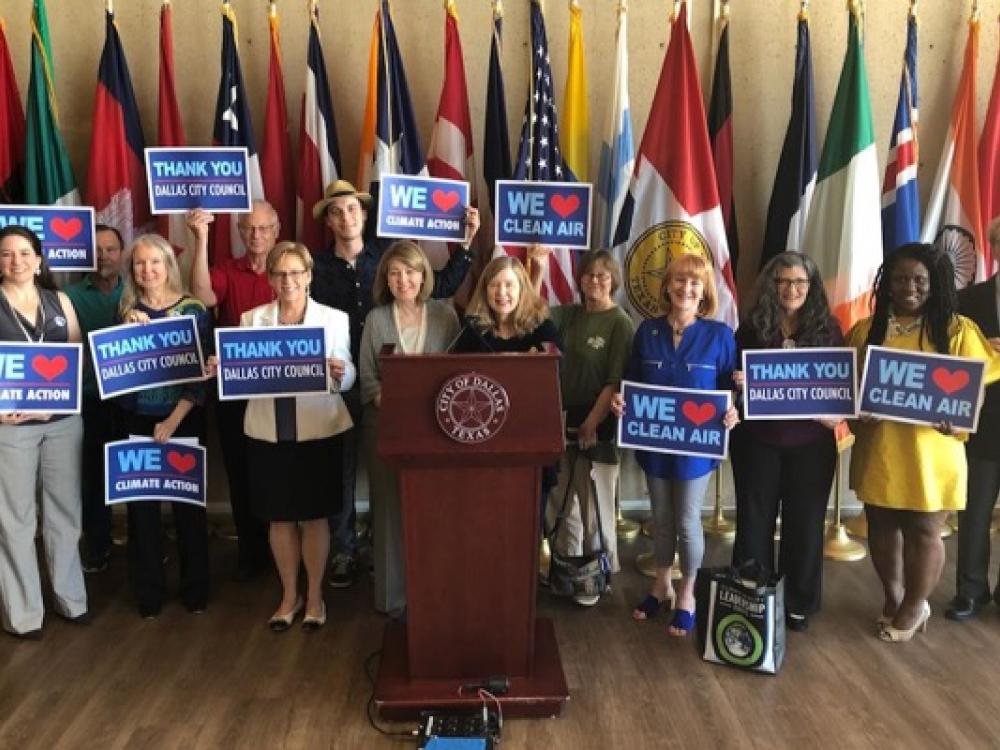 A coalition of local environmental activists pushed for the Climate Plan amendment to be included in the Dallas city budget. Courtesy of Rita Beving.

It was a 180-degree turn from past eras at City Hall.

“I couldn’t imagine even 12 months ago being where we are today,” said James McGuire, managing director of the newly consolidated Office of Environmental Quality and Sustainability, which is in charge of the climate plan. “There’s really been a sea change in the way that our Council and City manager address issues like this, in empowering us… to reach our climate change goals”

For months, green advocates have been pushing Dallas to cut carbon emissions, speaking out at City Hall and Town Halls across the city. After two prior unanimous yes votes in committee, the climate plan amendment moved on to City Council and was approved Sept. 18 as part of the budget.

Only seven of more than 109 budget amendments made it into the finally adopted 2018-2019 budget. 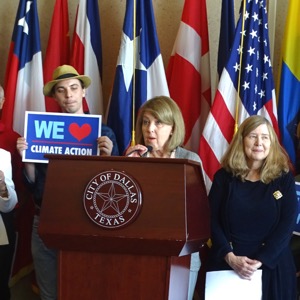 “I was happy to push for the inclusion of this climate plan amendment,” said Greyson. “I believe that this plan will not only help reduce harmful greenhouse gases in our city, but will also help us reduce other harmful emissions that affect the health of our community.”

Mayor Mike Rawlings signed the Mayors National Climate Action Agenda, along with more than 300 mayors, at President Trump’s announcement of U.S. withdrawal from the Paris Agreement in 2017.

“With no current state or federal action on climate change, it is apparent that local governments must shoulder the burden," said Rawlings in a statement. "The City of Dallas accepts this responsibility and is actively working towards building a greener, more resilient city. Addressing climate change should not be a controversial or partisan issue, and local leaders and the marketplace should work together in pursuing climate action."

“That’s why I am excited that we have approved funding for a Comprehensive Environmental Action Plan. The City’s Office of Environmental Quality and Sustainability will have the resources and responsibility to chart a path of environmental and climate action for the coming years in alignment with the goals of the Paris Climate Agreement.”

Molly Rooke of Dallas Sierra Club and organizer for Dallas chapter of 350.org, the U.S.-based international climate action group, described the anticipated Climate Action Plan process on behalf of other stakeholders in the effort and the Office of Environmental Quality and Sustainability:

“The climate plan will be developed in partnership with the Office of Environmental Quality and Sustainability, a well-qualified consultant, and a public process including stakeholders from business, academia, health, environment and other leaders throughout the community. The plan will include actionable and quantifiable measures [for] a broad spectrum of [sources], including transportation and transit, solid waste, building codes, energy purchases and use, and more, including climate and urban heat island initiatives in the Resilient Dallas plan.

"The budget allocation includes a consultant to help assess and analyze the most prudent and cost effective measures…. It will also help [consolidate], make more effective and get credit for initiatives in other City of Dallas departments that have climate impacts.

"It will move forward with the support of the local community who will help, not only with its planning, but also with its implementation.”

“This plan will have huge positive health impacts, saving lives and improving our quality of life. It will make Dallas a better place to live and work, and more attractive to new and clean businesses and jobs, all while reducing Dallas's greenhouse gas emissions and putting Dallas in the ranks of other world-class cities doing so.”

Rita Beving of Public Citizen, the national consumer advocacy nonprofit, noted that five other Texas cities have signed on to protect climate, with the Mayors National Climate Action Agenda.

In a later interview, McGuire gave an update on the status of climate efforts already underway in the Office of Environmental Quality and Sustainability.

“Data collection for the greenhouse gas inventory is 95 percent complete and will be ready to present [to a Council committee] before the end of the year… It gives us a framework to see where we need to be reducing emissions, and where we can do the most good short-and long-term.”

“We’ve been reviewing other cities plans, benchmarking ourselves against them… We prepared a request for qualifications. The first step to get a well-qualified consultant on board to supercharge our planning efforts. Experienced environmental consultants, with experience in climate change and helping governments reach their climate action goals..”

How did the shift to stronger climate action come about?

“It’s a confluence of events, I think,” said McGuire. “A change in viewpoint by Council, alignment of a department that brings together all the environmental functions of the City…and then there’s the voices of the citizens that caused this thing to get funded and started right away.”

“I got lots of phone calls from people [City officials] saying, ‘We had more folks come and talk about climate change planning at our budget town hall.’ Speakers were numerous, and people noticed.”

“I think things led to people shifting in Dallas, significant weather events that were worsened by climate change…and a real reaction to the federal government moving out of that space. You go to Council meetings, and you hear members saying, we need to be doing more, because we’re seeing less from the federal government with respect to the environment.”